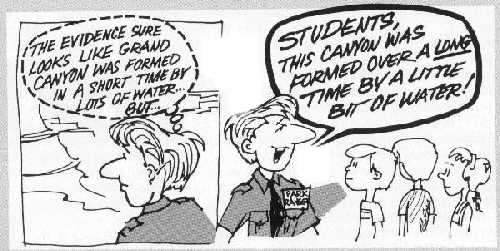 Each year ICR conducts an exciting and thrilling tour to the Grand Canyon and surrounding areas. I had the privilege, this year, of speaking at the worship service on the rim of the massive canyon itself.

Three million people visit the canyon each year and, sadly, when they ask what the stones (layers) mean, they are told that this is the work of millions of years of slow processes—that these rocks contain the record of the evolution of life. But what do these stones really mean? What should Christians think of as they view this Canyon of canyons? This was my topic for the service on the rim.

In Joshua 4, we read how the people of Israel were able to cross over the Jordan River because of a miracle from the Lord. God stopped the flow of the waters to enable them to traverse the river as if they were walking on dry land.

After they had crossed over into the land of Canaan, the Lord commanded Joshua to construct a memorial of twelve stones, "that this may be a sign among you, that when your children ask their fathers in time to come, saying, What mean ye by these stones? Then ye shall answer them, That the waters of Jordan were cut off before the ark of the covenant of the LORD; when it passed over Jordan, the waters of Jordan were cut off: And these stones shall be for a memorial unto the children of Israel forever." (Joshua 4:6, 7).

Our Lord understands that we, as feeble, sinful humans, are only too apt to forget the great things He has done for us. Not only are we likely to forget, we are also likely not to tell the next generation of the things of God, as we ought to do.

In this story, we have the setting up of a memorial composed of twelve stones taken from the bottom of a normally fast-flowing river. What greater evidence of the miracle could one wish for?

There is another great memorial on this earth that God has left for us. Indeed, it is one of the greatest memorials of His work that we possess. If only the Christian church took God at His Word, it could be used as one of the great reminders of the power of God, and as a vivid warning that God is not only a great God of love, but a God who is also Judge.

Think of the billions of dead things buried in rock layers laid down by water over most of the earth—billions and billions of dead life forms! We call them fossils—the preserved remains of animals and plants buried under catastrophic conditions. Yes, Noah's Flood has left its mark indelibly on, and within, the earth's surface. As we look at the Canyon, we see layer upon layer of rock that contains millions of dead things (fossils). As creationist geologists, such as our own Dr. Steve Austin, so clearly have pointed out, these layers are not the result of slow processes over millions of years. The evidence from the layers is consistent with their having been laid down catastrophically, by the hydrodynamic action of water—exactly as we would expect from the worldwide Flood of Noah. God is a God of judgment, and so, when men did not heed the warnings of His Word, God judged that wicked and perverse world with a catastrophic, worldwide flood.

However, the twisted and contorted rock layers, full of fossils, should also be a great reminder of the love of God, for God delayed the outworking of His righteous anger and waited patiently for 120 years, while Noah built the Ark and preached to a pagan world—on the one hand not wishing that any should perish, and on the other, that no one would have the excuse that they were not warned. And, of course, God saved Noah and his family because they were righteous, through faith in God's Word.

Even in judgment, God was gracious, for, during the devastating catastrophe of the Flood, masses of vegetation and animal remains were buried in layers which later became coal, or generated oil, that now provide electricity and warmth for our homes and fuel for our civilization. Volcanic action and earth movements formed deposits of metals that can now be mined and that comprise the backbone of our modern technology. Out of judgment, God lovingly provided these things for us.

So the evidence for this catastrophic Flood judgment is unmistakable and overwhelming—it is all around us. The evidence is crying out at us—the very stones are crying out! We read in Job, "…Speak to the earth and it shall teach thee" (Job 12:8). While the rocks containing these dead things are crying but that God is Judge, they should not only be a reminder, to us of the past Flood judgment, but should also be a warning to us that God will judge again.

Jesus Christ, in Matthew 24:37-39, used the fact of Noah's Flood as a basis for saying that just as He has judged once by water, so He will just as surely judge the earth again—next time, by fire.

What has this to do with the Grand Canyon? Sadly, today, when many of our children look at the layers of the Grand Canyon and ask, "What are these stones? What are these fossil bearing rocks?" they are told, by most parents and teachers, that these contain the remains of animals that have struggled over millions of years in a fight for survival that has led to man's evolution. Our children are not being reminded of God's love and God's judgment. The right information is not being passed on to the next generation.

But what a tremendous witness is given by these stones of the Grand Canyon! What a powerful witnessing tool! When people ask, "What are these stones?" this can open the way for us to tell them that they constitute a reminder—a memorial, to make sure we remember and never forget that God once judged this world by water, and that He is coming to judge again—next time by fire. Each person will then have to stand before the God of Creation to give account of his or her life.

In II Peter 3:3-7, we are told that in the last days men will deny that there ever was a worldwide Flood, and thus deny that there is a memorial to remind us of God, who judged with water. As the Word of God teaches, in Hosea 4:6, "My people are destroyed for lack of knowledge." Let us not be held to account before the Lord for not passing on correct knowledge to the next generation.

If you are not familiar with the evidence from the Grand Canyon, and don't know how to explain this in terms of the Biblical Flood, then why not come with us to the Grand Canyon on the next ICR tour? Not only is this an enjoyable and exhilarating experience, it is a time for fellowship and learning. Knowledgeable Christians are much better able to defend their faith!

I personally have learned so much from the Canyon. There is nothing like experiencing this first-hand, and then having the information at one's fingertips to confound those who try to defend the crumbling theory of evolution.

More The Laws of Science Require a Creator

Gravity
Introduction Gravity holds us firmly on the ground and also keeps the earth circling the sun. It draws rain from the sky and causes the tides. This mysterious...
BY: DONALD B. DEYOUNG, PH.D.

Is It Scientifically Impossible For Miracles To Occur?
The world operates on a daily basis according to natural law, without any supernatural overriding of natural processes. A miracle could thus be something...
BY: JOHN D. MORRIS, PH.D.
More Nature Reveals God's Protection
Mending Mistakes - The Amazing Ability of Repair
If someone were to ask a creation scientist for evidence of creation, he may very well reply, "The DNA molecule." Everyone has heard...
BY: FRANK SHERWIN, D.SC. (HON.)

Habitable Zones
When speculating about life in the universe, scientists need to be more realistic than Hollywood. In Star Trek, no matter where the actors land, they can...
BY: DAVID F. COPPEDGE

How Could Noah and His Family Care for the Many Animals.,.
Detractors from the Bible story of the Flood have scoffed at the idea of just a few people carrying out all the duties of animal care for a year. Without...
BY: JOHN D. MORRIS, PH.D.
More Unique Environment for Life

Have Scientists Found Life on Venus?
Secular scientists are obsessed with attempting to show that life on Earth is not unique and therefore must exist, if not elsewhere in our solar system...
BY: FRANK SHERWIN, D.SC. (HON.)

Astrobiology: Follow the . . .
"Astrobiology" is a curious science. Like its predecessor "exobiology" it is, as George Gaylord Simpson once quipped, "a...
BY: DAVID F. COPPEDGE

Dumbo Octopus, God's Wonder in the Deepest Deep
About 3,000 years ago, the Bible taught that the “wonders in the deep” are the “works of the Lord.”1 Now that truth...
BY: JAMES J. S. JOHNSON, J.D., TH.D.
More Impact