The world immediately after the Genesis Flood was considerably different than it is today. The crust of the earth ripped apart, continents moved around, hot magma spewed into the ocean, water inundated the entire globe, sediment was deposited over most of the land, volcanoes threw ash into the air, mountains rose to the sky, land animals died, forests were destroyed, much of ocean life was killed, and heat and salt were added to the ocean.

The Flood was so catastrophic that it took hundreds of years for geologic, climatic, and biologic conditions to develop a new equilibrium. Geologic activity was extremely violent at first, but decreased with time. Trees, shrubs, and grasses sprouted from the roots and seeds buried in the sediments left behind. Animal populations grew from the brood stock that left the Ark and spread over the earth. Snow formed glaciers and ice sheets from evaporated moisture of the warm oceans. As the oceans cooled, most of the ice melted, and glaciers and ice sheets remained only in polar regions and on mountain tops. The geologic, climatic, and biologic activity eventually established a new equilibrium within a couple thousand years after the Flood.

During the period when the oceans were still hot, hurricanes formed and likely grew into massive storms called hypercanes. They caused devastation on the continents as they moved from the oceans to the land. Heavy rainfall from the hypercanes over large areas of unconsolidated sediments with little vegetation produced incredible amounts of erosion, particularly along the eastern coasts of the continents. The eastern parts of North America, Asia, South America, Australia, and Africa, along with Indonesia and the islands of the Pacific, were probably the most heavily affected.

For over ten years, ICR conducted numerical simulations of hurricanes and their development into hypercanes in an attempt to understand what the world was like when Noah stepped off the Ark. Reports have been published on Hypercane Florence,1 Hypercyclone Gonu,2 and Hypercanes Charley and Fay.3 These simulations showed how hypercanes grew and moved in response to a warm ocean. 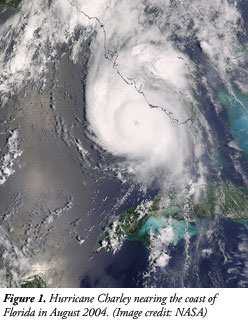 Charley, a category 4 hurricane, crossed the coast of Florida near Port Charlotte, traveled diagonally northeastward across the state, and exited the peninsula near Daytona Beach in August 2004 (see Figure 1). At its peak intensity of 150 mph, Hurricane Charley first struck Sanibel and Captiva Islands, causing severe damage in both areas. Charley, the strongest hurricane to hit southwest Florida since Hurricane Donna in 1960, then continued to produce additional damage as it made landfall near Port Charlotte. The hurricane devastated the small cities of Punta Gorda, Port Charlotte, Arcadia, and Sebring. (It also damaged the home and museum of ICR writer and speaker Dr. Gary Parker.)

Ultimately, the storm passed through the central and eastern parts of the Orlando metropolitan area, still carrying winds gusting up to 106 mph. Damage in the state totaled over $13 billion. Charley, initially expected to make landfall farther north in Tampa, caught many Floridians off-guard due to a sudden change in the storm’s track as it approached the state. In total, Charley caused 10 deaths and $15.4 billion in damage, making Charley the second costliest hurricane in United States history at the time (it has since dropped to fifth). Damage would have been much more severe had Charley not been a very small, fast-moving storm.

Hurricane Charley was one of two hurricanes recently selected by ICR for simulation of hurricane development and movement under warmer-than-normal sea-surface temperatures near Florida. Tropical storm Fay was also selected for study; it crossed Florida along a similar path as Charley but was much weaker. The sea-surface temperature was artificially warmed to 104ºF from the actual observed temperature of 86ºF. An earlier finding that the world’s oceans were heated by the release of hot magma at the mid-ocean ridges during the Genesis Flood4 motivated researchers at ICR to study how hurricanes develop into hypercanes and how they move. Warm oceans cause hurricanes to intensify by adding moisture and heat to the storm. Hurricanes and tropical cyclones develop in tropical latitudes over the ocean during the late summer and fall in the Northern Hemisphere when the sea-surface temperature is the warmest. After the Genesis Flood, the oceans were much hotter globally and hurricanes would have been more frequent and intense all year round. 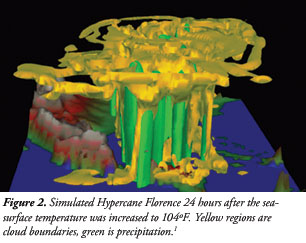 This researcher previously simulated the development of Hurricane Florence (1988) in the Gulf of Mexico and found that warm sea-surface temperatures caused the storm to grow from a weak hurricane into a hypercane.1 Figure 2 shows the simulated hypercane that developed one day after the sea-surface temperature was increased to 104ºF. Hypercane Florence formed deep convection, dramatically increased its rate of rotation, quadrupled its vertical and horizontal winds, and increased its precipitation rate to ten times that of the actual hurricane. Hypercane Florence followed the same track as the actual Hurricane Florence northward across the Gulf of Mexico from the Yucatan Peninsula to New Orleans. However, the simulation of Charley under similar conditions demonstrated that its track was completely different from the original hurricane. Figure 3 shows a comparison of the observed, simulated, and hypercane tracks for Charley. 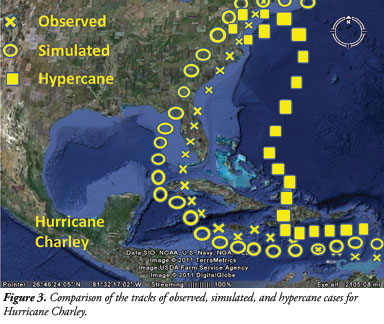 The pattern of heating used in the simulation was probably the reason for the different track of Hypercane Charley. A rectangular heating pattern was specified for Hypercane Florence between the Yucatan Peninsula and New Orleans that constrained the wind field over the Gulf of Mexico and permitted Hypercane Florence to move gently northward. However, the entire Gulf of Mexico and the Atlantic Ocean were heated in the simulation for Hypercane Charley, which is more similar to likely conditions after the Genesis Flood. Under this condition, the large temperature contrast between the land and ocean along the entire East Coast formed the large counterclockwise wind circulation shown in Figure 4 that steered Hypercane Charley away from Florida. This wind pattern also reduced the size and intensity of the hypercane because of strong vertical wind shear. Similar effects were found for Hypercane Fay and Hypercyclone Gonu in separate simulations. 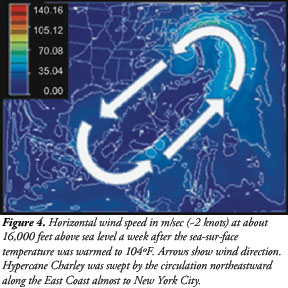 Hypercanes are not mentioned in the Bible, and no statement can be found anywhere in Scripture that says the oceans were hotter immediately after the Flood. But if the events of the Flood were as catastrophic as described in Genesis, then it is almost certain that major earth-shaking events like those described here occurred. If so, then it is also highly likely that a massive amount of heat was transferred to the ocean and that hypercanes were present for hundreds of years after the Flood. For those who have difficulty distinguishing clear statements of Scripture from scientific models built on a literal interpretation of Scripture, the concept of hypercanes is a good example. That does not mean such models are wrong, it just means they do not have the definitive authority of a statement from God about what occurred historically. They are derivative from such statements using logic and the scientific method.

God cared for Noah and his family by placing them on the Ark to escape the devastation of the Flood. They survived because the Ark floated on the surface of the ocean safely away from dangerous activity near the edges of the continents. But even after Noah and his family disembarked onto the mountains of Ararat, they remained safe from continued devastation. The Ice Age to the north and hypercanes near the coastlines to the east, west, and south after the Flood were far enough away that Noah and his family only had to deal with local and regional geological and meteorological readjustments. God selected the specific spot on the earth where He wanted Noah to land.

As Noah moved down the mountains of Ararat after leaving the Ark, he migrated toward the Tigris-Euphrates Valley, known as the Fertile Crescent. In this location, his descendants were able to grow plentiful food supplies for years to come and avoid continued catastrophes. If the Ark had landed near a coastline, it is likely Noah would have experienced frequent heavy rain, mudslides, extreme winds, and flooding. The Tigris-Euphrates Valley—present-day Iraq—looked considerably different than it does today. Unlike the dry, dusty desert present now, it was a rich, fertile, well-watered valley. God protected Noah and his family before, during, and after the Flood.

A statement in Scripture gently reminds us of His care when the world around us seems to be falling apart. After the Flood had “prevailed” for 150 days, utterly destroying “the world that then was” (2 Peter 3:6), He “remembered” Noah (Genesis 8:1). Not that God had ever forgotten Noah—“the term is a Hebraism for ‘began again to act on their behalf.’”5 God is always working for our good, even guiding us away from harm, as we follow His leading.