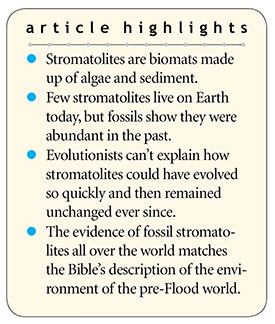 Stromatolites are some of the more puzzling fossils found throughout Earth’s rock record. They are fairly common in the oldest known sedimentary rocks, but living stromatolites only occur in rare isolated places in the world today. Only special conditions seem to allow these organisms to flourish, often involving unusual water chemistry. Uniformitarian scientists have struggled to explain their abundance in the ancient rocks and their paucity today.

The Glossary of Geology defines a stromatolite as “an organosedimentary structure produced by sediment trapping, binding, and/or precipitation as a result of the growth and metabolic activity of micro-organisms, principally cyanophytes (blue-green algae [cyanobacteria]).”1 The result is a finely laminated biomat that forms a mounded structure (Figure 1). This structure is not composed of the bacteria themselves but instead is a sediment-trapping mat formed by “biologically…mediated mineral precipitation.”2 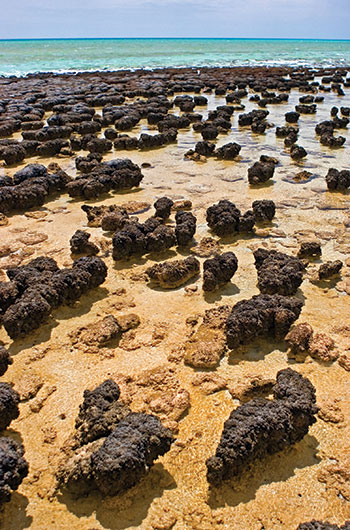 Stromatolites were first identified in the early 1900s in Paleoproterozoic rocks in Ontario, Canada, by Charles Walcott, former director of the United States Geological Survey. He thought the mounded structures were some type of ancient reef derived from algae. It wasn’t until the 1950s that paleontologists determined that stromatolites were in fact the products of biological activity.3 This was confirmed by the discovery of living stromatolites that same decade in Australia (Figure 1). However, a few recent authors have again suggested that some fossil stromatolites could have had a nonbiological origin.4,5

Evolutionary scientists claim stromatolites were some of the earliest life on Earth, dating them back as far as 3.7 billion years.6 The oldest undisputed stromatolites, from the Warrawoona Group in Australia, are dated by secular scientists as 3.3 to 3.5 billion years old.3 Fossil stromatolites are found all over the world in Archean and Proterozoic carbonate rocks (usually dolomite) and to a lesser extent in Cambrian and later strata (Figure 2). Evolutionary scientists have tried to explain the rapid decline in stromatolites in post-Cambrian rocks by attributing it to the sudden appearance of grazing organisms that presumably eat cyanobacteria.2 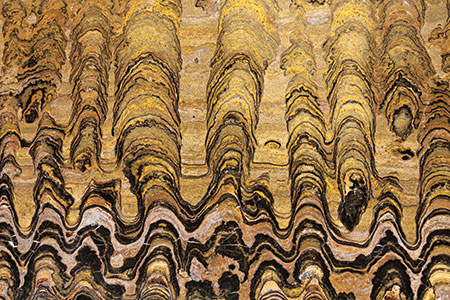 Because secular scientists believe stromatolites evolved about 3.7 billion years ago, it creates a significant problem for them in the timing of the origin of life on Earth.7 How could cyanobacteria have evolved so quickly? Life would have had to originate and develop the ability to photosynthesize and colonize in less than a billion years, assuming the earth is 4.55 billion years old.

But these scientists also believe that between 4.1 and 3.8 billion years ago Earth underwent a massive bombardment by meteorites, termed the Late Heavy Bombardment.4 This bombardment episode is supposed to have been a time of severe meteorite impacts striking Earth and the moon. These impacts would have obliterated much of Earth’s crust and any forms of life that existed before 3.8 billion years ago.

Secular scientists have, in effect, painted themselves into a corner. How can they explain the formation of the atmosphere, the oceans, the mysterious process of abiogenesis, and the ability to photosynthesize in a window of just 100 million years? Photosynthesis alone is an exceedingly complex process. For the evolutionist, this is a ridiculously short amount of time for this cascade of events to have occurred.7,8

Although secular science claims they go back billions of years, stromatolites show little if any evidence of evolution and no indication of great age. Modern stromatolites are considered an example of a living fossil, like the coelacanth. They seem to have thrived without any evolutionary change.

Secular science claims they go back billions of years, but stromatolites show little if any evidence of evolution and no indication of great age.

Scientists are now finding living stromatolite colonies in even more diverse environments. The latest research has identified them living on land in Australia in what has been termed a peat-bound wetland.2 Bernadette Proemse and her colleagues from the University of Tasmania, Australia, were the first to identify stromatolites living as “smooth mats of yellowish and greenish, globular structures growing on the wetted surface of tufa barriers.”2 The stromatolites were not submerged in water but rose above the surface of a calcium-rich, spring-fed ecosystem. This discovery means that living stromatolites are likely more common than previously thought. It may just be that scientists haven’t been looking for them on land near freshwater springs.

Recently, the ICR research team presented an interpretation of the pre-Flood geography based on a study of Flood sediments and their relative stratigraphic thicknesses. We assembled the map using data from over 1,500 stratigraphic columns spanning three continents.10 We chose a Pangaea-like configuration for our pre-Flood continents since that seems to best match the empirical data. 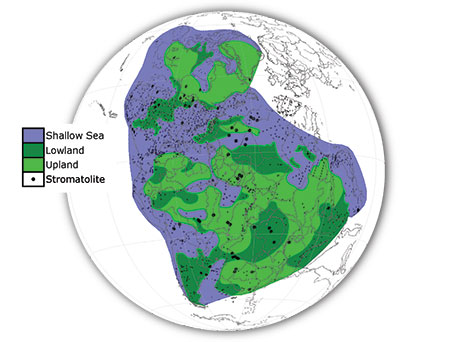 An examination of the map shows that the stromatolites seem to follow no particular environmental pattern. Their locations are found in regions that are interpreted as pre-Flood shallow seas, lowlands, and upland environments. Before the recent discovery of stromatolites on land, this interpretation would have seemed to be faulty. But now that modern stromatolites have been found living in fresh water, salt water, and also on land, it is not surprising that pre-Flood stromatolites existed in all types of environments. God tells us in Genesis 2:6 that before the Flood “a mist went up from the earth and watered the whole face of the ground.”

If our data-based interpretation is correct, the presence of fossil stromatolites confirm the pre-Flood hydrology as described in Genesis. That world must have had springs in great abundance to support the prevalence of stromatolites on every continent and in every type of environment. The springs watered both the uplands and the lowlands, providing mineral-rich waters in which the stromatolites thrived. God also created the perfect environments for stromatolites to grow in the pre-Flood shallow seas. These were also possibly fed by springs that provided hypersaline conditions similar to those found in Shark Bay today.

The history of stromatolites fits best with a recent creation and Flood as described in the Bible.

The history of stromatolites fits best with a recent creation and Flood as described in the Bible. Most creation scientists believe God created stromatolites as part of the original creation, probably on Day 3 of the creation week when He made plants. Stromatolites apparently proliferated in special pre-Flood environments and grew extensively during the 1,650 years or so between creation and the Flood.

Furthermore, creation scientists have proposed that the catastrophic nature of the Flood reshaped Earth’s surface sufficiently to destroy the pre-Flood environments where stromatolites formerly thrived.11 Today, it’s only in specialized environments that stromatolites are able to exercise their mat-making abilities and grow, whether on land or in the ocean.

The Flood also destroyed much of the pre-Flood stratigraphic record that contained the majority of the stromatolites. Only limited exposures of these ancient rocks are found globally in Archean and Proterozoic rocks. Of course, many likely remain covered by later Flood sediments, and others were undoubtedly destroyed by high heat and pressures associated with rapid plate motion and volcanism during the Flood event. But there are enough remnants preserved to indicate their abundance.

These recent discoveries demonstrate the accuracy and trustworthiness of God’s Word. Some people claim there are errors in the Bible and that its depiction of Earth history shouldn’t be trusted because it isn’t a science book. Yet, again and again true science demonstrates the truth of the biblical record. When the Bible discusses science, it is always shown to be correct, right down to the smallest detail.