A magnitude 8.3 earthquake recently struck deep below the Sea of Okhotsk in the Kuril-Kamchatka subduction zone just south of the Russian Kamchatka Peninsula and 950 miles north of Japan. It ruptured along a 110-mile-long fault about 378 miles below the surface where the Pacific Plate is being subducted, or pulled down, beneath the ocean crust.1 Though it’s been hailed as the largest deep earthquake ever recorded, the Okhotsk upheaval pales in comparison to the earthquake activity suspected during the great Flood. However, it does provide an excellent model of what may have transpired at the time of that catastrophic event long ago.

What perplexes scientists the most is the earthquake’s great depth. Publishing in the journal Science, Lingling Ye et al. noted, “The occurrence of earthquakes in the depth range from 400 to 720 km [250 to 450 miles] (the mantle transition zone) has long been enigmatic, given the immense pressure exerted by the overlying rock mass on any fault surface.”1

The velocity of the rupture was also surprising, given that it transmitted the energy away from the focus at 4.0 to 4.5 kilometers per second—nearly 10,000 miles per hour! Geologists generally believe when dehydration reactions release water trapped in sediments that it reduces the stresses and pressure on rocks at shallower depths (30–250 miles), allowing for fluid-assisted earthquake movement.1 However, at depths below 375 miles scientists aren’t confident as to what initiates incidents like the Okhotsk earthquake. They speculate that deep faults may shift as original fault-slip leads to frictional melting. This would create the runaway, or out of control, expansion of ruptures and subduction, the pulling under of plates. A cold-subducted plate may have been the key factor in allowing the Okhotsk earthquake to occur at such a great depth, according to the Science authors. The cooler, more brittle nature of the plate possibly allowed this event to behave like a shallower earthquake.1 Frigidity of the plates also indicates they had been subducted only a short time ago—if it had been millions of years they would be much closer to the temperature of the surrounding mantle.

John Baumgardner has proposed a similar model of runaway subduction as the driving mechanism for the great Flood. He pointed out that the pre-Flood seafloor was evidently completely destroyed during the year-long event and rapidly replaced with today’s young igneous ocean crust. He explained that “in regard to the fate of the pre-Flood seafloor, there is strong observational support in global seismic tomography models for cold, dense material near the base of the lower mantle in a belt surrounding the present Pacific Ocean.”2 This suggests that, during the Flood, cold plates were rapidly pulled down into the mantle, causing a thermal frictional envelope to develop around them by reducing viscosity (fluid-like thickness) in the mantle and “resulting in a sinking rate…higher than would occur otherwise.”2 And the plates subducted fast enough to create an entirely new seafloor during the year of the Flood.

Although maximum displacement during this recent Russian earthquake was about 9.9 meters (32.5 feet), there is ample geological evidence for some “superfaults” showing offsets greater than 100 meters (328 feet).3 Superfaults are rapid-moving slip events involving large offsets of the rock surfaces.

Perhaps the concept of a “superfault” is best understood by contrast with the notion of a “regular fault.” A modern magnitude 9 earthquake occurs on a “regular fault” with [a] displacement distance [of] less than 20 meters and a displacement rate of less than 0.1 meter per second. During the two-minute displacement event, friction on the fault generates heat. On the “regular fault” not enough heat is produced and retained within the interface to allow it to reach at least 1800oF, a minimum temperature needed to melt rock. Instead, the thermal conductivity of the rock around the fault allows the heat of friction to be transferred away from the surface. Rocks are converted to powder along the “regular fault” surface. However, a two-minute event on a “superfault” might have more than ten times the displacement distance and more than ten times the heat generation, allowing rocks to melt. The resulting “superquake” would be extraordinary, like none on Earth that humans have witnessed in historic times.3

The dark-colored, glassy material formed by frictional melting upon the superfault surface is called pseudotachylyte (PST). The presence of PST is considered evidence of high-speed rock movement during superquakes, where displacements occur much faster than during modern, high-magnitude earthquakes. The existence today of superfaults, pseudotachylyte, and superquakes are proof of global catastrophic tectonic activity in Earth’s present—and past.3

In our recent paper presented at the Seventh International Conference on Creationism, Steve Austin and I suggested that superfaults, and likewise this deep 8.3 magnitude Okhotsk earthquake, may develop in subduction zones as trapped water becomes supercritical, i.e., undergoes a change in chemical properties, creating a liquefied slurry (thick mixture of water and solids).3 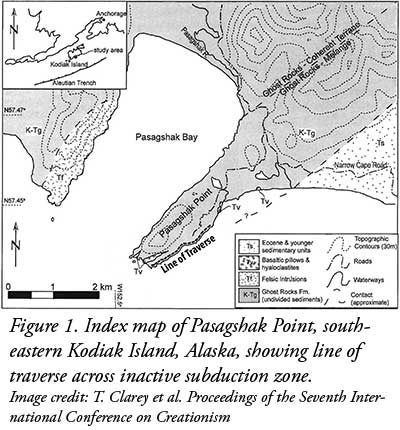 Subduction faults allow an entire seafloor plate to descend deep into the mantle of the earth. In a catastrophic superfault scenario, ocean sediment, ground water, and ocean water descend rapidly. This places ocean sediment and water into extreme conditions, causing them to become supercritical at just 750 degrees Fahrenheit and at pressures equivalent to a depth of only three kilometers (two miles). As friction upon the fault generates melted rocks or PST, the supercritical seawater expands to three times its original volume, loses its viscosity, deposits salts, and reacts corrosively with minerals on the fault.4 A slurry then develops along the fault surface. Perhaps the most significant element in fault dynamics is the expansion effect of supercritical water, which pressurizes and exerts tension on the fault surface. Buoyancy and pressure of the supercritical slurry could force it upward on the fault surface faster than the subducted rocks are descending. The melted silicate rock and supercritical water slurry, combined with the reduction in mantle viscosity around the subducted slab, make catastrophic plate subduction possible.2,3 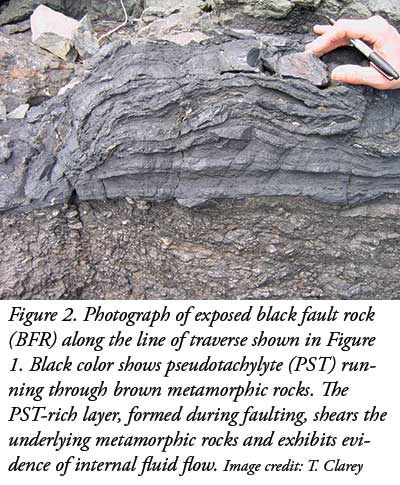 Do we find any empirical evidence of runaway subduction preserved on Earth’s surface today? The answer is yes. Superfaults and associated PST have been found and documented at many locations around the world, including several in subduction zone settings.3 One of these is Pasagshak Point, Kodiak Island, Alaska (Figure 1), where the PST is the thickest in the world. Christie Rowe and her colleagues were the first to report PST found there in individual layers exceeding 12 inches, with each inch of PST thought to represent over 30 feet of fault movement.5

The PST at Pasagshak Point is found within an inactive subduction zone along the southeastern edge of Kodiak Island. Francesca Meneghini and co-authors refer to these PST layers as “black fault rock” (BFR) (Figure 2). Some of the BFR is described as gray-black to blue-black rock devoid of foliation (i.e., mineral layering), possessing a conchoidal (glass-like) fracture pattern, and exhibiting a satin-smooth luster (Figure 3). The Kodiak Island PST required “extraordinarily large slip” and occurred in “repeated seismic slip pulses,” documenting catastrophic subduction.5,6 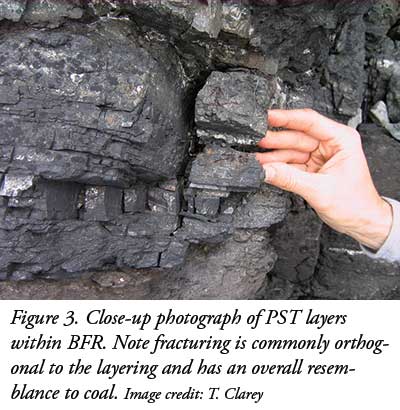 Superfaults containing pseudotachylyte, like the one at Kodiak Island, are some of the strongest preserved lines of evidence for the rapid subduction and catastrophic plate tectonic (CPT) activity that occurred during the great Flood. We can see the proof preserved in the rocks, in the seismic tomography, and in complex computer models. All testify of a real, global event that completely overturned the pre-Flood seafloor, creating a new world geography, separating the continents, and leaving behind billions of fossils as evidence of the catastrophic conditions that took place during the year-long biblical Flood. Today’s large, deep earthquakes like the one near Okhotsk are but small reminders of the watery catastrophe that took place just over 4,300 years ago.