Since the late 1980s, global warming has been hotly debated, with many arguing that Earth is undergoing potentially catastrophic man-made climate change. Is Earth getting warmer? Is such warming, if real, dangerous? And is it caused by human-produced carbon dioxide (CO2)? Or, to put it another way, is catastrophic anthropogenic (man-made) global warming (abbreviated as CAGW) real?

There has been a warming trend for much of the 20th century. In fact, ICR scientist Larry Vardiman did his own independent analysis of three different datasets and concluded that warming had probably occurred for at least the last 30 to 50 years.1

But past warming is no indication that such warming will necessarily continue. In fact, there has been an apparent pause in this warming trend for the last 18 years.2 Nor does a warming trend automatically prove that human activity is responsible.

A recent article in Eos, however, attempted to establish as fact that human activities drive global warming.3 The author, Dr. Shaun Lovejoy, did this by supposedly disproving the only alternative—that observed warming is due to natural causes. He calls those who support this alternative hypothesis “denialists” because they supposedly deny the obvious facts of science. 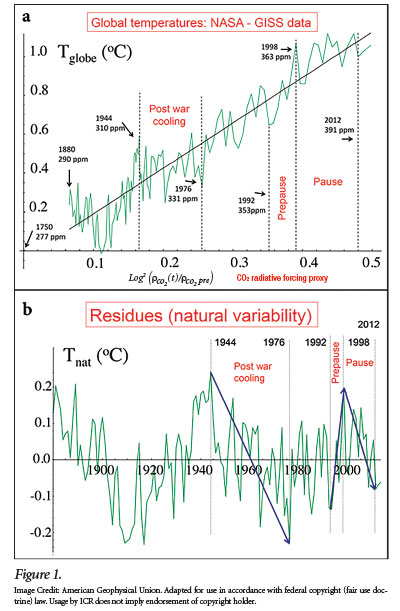 Lovejoy attempts to show that increased amounts of atmospheric carbon dioxide are responsible for an increase in global temperatures of about 1° Celsius over the last 125 years. He does this by making a plot of change in global temperature against a “stand in” or “proxy” for radiative forcing due to atmospheric CO2 (Figure 1).4 Radiative forcing is an indication of a gas’s ability to affect the earth’s climate. (See the sidebar for a more detailed discussion.) Lovejoy argues that there is only a one-in-three-million chance that natural causes could produce this temperature rise, although he later acknowledges that a more realistic estimate is one in a thousand.

But are long-lasting changes in climate really that unlikely? Abundant historical evidence shows that significant, long-term climate fluctuations lasting hundreds of years have taken place. These fluctuations occurred long before human CO2 contributions became significant. Even scientists who believe that humans are causing global warming acknowledge that human contributions to atmospheric CO2 were practically negligible until the early- to mid-1900s.5

Yet there have been two significant changes in climate within the last thousand years—the Medieval Warm Period (roughly 950–1250 A. D.) and the Little Ice Age (roughly 1300–1850 A. D.). Because these changes in climate occurred before humans could have caused them, the mere existence of these two periods is a real problem for any attempt to dismiss the possibility of natural changes in climate. For this reason, some who believe in CAGW have attempted to minimize the significance of these past climate fluctuations, despite abundant historical evidence for their reality.6,7

For instance, one of the best-known images in the global warming debate is the “hockey stick” graph of Penn State University climatologist Michael Mann, so-called because it resembles a hockey stick turned on its side with the blade pointing up. The hockey stick has been used to argue that the late 20th century was characterized by unprecedented warming, since Mann’s statistical analysis significantly “cooled” the Medieval Warm period. However, Mann’s work has been widely criticized, and a more conventional analysis indicates that 20th-century warming is not unprecedented (Figure 2).8

The Medieval Warm Period and the Little Ice Age raise an obvious question about Lovejoy’s reasoning. If not one but two significant long-term changes in climate have occurred within the last thousand years, before humans could have influenced climate to any significant degree, then perhaps such naturally occurring changes in climate are not nearly as unlikely as Lovejoy claims!

Moreover, Lovejoy seems to be underestimating the probability of natural changes in climate. His argument assumes that temperatures from hundreds of years ago can be known accurately to within just one-tenth of a degree Celsius (0.1°C).3 But these temperatures were not measured with thermometers—not even crude thermometers. Rather, they were estimated from things like tree rings, boreholes, ice cores, etc. Because these are indirect estimates of temperatures, the true uncertainty is almost surely a lot more than Lovejoy’s optimistic estimate of 0.1°C. Using the same reasoning he used, but with larger estimates for these temperature uncertainties, would imply that significant natural changes in climate are much more probable than he asserts.9 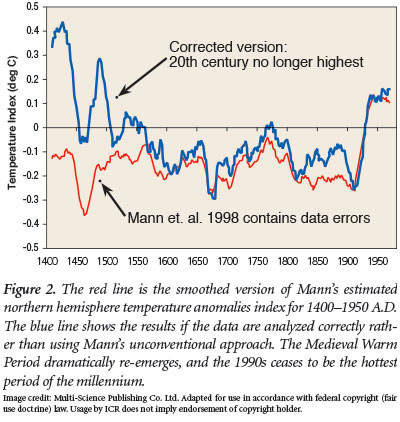 An interesting side note is that many evolutionists absolutely dismiss out of hand the possibility that any observed global warming could be due primarily to natural causes. For instance, the National Center for Science Education has made advocacy of a belief in man-made global warming a priority.10 Yet even by Lovejoy’s own calculations, the lowest probability he can estimate against recent warming being the result of natural causes is one in three million (1 in 3×106). Compare this to a probability of 1 in 1×10106 that the simple protein insulin can form by pure chance.11 Yet evolutionists claim that the insulin protein did somehow form by chance, even though such an event is much less likely (by their own reasoning) than long-term natural climate variation, which many of them confidently dismiss as an impossibility. Why? Could it have something to do with their worldview?

Lovejoy quickly dismisses other factors that can affect climate, such as changes in solar activity. But mounting evidence shows that the sun can indeed subtly influence weather and climate by affecting the number of cosmic rays (energetic protons) entering the atmosphere. In fact, the Ph.D. work of one of this article’s authors found additional evidence for this possibility.12 Also, increases in temperature can actually cause an increase in atmospheric CO2 via releases from the oceans. A well-known rule in chemistry called Henry’s law states that the amount of gas that can be dissolved in a liquid decreases with increasing temperature at constant pressure. This is the reason a can of soda goes flat as it warms. Indeed, some datasets show atmospheric CO2 increasing after temperature goes up.13 So, are temperatures, particularly ocean temperatures, causing an increase in atmospheric CO2, or are warmer temperatures the result of increased atmospheric CO2, or is it some of both?

Another problem with the argument that human-produced carbon dioxide could lead to climate catastrophe is that this argument implicitly assumes that the concentration of atmospheric carbon dioxide in the pre-industrial era was consistently much lower, about 270 parts per million (ppm), than today’s value of about 400 ppm. It also assumes that today’s value is truly abnormal.

Specialists are aware of these data but generally dismiss them in favor of estimates of atmospheric CO2 inferred from ice cores. However, gases tend to escape from the cores after their removal from the surrounding ice, which implies that such estimates will tend to be lower than the true values. Even so, there is evidence from a shallow Antarctic ice core that amounts of CO2 may have been as high as 328 ppm within the last hundred years or so.16 But recent jumps in the amount of atmospheric CO2, both before and during the industrial period, suggest that atmospheric CO2 can vary due to natural causes, not just human influences. We have already mentioned one possible source for such variation—warming oceans, which would release more CO2 into the atmosphere. 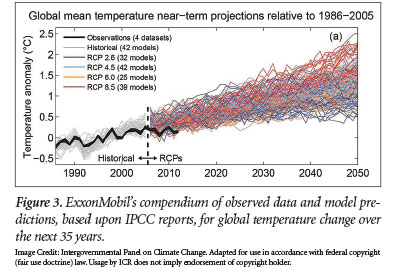 Finally, much of the alarmism surrounding this issue results from climate computer models that predict considerably higher temperatures in the coming decades as a result of increasing atmospheric carbon dioxide. Obviously, the particulars of different models will vary, but a general overview is presented in the sidebar. However, in the past these climate models have consistently overestimated the amount of future warming, as shown in Figure 3.17 If one looks at these climate change model predictions for the temperature anomaly from the present to 2050, they vary from 0 to 2.5°C, a significant disparity between models. The observational data are very near 0 for the temperature anomaly.

Clearly, there are major disagreements between different models about any significant global warming. But the data accumulated thus far seem to support the models (hypotheses) predicting global warming of no more than 0.5°C through 2050.

So many variables affect Earth’s climate that it’s difficult to see how a computer model can accurately predict future changes, especially given our present imperfect understanding. Earth’s atmosphere is subject to numerous intricate interactions, and we still don’t have a firm understanding of its overall long-term sensitivity. If we want a realistic assessment of climate change, we need to 1) do our homework and learn from history, 2) continue to study the data with great diligence, and 3) refrain from jumping to conclusions based on skewed climate models and short-sighted assumptions.

To be sure, God has appointed man to be custodian of His Earth. We should be good stewards of what He has given us, but we enter dangerous territory if we presume to be able to control and shape to our will what God has made. The law of unanticipated consequences inevitably intervenes.