An ape-like lower jaw fossil from Greece and a tooth from Bulgaria now pose a big threat to evolution’s story of mankind’s supposed split from chimpanzees out of Africa 5-7 million years ago. A new report describing the ground around the Graecopithecus jaw and tooth asserts that mankind emerged out of the Mediterranean, not out of Africa, hundreds of thousands of years before the textbook out-of-Africa age range. What would this challenge mean if the team’s age results relied on faulty dating techniques?

The Graecopithecus lower jaw has an ape-like V-shape that contrasts with modern man’s U-shaped jaws. German University of Tübingen News called it “pre-human.”1 But why not just call it an ape, if it is an ape jaw? Instead, the fossil research team noticed that its tooth roots curve inward within the jaw, like human roots. Today’s great ape tooth roots bend outward. The team interpreted this to mean that the extinct ape was evolving human-like teeth. 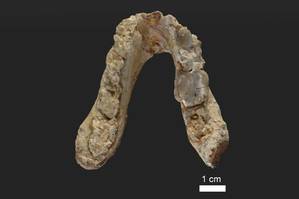 However, extinct Australopiths and other full-on apes also had tooth roots that bent inward, not outward. Thus, the direction of tooth root divergence is no more diagnostic of humans versus apes than, say, eyelash curvature.

The team of mostly German, Bulgarian, and Greek scientists described the methods they used to assign ages to the Graecopithecus jaw in the online journal PLOS ONE.2 And those methods appear to carry plenty of bias.

They generated a “magnetostratigraphic record” consisting of 118 samples.2 Each one had minerals that oriented themselves according to Earth’s magnetic field at the time they were deposited. But how do they know when? They had to assign ages to Earth’s magnetic reversals. But nobody knows, and nobody could go back in time to measure how long Earth’s magnetic poles maintained one orientation before reversing direction. The poles could have flipped much faster back then. 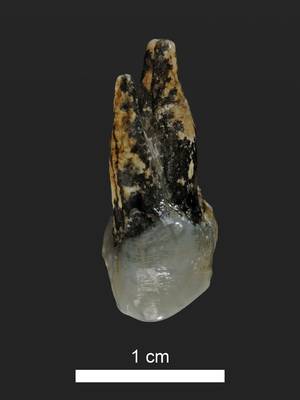 Often, researchers will transfer age assignments from a published geologic chart to local field observations. This process usually requires the local sediment record to be selectively stretched or shrunk to fit the textbook’s timescale. But should scientists trust the ages printed on the chart?3

The chart includes a bio-magnetostratigraphic timeline.2 One reason to distrust it is that the “bio” part of that word means that the chart already assumes that living things now preserved as fossils evolved over millions of years.

Another reason to distrust the chart requires a bit of background explanation. The ages on the chart tie back to Ar-Ar (argon-argon) radioisotope dates. Then age-dating specialists linked those Ar-Ar-dated sediment layers to assumed times for ancient Earth-Sun position shifts. It’s called orbital tuning. But ironically, a separate chapter in the chart’s book documents how orbital tuning depends on radioisotope dating!

Climate physicist Jake Hebert kicked the supports out from beneath the whole enterprise of orbital tuning by pointing out that scientists started to use a different age assignment than the original one used to establish the validity of orbital tuning. Has anyone bothered to see if that new age assignment debunked the method? Dr. Hebert checked. And it did.4,5

Creation geologist Andrew Snelling also described the unhealthy interdependence between Ar-Ar and orbital tuning in Answers Research Journal. He wrote, “In other words, because there is no objective standard the Ar-Ar method is calibrated against itself!”6

The PLOS ONE team based its challenge of the accepted out-of-Africa story on age dates that rely on nothing more than an extravagantly-dressed belief in evolutionary time. Beneath layers of tech talk, we find a dog chasing its tail.7

The team asks whether humans evolved from Africa or the Mediterranean, but jaw and tooth anatomy suggests they should instead ask if humans ever evolved at all. They ask if this supposed evolution happened six and half or nearer seven million years ago, but the circular reasoning that underlies evolutionary ages suggests they should ask if the millions of years ever really occurred.

The Temple's Silent Construction
"And the house, when it was in building, was built of stone made ready before it was brought thither: so that there was neither hammer nor axe nor...
BY: HENRY M. MORRIS, PH.D.

The Days of Yore
"For ask now of the days that are past, which were before thee, since the day that God created man upon the earth, and ask from the one side of heaven...
BY: HENRY M. MORRIS, PH.D.

Biblical Myths?
Throughout the Old Testament, God often reminded His children to remember His mighty acts on their behalf. Sometimes visible memorials were set up to facilitate...
BY: JOHN D. MORRIS, PH.D.
More Creation Q&A

NEWS
No Microbes on Mars
Mars is a lifeless world. But those holding to a naturalistic worldview continue to have hope—even faith—that the Red Planet was at...
BY: FRANK SHERWIN, D.SC. (HON.)
Shop Related Products
$