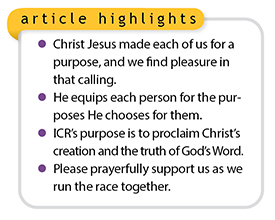 Eric Liddell was one of the most famous athletes of the 20th century and perhaps the greatest that Scotland ever produced. An international rugby player, Olympic champion, and world-record-holding sprinter, the “Flying Scotsman” was also a man of deep Christian faith and conviction—a story captured so beautifully in the 1981 Oscar-winning film Chariots of Fire.

During the 1924 Olympics, Liddell made international headlines when he withdrew from the 100-meter race—his best event—because the qualifying heats were held on Sunday. He suffered much ridicule at the time but refused to compromise his conviction to honor God. Unknown to most, Liddell had set his sights on full-time ministry in China. But his desire to compete was also strong, a position he explained to his sister in a pivotal scene in the film: “Jenny, you’ve got to understand. I believe God made me for a purpose—for China. But He also made me fast! And when I run, I feel His pleasure. To give it up would be to hold Him in contempt.”

Liddell would later compete in the 400-meter race—an event in which he was not favored—and surprised the world by winning Olympic gold. Overnight he became the most famous man in the British Empire and the world of athletics, and his testimony and fame greatly aided his missionary work in China. Without question, Eric Liddell was a born athlete. God made him fast, but God also used his speed for a far greater purpose.

The Old Testament prophet Jeremiah was also born for a purpose. “Before I formed you in the womb I knew you; before you were born I sanctified you; I ordained you a prophet to the nations” (Jeremiah 1:5). But unlike the Flying Scotsman, Jeremiah won no races, no gold medals, and he never experienced the glory and adulation of fame. Instead, tears of anguish dampened his cheeks as the “weeping prophet” spent decades calling God’s people to repentance. Jeremiah suffered great persecution and ridicule throughout his ministry (e.g., Jeremiah 20:1-7), but his sense of divine purpose drove him to fulfill God’s calling, and he felt God’s pleasure when doing what he was born to do. Even in the darkest days of apostasy, he could rest in the assurance that God’s “compassions fail not” for “the LORD is my portion…therefore I hope in Him!” (Lamentations 3:22-24).

There’s a saying in sports that “you can’t teach speed.” You can coach a man to run faster, but you can’t improve on what isn’t already there. Such is the case with Liddell and Jeremiah. We’d never expect God to call a man to be an Olympic sprint champion without outfitting him first with speed, nor would God call a man to be a prophet without equipping him for the task. God not only gave Jeremiah the words to speak, but He also strengthened his resolve, promising to protect and deliver him from the fight to come (Jeremiah 1:7-10, 18-19). And armed with these assurances, Jeremiah faced his foes and ran the race God called him to run.

Few are born to be athletic champions. Fewer still are born to be prophets of national repentance. But we were all born to be something. And believers especially must be sensitive to God’s purpose for their lives. ICR was born to study and proclaim the veracity of God’s Word—from Genesis to Revelation—and to disciple God’s people and strengthen their walk and witness for Him. God has equipped ICR for this purpose. We invite like-minded believers to join us. Feel His pleasure as we run the race until Christ returns.