An American research team recently reanalyzed a strange fossil the Works Progress Administration excavated in 1940 from the Triassic Otis Chalk in west Texas.1 This partial skull showed that the animal had a huge, thick dome on its head, much like pachycephalosaurs found in Cretaceous deposits. According to conventional consensus, 100 million years and a vicious extinction event separate the two fossil types. What role did an evolutionary perspective play in this team's conclusions about this supposedly out-of-place dome-headed fossil?

The skull goes by the genus name Triopticus and bears a strange pit in its middle. Its new description appears in the journal Current Biology, along with an interpretation of what must have happened to produce two very similar reptiles so distantly separated in evolutionary time.2

The study authors described specific features Triopticus had in common with pachycephalosaurs: 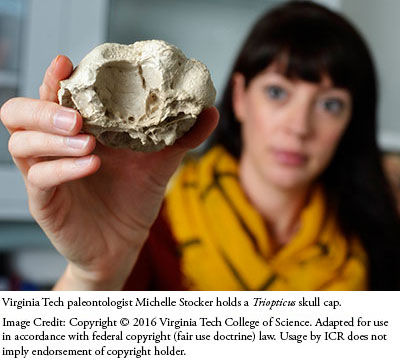 The team cautioned that the two are "not identical." Some common-looking features could reflect mineral deposits on the skull long after it was buried. Also, Triopticus had peculiar holes in its skull near its eyes that it shares with a large group of crocodile-styled animals whose remains landed in typically Triassic sediments.

Maybe Triopticus looked like some kind of dome-headed crocodilian. Nobody will know without more complete specimens. But Pachycephalosaurus, like Stegoceras found in Cretaceous strata, walked on two legs.

Meanwhile, the mystery of like-forms reappearing in later layers extends beyond just this fossil pair. The study authors surveyed body plan similarities between all sorts of reptiles from the Triassic versus the post-Triassic layers (Jurassic and Cretaceous). They analyzed skull dimensions, body skeleton features, tooth types, and basic interpretations like two-legged versus four-legged walking. They discovered that most body types actually overlapped between the different layers! They wrote,

Many of these recurring morphologies [shapes] are found in post-Triassic ornithodirans, such as sauropodomorphs, ornithomimosaurs, and spinosaurid dinosaurs, but especially within Ornithischia, including thyreophorans (e.g., Scutellosaurus, ankylosaurs) and, as we demonstrate here, between Triopticus and Cretaceous pachycephalosaurs.

How could a supposed end-Triassic extinction event wipe out one set of animals only for another set to suddenly reappear in similar or the same basic forms? The study authors asserted that these creatures somehow "re-evolved."2

So, dozens of animals evolved the same shapes twice—both times from just a few "stem" reptiles. What are the odds of that?

Other authors had also suggested that certain species evolved more than once, including crinoids and certain fish.

All these speculations ignore the Genesis Flood. If all these sedimentary rock layers represent Flood deposits, then millions of years did not separate them. Instead, perhaps mere months or just hours elapsed between each deposit. The deposits could represent different environments or elevations, not time periods.

The Flood scenario also solves the mystery of why fossils occur at all, since normal, low-energy river processes don't make fossils today, but abnormally-high-energy Flood processes could have. It also erases the need to imagine the same animal forms evolving multiple times.

God could have created different creatures with very similar outward appearances, like marsupial moles versus traditional moles, bandicoots versus rats, or possibly ceratopsians versus rhinoceroses. So those who speculate that certain animal forms re-evolved didn't necessarily get that idea from the fossils or the rocks. They got that idea from assuming evolution and its required millions of years.