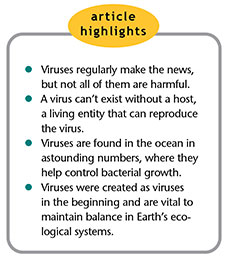 A virus is a very tiny structure that, in its simplest definition, is some nucleic acid (either DNA or RNA) packed inside a protein coat. Viruses can’t live on their own—they are designed to replicate inside living cells.

Not all viruses are bad. The disease-causing ones such as COVID-19 get all the news coverage. Creation scientists believe viruses were created in the beginning and that many underwent mutations, such as the more common flu viruses, after the Curse.

Viruses are found virtually everywhere, especially in the world’s oceans where their numbers are astounding. In just a few drops of surface seawater there can be as many as 10 to 100 million of them per milliliter.1 Marine microorganisms, including viruses, make up about 70% of the oceanic biomass, and all those tiny creatures together are called the marine microbiome.2 Biologists estimate marine viruses are in concentrations of approximately three billion per ounce of seawater.

The carbon cycle is a critical part of Earth’s ecosystem and is the largest of all biochemical cycles. The microbial community plays an important part in the marine carbon cycle. It’s an example of God’s design found in complex ecological interactions.

The oceans also have vast numbers of bacteria that are constantly reproducing in prodigious numbers. They would become overwhelming in a relatively short time if it weren’t for specially designed viruses called bacteriophages (or phages). Under a powerful electron microscope, these viruses (called T-even or E. coli phages) look like tiny lunar landers with long spindly legs. Bacteriophages are significantly smaller than these bacteria. The phages are designed to “land” on their host’s surface and inject their genetic material into the bacterial cell when the phage’s “legs” contract. The cellular machinery of the bacterium then starts to produce more phages due to new instructions from the phage. In a short time, the bacterial cell breaks apart (lyses), releasing more T-even phages that then go on to infect other oceanic bacteria. This is called the lytic cycle. In this way, the levels of bacteria are controlled by these important phages, called femtoplankton.

There are also other kinds of microorganisms in the oceans called cyanobacteria (formerly called blue-green algae). This large and diverse group of bacteria contains the pigment chlorophyll and therefore can undergo the complex process of photosynthesis.3 Their vast numbers are controlled by viruses called phycoviruses.

Taken together, we can see the interactions of viruses with their hosts (bacteria, cyanobacteria, and even fish) in the marine ecosystem4 as part of God’s grand design of keeping the oceans and our world balanced and healthy.