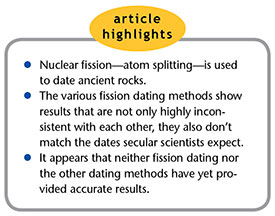 Have you ever pulled apart a large mass of taffy and watched it break into two approximately equal masses? This is an illustration of what happens in the subatomic world when a 238U or 235U atom undergoes splitting, or fission. Nuclear fission is often used to date rocks to millions or billions of years old. But are these methods valid?

The Basics of Nuclear Fission

Spontaneous fission tracks in the mounted zircon sample MT-2 from the RATE study.5

Sometimes a nucleus splits into approximately equal halves (e.g., 110Pd + 110Pd) and sometimes into unequal parts (e.g., 92Kr + 141Ba). In both cases, free neutrons are released. The yield of particular isotope fragments from this process can be approximately predicted using a formula developed by Rudstam1,2 and adapted to a computer program called FREYA by Vogt and Randrup.3 A review of how these methods are used to date rocks can be found online.4

What Do the Data Suggest?

Important questions must be asked about nuclear fission dating methods. Are they reliable? Do they agree with each other? The Institute for Creation Research performed an extensive study on radiometric dating methods called Radioisotopes and the Age of the Earth (RATE). 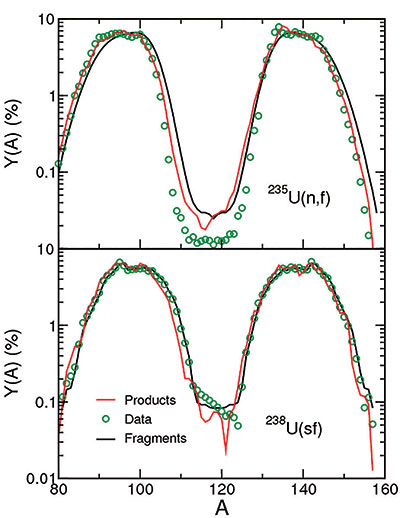 Predictions from the Rudstam formula for approximate production of various isotopes from fission of 235U and 238U compared to actual experimental data. Actual experimental data are shown as hollow green dots. The black curves are the 5-Gaussian fits to the fragment distributions, while the red curves are the results after neutron emission. A is the atomic mass number and Y(A)(%) is the percent yield from each fission reaction for a given isotope with mass number A.3

A full summary of the fission track dating results from RATE can be found on pages 218 and 238 of reference 5, available online. The published ages are taken from various professional journals such as references 6 and 7. Table 1 in this article compares the results of three different dating models based on that data.

This discordance means that the U-Th-Pb and fission track dating methods give wildly different dates for the zircon samples measured, most of which strongly diverge from the secular age expected for the Middle Cambrian rock. Similarly, the fission track dating for the Late Jurassic samples gives results that diverge from the expected geologic age.

Zircon samples from the Early Miocene samples give dates closer to those of conventional geology, but there is still some significant variation. About the only reasonable conclusion that can be drawn from the secular models is that the current dating models give highly differing results for the same zircon sample and, using the central age of the sample groupings,5 there were between 125 and 200 × 106 years of decay, at today’s decay rates, which occurred during the Middle Cambrian and Late Jurassic.

Within the framework of a biblically based model for creation, the data from reference 5 clearly show there must have been a period of accelerated decay sometime in the past, most likely during the Flood year. The decay rate of 238U appears to have gradually increased from the Middle Cambrian through the Late Jurassic and then began to decrease on or before the Early Miocene until it stabilized at the decay rate we observe today. Note how the Early Miocene data show reduced decays as the decay rate may have slowed and stabilized.

In fact, the RATE results seem to suggest an ebb and flow of volcanic activity from the Middle Cambrian through the Late Jurassic systems8 that carried zircon crystals experiencing varied amounts of accelerated nuclear decay to crustal rock during the early and mid-stages of the Flood. A model based on the Genesis Flood better explains these volcanic units if they occurred rapidly one after another during a short time frame while experiencing varying accelerated decay rates and significant mixing of the rock crystals contained therein.

Reviewing results of nuclear fission dating methods yields a simple result: They disagree with both each other and secular expectations on the ages of the geologic column. In addition to the many inherent problems with radiometric dating,9 we can conclude that no dating method so far can yield accurate results. 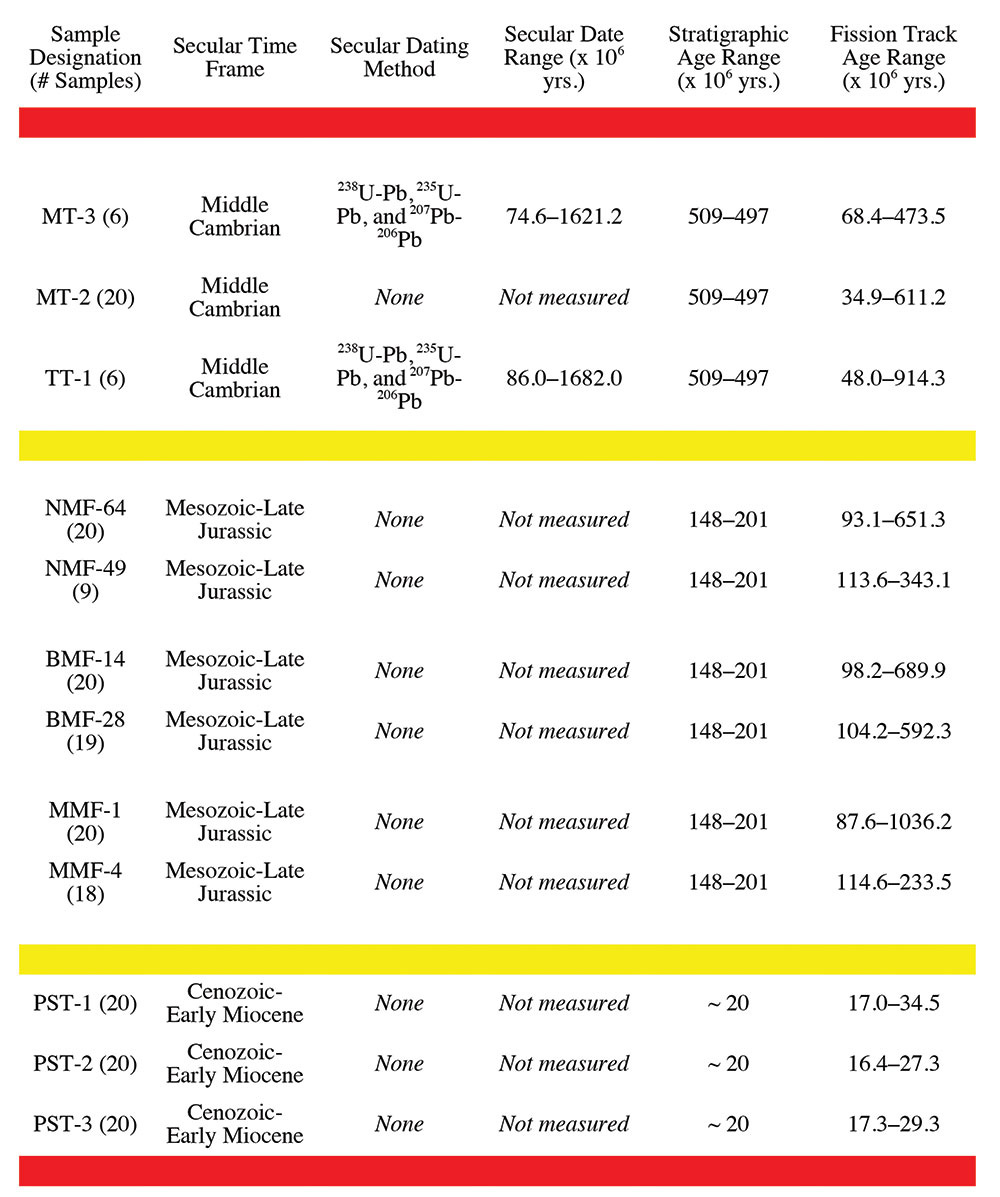