Evidence continues to accumulate that we may have turned the corner on global warming. The earth may be entering a period of cooling. A group of solar physicists in Europe has found a strong association between solar activity and temperatures in central England in weather records as far back as the Maunder Minimum, a 50-year period in which there were no sunspots between about 1650 and 1700 A.D.1 The Little Ice Age in Europe coincided with the Maunder Minimum and has long been thought to have been associated in some way with sunspots.

Recent solar activity has fallen to levels unknown during the previous century. Motivated by recent relatively cold winters in the United Kingdom, the team of solar physicists investigated the possible connection with solar activity. They identified the anomalously cold winters in England by conducting complex statistical studies on the Central England Temperature (CET) records constructed by Manley2 and Parker et al.3 The CET record is the world's longest instrumental record of temperature and extends back to 1659 A.D., at the start of the Maunder Minimum. It is composed of three stations located in London, Bristol, and Lancaster, England. The CET covers a spatial scale in the shape of a triangle on the order of about 190 miles (300 kilometers). This small scale makes it a "regional" climate indicator and to some extent it will reflect changes on both European and northern hemispheric scales.

Solar activity was quantified for the variable FS, called the open solar magnetic flux, based on a comparison of direct measurements of solar radiance and galactic cosmic ray fluxes over the past century. Solar radiance on the earth is modulated by disturbances in the cosmic magnetic field surrounding the earth. Sunspots (dark, relatively cool spots on the surface of the sun) are a reflection of changing solar activity. The long record of sunspot numbers was used to calculate FS prior to about 1900 A.D.

Figure 1 compares the long-period trend of FS constructed by Vieira and Solanki4 with the same period of the estimated mean northern hemispheric temperature anomaly, ΔTN, constructed by Mann et al5 and the detrended winter CET, δTDJF, constructed by Lockwood et al1 and Parker et al.3 Note that FS in Figure 1 (a) is zero in 1650 A.D. for a period of about 50 years, during which time the estimated northern hemispheric temperature, ΔTN, is about 0.25oC below the long-term mean and the estimated CET anomaly, δTDJF, averages a relative low temperature of about 3oC. This was during the Little Ice Age in Europe. From about 1700 A.D., FS rose to the highest solar activity on record. Just prior to 2000 A.D., it appears to have begun a significant decline. ΔTN also appears to have reached a maximum just after 2000 A.D. and is now on the decline. δTDJF appears to have begun a decline in the late 1990s and is declining even more steeply. There are various lag times involved in cosmic and atmospheric processes, so it's not surprising that the changes in these variables aren't aligned exactly. But it seems clear from this data that the level of solar activity has a direct correlation with temperatures both in the northern hemisphere in general and in central England in particular. 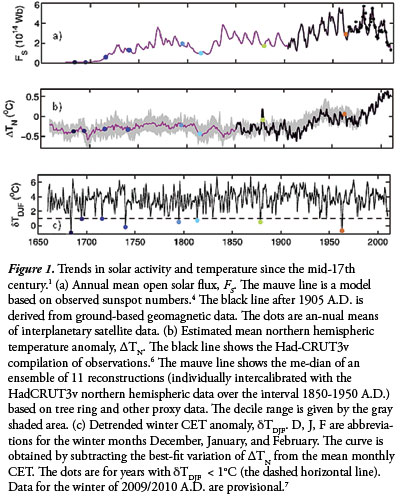 In their interpretation of the results, Lockwood et al1 leave the door open to an interaction between solar activity and clouds and, thereby, changes in surface heating in accordance with galactic cosmic radiation changes as suggested by Svensmark.8 However, they appear to prefer an interpretation that solar activity is more likely to cause changes in upper atmospheric airflow patterns. They suggest that such effects might cause weather patterns to be blocked over the Atlantic, leading to climate changes in Europe. However, they offer little support for this view. Why would changes in solar activity interact with jet stream dynamics? They don't even hint at a possible physical mechanism. If they were serious about this suggestion, they would at least offer a potential process by which surface temperatures can change. Examples of possible mechanisms might be: 1) upper atmospheric pressure and wind could change due to fluctuations in the radiation balance, or 2) jet stream winds could change due to charged cloud particle interactions with electromagnetic fields.

Another difficulty I have with their preference for solar-driven upper atmospheric flow patterns is that it diminishes the evidence for early signs of global cooling in regions beyond England. If the changes in solar activity are global, I would expect global consequences. Yet, they are careful to restrict their application of their data to England, possibly Europe, but probably not to the entire globe. This caution is appropriate because of the small scale of the CET record. However, the likely global nature of the solar activity revealed by the open magnetic flux variable, FS, would tend to argue for a global effect on surface temperature.

Lockwood et al have provided new evidence that global warming may have peaked and has begun to wane. However, until they offer a better model for how solar activity interacts with earth's atmosphere and changes surface temperatures, I prefer Svensmark's explanation of less cloud formation when the sun is active and more solar radiation is available to heat the earth. In any regard, not only does the evidence contradict the current political and scientific trend of blaming man-made emissions for global warming--it appears that long-term global warming may not even be occurring at all.9