If by definition something can never come from nothing, how could anything exist unless Someone put it there? This question has been used as a classic argument for the existence of God—an argument that theoretical physicist Lawrence Krauss tries to tackle in his new book, A Universe from Nothing. Although the book's counterarguments were designed to close the door on God, they actually distill to failed atheist tactics. 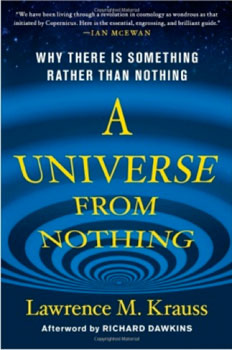 Krauss, fully convinced of the Big Bang, asserted that recent scientific discoveries show that something actually can come from nothing, and that the universe and all its laws did come from nothing. He wrote:

Everyone (with the exception of certain school boards in the United States) now knows that the universe is not static but is expanding and that the expansion began in an incredibly hot, dense Big Bang approximately 13.72 billion years ago.1

"There is a valuable lesson here," he continued. "As [Belgian priest and astronomer Georges] Lemaitre recognized, whether or not the Big Bang really happened is a scientific question, not a theological one."1 This lesson certainly is important, but not because it is true—it is, in fact, exactly wrong. Its importance lies in the author's misuse of it to promote faith in God's non-existence.

In this bait-and-switch tactic, Krauss tried to covertly transpose the question of ultimate origins from the realms of theology and philosophy to the realm of science. This way, he can claim authority on the matter and then dictate its terms.

But strict science tests that which is repeatable, and history is not repeatable. Science did not write the Big Bang story. That required immense imagination and deliberately ignoring a wide range of scientific observations that contradict the Big Bang, such as the universe's clumpy mass distribution and galaxies that appear to be billions of years more mature than the model predicts.2,3,4

Krauss cited Edwin Hubble's now famous scientific observation of redshifted starlight, which is a repeatable observation and is therefore science. But to interpret this as being caused by expansion is not directly scientific. And to extrapolate an expanding universe backward in time all the way to when everything supposedly burst forth from nothing is philosophically motivated history, not science at all!

Whether intentional or not, Krauss baited the reader by rightly ascribing astronomical observations to science, and then in the same breath switched to ascribing historical speculation to science.

Nothing is supposed to mean just that—"no thing," which involves the complete absence of any matter or force or space. So, the only way that a universe could come from nothing is if "nothing" is redefined. Krauss unashamedly did just this. According to the Arizona State University news release announcing his new book, "nothingness is unstable….nothing doesn't mean 'nothing' anymore."5 Of course, only "something" can become unstable, not "nothing."

History is not primarily the domain of science. And bait-and-switch definitions such as Krauss' are not science, either. They are philosophy—bad philosophy at best, and evil at worst.