In August 2013 while on a week-long boat tour of Grand Canyon’s Colorado River, I got a close-up view of secular geology’s missing-talus problem. As our crew boarded the boats at Lee’s Ferry, our geologist guide Dr. Steve Austin explained how missing talus challenges the millions-of-years version of Earth history. Everyday weathering processes weaken the cliff face within view of Lee’s Ferry until the cliffs’ rocks tumble down. But only a handful of boulders lie on the canyon floor—not enough if millions of years of erosion have taken place. Since my visit there, I have seen more examples of the missing-talus mystery.

The rocks that a given cliff face sheds form an angled rock pile called a talus slope. The angle of these slopes—called the angle of repose—depends on the size of the talus material. For example, rocks one foot in diameter form a 35-degree slope.1 Unless a historic flood carries away a talus slope, it would eventually reach the very top of the cliff face. 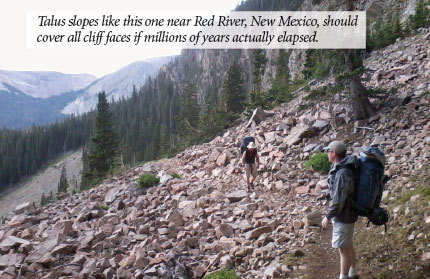 Several processes incessantly erode cliffs. Water reaches tiny crevices and separates blocks of rock when it freezes. Tree roots can forge gaps, and percolating groundwater facilitates chemical reactions that can weaken native rocks. In some places, wind and water erosion of weaker rocks like shale will undercut more resistant rocks layered above them. Geologists recently discovered that billion-volt lightning strikes blast new crevices into solid rock, accelerating their erosion. But against this backdrop of steady cliff decline, earthquakes do the most damage. One earthquake can destroy in a few moments what normal processes erode over many years.

As we rafted down Grand Canyon, we saw recent rock falls, where newly exposed cliff faces gleamed brightly in the scorching sunlight against the darker patina of the older rock. A few years earlier I visited Mount Rushmore, where I learned just how rapidly normal cliff-face erosion occurs. Park signs explained that every year workers rappel down the cliff face to inject glue into newly formed cracks. Otherwise, erosion would soon wreak havoc on the presidential faces. Signs on hiking trails and mountain roads warn of the dangers of ongoing rock falls.

After a million years of wind, water, erosion, lightning, and earthquakes, shouldn’t talus slopes completely cover cliff faces all over the world? At the very least, we should see enormous talus slopes where in most places we see only tiny ones.

Dr. Austin’s Grand Canyon: Monument to Catastrophe describes an image of the cliff near Lee’s Ferry that doesn’t show enough talus to match the cliff’s assigned evolutionary age. A caption beneath the picture says, “If the sandstone cliff had a history of slow and continuous erosion, a much more significant quantity of boulders would be expected at the foot of the slope.”2 Scoffers who pay no serious attention to arguments from creation resources—no matter the quality of evidence—can instead review how secular geologists try to explain the mystery of missing talus.

A textbook titled Tectonic Geomorphology describes the alleged evolutionary origins of Earth’s landforms. Regarding talus slopes, the authors write, “Rapid failure of the scarp [cliff face] by slumping and talus formation leads to angle of repose slopes within a matter of decades to centuries—times much shorter than the presumed ages of the scarps.”3 Slumping refers to a land mass that follows a bowl-like curve as it slides down and away from its former high spot. How did these authors try to solve their timing discrepancy? They asserted that talus angles of repose “violate the linear diffusion process rule in the early stages of topographic evolution.”4 Did rocks long ago really pile up according to a different “diffusion process” than that observed today?

There’s a simpler solution. Maybe the world’s talus slopes are so skimpy because they reflect only thousands, not millions, of years’ worth of erosion and talus formation. At least this scenario does not involve violating the basic physics of falling rocks. 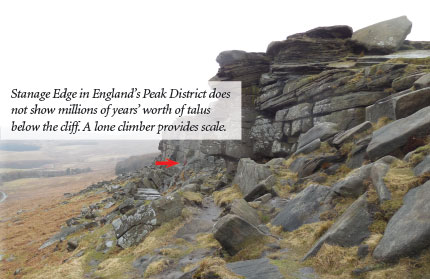 If asked why cliff faces around the world look freshly exposed, a secular geologist might reply—like the authors above—that talus slope angles in the past somehow formed differently than they do today. But what experimental measurements support this odd explanation? It’s just reasoning in a circle: Because talus debris at today’s angles of repose do not cover cliff faces that have supposedly been exposed for eons, ancient talus debris must have fallen into shallower angles than they do today. Well, of course cliffs would be eons old if we assume their faces have been exposed for eons, but what about a reasonable explanation for the missing talus?

Dr. Austin’s talus lesson in Grand Canyon helped me make sense of cliff faces and their talus slopes wherever I see them. It also supplied a new question I can ask that may lead to a conversation about how observations in the real world confirm the Bible. And if the Bible got its history right concerning how Noah’s Flood left layers and gorges around the globe just thousands of years ago, then we have yet another reason to trust whatever else the Bible says.5