Molecular Equidistance: The Echo of Discontinuity? | The Institute for Creation Research
Skip to main content

The ICR life sciences research team is using sequence alignments to re-examine published molecular data and look for evidence of discontinuity.1 One of our preliminary findings has fascinating implications for the biblical model of origins. 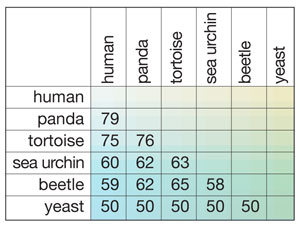 A previous article displayed a table of numbers containing the hypothetical results of a sequence alignment of gene sequences from a variety of creatures.2 Below are the actual results of aligning and comparing the protein sequences (proteins are the products of genes) of the cytochrome b gene (a gene involved in intracellular energy use) from six different species.

The number in each of the boxes represents the percent identity between the molecular sequences of the two species compared. These data are similar to those for another gene involved in intracellular energy use, cytochrome c, as discussed by Michael Denton in 1985 in his seminal critique of evolution.3

What do these results imply about the origins of these molecules? Evolutionists hail the ordered, hierarchical pattern of human-to-other-species comparisons (depicted in the leftmost column of the table) as a fulfillment of the predictions of the evolutionary tree of life.4 However, as Michael Denton observed,3 and which we also observe, the rows of data depict something entirely different. As demonstrated by the comparisons of yeast to every other creature in the table (depicted in the bottommost row), the yeast cytochrome b cannot be arranged in any sort of hierarchy with the other creatures; yeast is equidistant from all other creatures. Hence, it appears that yeast cytochrome b is isolated, separate, and completely distinct from all other species in the table—it is as close to beetles as it is to humans! In a sense, yeast appears discontinuous from the other creatures in the table. This is consistent with the predictions of Genesis 1.

These results raise a whole host of research questions:

The above data raise one final question that is particularly relevant to this month’s celebration of the 50th anniversary of the publication of The Genesis Flood: Which molecular differences among creatures are due to the original genetic boundaries of created kinds, and which differences are due to diversification within created kinds following the creation and (for creatures aboard the Ark) following the Flood? Clearly, the Flood has implications not only for geology, but also for biology. The central thesis of The Genesis Flood—that the Flood is one of the critical issues in origins science—is no less relevant now than it was in 1961.

We are actively pursuing the answers to these questions and are excited about what these studies may reveal.