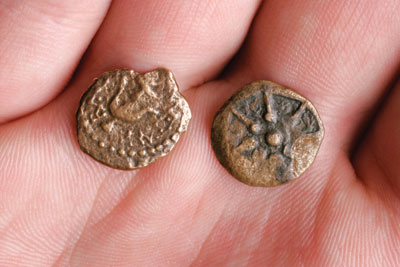 Many cultures value the practice of charitable giving. The Internet especially is full of websites devoted to various ways of giving to charity, the majority of which devote much of their text to "big" donations through estates, trusts, endowments, etc. But that's the way the world thinks--bigger is always better. Big money makes larger programs possible, which require bigger budgets to support, which in turn demand even more money to sustain. It can lead to a self-destructive cycle that shifts the focus towards meeting budgetary goals and away from the purpose for which the charity or ministry was established in the first place.

At ICR we strive mightily to avoid letting that happen by remaining true to God's Word so that He--and only He--is glorified in the end. While large donations are certainly welcome additions to our ministry, we know that large gifts are not possible for most people who feel led to partner with us. And in fact, gifts of any size can be unbiblical if given in the wrong spirit. Consider the words of our Creator in Mark 12:41-44:

And Jesus sat over against the treasury, and beheld how the people cast money into the treasury: and many that were rich cast in much. And there came a certain poor widow, and she threw in two mites, which make a farthing. And he called unto him his disciples, and saith unto them, Verily I say unto you, That this poor widow hath cast more in, than all they which have cast into the treasury: For all they did cast in of their abundance; but she of her want did cast in all that she had, even all her living.

Notice our Lord's commendation of the widow's seemingly small gift. He was not impressed with the large donations of the rich, for they "did cast in of their abundance" and had plenty left over to maintain their lavish lifestyles. Rather, Christ was pleased enough with the widow's "farthing" (one fourth of a penny in the old English monetary system) to call His disciples over to point out this truth: God measures a gift not by its size, but by the motive for which it is given and the sacrifice it represents. Truly, the widow's two mites accounted for more than all the other gifts combined, for in her poverty she gave "all that she had, even all her living."

Perhaps some people have been reluctant to give a small gift, rationalizing that it could do little to further the Lord's work. And yet the example set by this widow clearly shows that God is not interested in the size of a donation, but in its motivation and its proportion to the "treasure" in the giver's life (Matthew 6:21). As such, consider the following: if only 10 percent of those who are currently receiving our material and are not yet partners with us gave $10 per month, the Lord would use them to add over one million dollars by the end of 2008. Many "mites" add up, and can become mighty for our Lord's work!

Please know that ICR prayerfully and carefully applies the resources provided by the Lord to further His ministry. We could not function without the help of many who, like us, wish to share the wonders of His majestic creation so that many can come to a saving knowledge of Him. We encourage you to give wisely. Consider the needs of your family, consider the needs of your home church. And as you make your plans, will you prayerfully consider whether our Lord would have you join us? Your help will make a difference!