When ICR's Radioisotopes and the Age of the Earth (RATE) study ended in 2005, several projects had not been completed. Among these were studies on meteorites, additional carbon-14 work on diamonds, and expanded sampling of helium in zircons. After a few years' delay, we have begun to follow up on these remaining projects. 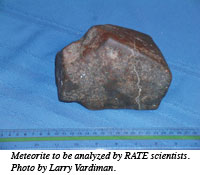 In spring 2008, the 7-pound chondritic meteorite shown in the accompanying picture was purchased for meteorite studies. The meteorite was found in the Sahara Desert in 1998 and sold by a commercial Paris vendor to ICR for our analysis. Dr. Andrew Snelling is the principal investigator (PI) for the meteorite project and plans first to obtain mineralogical analyses and make a thin section that he can examine through a microscope to determine the types and relative amounts of the different minerals it contains. He then plans to send most of the remaining portion to various commercial laboratories to measure isotope ratios in several of the minerals.

Our hope is that the results of these laboratory analyses will indicate that the different minerals comprising the meteorite contain ratios of radioactive parent and daughter elements that are sufficiently different from one another that isochron studies can be done like those previously completed on basalts, granites, and other rocks in the RATE program. We desire to determine whether similar accelerated nuclear decay processes have occurred in meteorites in space as have been demonstrated to occur in minerals on earth. Because the conventional 4.5-billion-year age of the earth is based on isotopic studies on meteorites, it is important that this study be completed to complement what was previously found in RATE.

Also in spring 2008, Dr. John Baumgardner, PI for the carbon-14 project, began working with a second laboratory to continue the study of carbon-14 in diamonds. The technique of analyzing diamonds for carbon-14 has improved with a new process of inserting small portions of diamonds directly into the Accelerator Mass Spectrometer instead of first grinding them into tiny chips and combusting them. The new process reduces the possibility of contamination and provides more confidence in the measured levels of carbon-14. ICR has purchased additional diamonds for these new analyses. Dr. Baumgardner hopes to gain deeper insight into the means by which the carbon-14 with its very short half-life came to exist inside the diamonds.

The search for additional deep cores in granite from which zircons can be extracted for helium content and diffusion is scheduled to begin in 2009. We hope to find one or two new sites in different locations from which we can obtain samples to replicate the earlier RATE results. We don't anticipate that the results will be different, but believe it is important to demonstrate that our results for the original core from New Mexico will occur in other settings elsewhere in the world.

If you are interested in these research projects but have not yet read the original RATE report, you may wish to obtain a copy of our book Radioisotopes and the Age of the Earth, Vol. II: Results of a young-earth creationist research initiative. It can be ordered through the ICR website at www.icr.org/store, or by calling 800.628.7640.

* Dr. Vardiman is Director of Research.

More Humans Are Stewards with Purpose and Accountability

Oysters and Opportunities
Under ideal circumstances, we can do a lot of good. But when circumstances handicap or restrict our potential—in ways we cannot circumvent—we...
BY: JAMES J. S. JOHNSON, J.D., TH.D.

Biblical Foundations For Stewardship
This portion of Acts & Facts is dedicated to challenging all of us to be faithful as "stewards" (I Corinthians 4:2) of what God has...
BY: HENRY M. MORRIS III, D.MIN.

A Dose of Nature Improves Concentration
Many have experienced the calming effects that a simple stroll in a park can produce, but scientists are discovering that walking in green surroundings...
BY: BRIAN THOMAS, PH.D.
More Impact