Jesus lizards literally run across the surface of ponds in Central and South America. According to evolutionary thinking, all reptiles—snakes, turtles, gavials, dinosaurs, pterosaurs, chameleons, skinks, and Jesus lizards—descended from an unknown original reptilian form. What evidence might demonstrate this? Strings of fossils should clearly connect each basic reptile kind back to that supposed key ancestor. It should have interchangeable or adjustable body features that natural forces could have manipulated without disrupting the evolving creature's essential functions. A newly discovered fossil of a Jesus lizard in Wyoming shows just the opposite evidence.

Jack Conrad, a resident research associate of vertebrate paleontology at New York City's American Museum of Natural History described the fossil (found in 2008) in the online journal PloS ONE.1 He described the skull and gave it a new name, but it looks basically like today's Jesus lizards.

So, where is the string of fossils that clearly connects the Jesus lizard back to an ancestor supposed to be common to all reptiles? The string is nowhere to be found—there are no fossil connections and no primordial reptile ancestor paleontologists can point to. Instead, this fossil looks like its living lizard counterpart.

Does the absence for fossil evidence of Jesus lizard evolution disprove all of evolutionary thinking? No, but it falls right in line with biblical creation. If God made a certain kind of lizard with all the parts needed for it to scamper across a watery surface in the beginning, then we would expect to see either that created kind or a different created kind—just what this and other fossils show.

Again, this absence of evolution does not disprove the whole caboodle, but it does cast a vote in favor of the idea that God created this creature in the beginning to reproduce according to its kind. 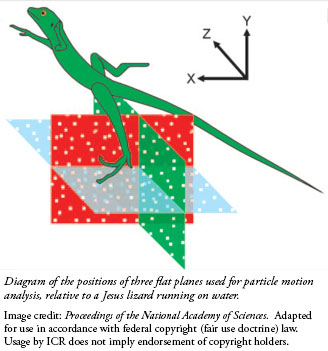 Are the body features of this lizard evolvable? Researchers in 2004 investigated the anatomy and physiology that enables this slender, roughly two-foot long reptile to scamper on water, publishing their results in the Proceedings of the National Academy of Sciences.3

The hindlimb no longer functions like a spring but instead acts more like a piston, limited to only generating force during a step. The slap phase of a step is critical for generating sufficient vertical force to balance the basilisk's body weight, whereas both slap and stroke phases are important for generating fore–aft force.3

Their hind legs also slide away from the body's center during each step. This keeps the lizard from sinking much like the way forward motion keeps a bicycler from toppling. Its long toes provide just enough surface area. In short, it has every trait and habit required to tread water, including a lightweight body and complicated muscle coordination.

Why has nobody even proposed a step-by-step scenario by which these traits and habits could have evolved by any purely natural means? Even if they did, this type of imaginative evolutionary storytelling would be a poor substitute for science.

That science shows no hint of the adjustable or swappable Jesus-lizard body parts with which evolution could tinker, but instead shows a fully integrated suite of water-walking features. Did God simply make it this way from the beginning? The absence of evidence for evolution confirms the recent creation of Jesus lizards.

Image credit: Copyright © 2013 Animal Blog for Kids. Adapted for use in accordance with federal copyright (fair use doctrine) law. Usage by ICR does not imply endorsement of copyright holder.