"Dr. Clarey rocks!…[He] makes the subject easy to understand, shows a great knowledge, and is an overall amazing professor!” The sentiments expressed by this former student at Delta College in Michigan, where Dr. Timothy Clarey taught geology for 17 years, are echoed by other students. Dr. Clarey knew how to communicate sometimes difficult material to his college students. 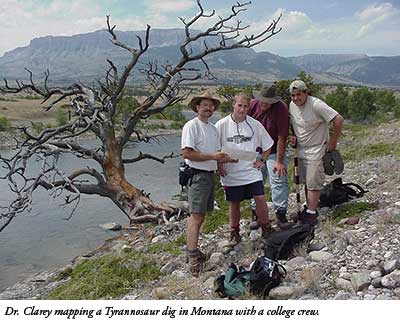 Like the rest of ICR’s scientists, Dr. Clarey’s credentials are extensive. He received his Ph.D. in geology and hydrogeology from Western Michigan University in 1996 and has two master’s degrees in the geosciences. From 1984 to 1992, he worked for Chevron U.S.A., Inc., using seismic data to locate oil and gas prospects. He has published many papers on various aspects of the Rocky Mountains and has authored two college laboratory books. The late Dr. Duane Gish was a key influence in Dr. Clarey’s interest in creationism. “I heard Dr. Gish speak while I was an undergrad at [Western Michigan University]. He kept me focused on recent creation while in college. His book Evolution: The Fossils Say NO! was instrumental in maintaining my faith.”

Dr. Clarey’s relationship with ICR began when a portion of his research and publications was funded through ICR’s Flood-Activated Sedimentation and Tectonics (FAST) program. He was the “T” in FAST—tectonics—during four summers of field studies with the team in its efforts to better understand Flood geology. “I had kept in touch with some of the ICR geology staff over the years, but it wasn’t until I became involved with FAST through the encouragement of Steve Austin, who was with ICR at the time, that I first had the opportunity to make a contribution to creation science through research into the tectonic happenings during and after the Flood. As a result, I have or will be publishing several papers through various types of geologic literature. My research was on catastrophic superfaults in Wyoming and across the American West, including Montana, Utah, and even Alaska. We are continuing to look at the data that were collected and hope to have more results in the future.”

He is also a Creation Geology Society member. “It’s a society of geologists who believe God’s Word and a literal interpretation of the six-day creation and Flood of Noah, and I serve as the editor of the fledgling CGS. It was formed about four years ago by a small group of Ph.D. geologists who believe in recent creation.”

Dr. Clarey wants to make an impact in the creation world and tie geology to recent creation. “Geology shows the Bible to be true,” Dr. Clarey states. He plans to do research on “overthrusts and extinction events” and also wants to write a dinosaur book. “I want to begin with a look at the sediments deposited across the country, examine what geologists call the ‘sequences’ of sedimentation, and try and better understand the relationships of the Flood in terms of depositional style and quantity. How extensive were the sediments across the country—and how thick? What types of sediments were being deposited on one side of the country while another type was being deposited elsewhere? These are the types of questions I’ll be examining in my study. And I do hope to use some of my earlier research on dinosaurs to author a book written from a creation viewpoint.”

Asked if he’ll miss the classroom, he responds by saying he’d like to do an occasional online class to keep in touch with the college students who will someday be our leaders.

During the past four decades, ICR has maintained a commitment to solid research and biblical truth, and it continues with our latest scientist. The Institute for Creation Research welcomes Dr. Timothy Clarey!