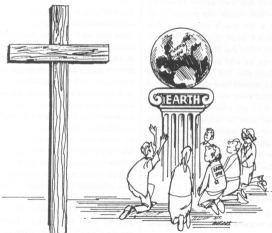 There is a swelling tide that we are reminded of each year with the coming of "Earth Day," and it is a tide that is turning people away from Genesis. School children are taught religiously that it is the earth, not man, who is in grave peril, and that it is only through man’s efforts that the earth is to be "saved."

We now have a Vice President (Al Gore) whose main reason for seeking the executive office was to "save the planet." In recent years we have seen a United Nations "Earth Summit" in which unelected officials from leading countries faced the "crisis" with the passage of a spate of proposed new international laws.

The theme of this winter's Olympic games was a strong environmental one, promoted through the agency of, among other means, religiously "correct" gnomes, elves, and fairies. Everywhere, hope springs eternal that somehow, if only the environment can be made right, man will be made right as well, and world peace and an earthly paradise then will be ours.

Of course, there are dangers here, with at least four tenets of this new agenda that can be identified and contrasted with a Biblical, creationist worldview.

The chief problem with man, according to the new agenda, is separation from his environment, and that man simply cannot be spiritually fulfilled unless this breach is restored. This is the theme throughout Vice President Gore's book, Earth in the Balance: Ecology and the Human Spirit. The Bible, however, as well as history, teaches exactly the opposite. The great crisis is not that man is separated from creation, but that he is separated from his Creator. Until this is rectified, man will only become increasingly alienated from his fellowman, and nature will become increasingly distorted. The whole of creation groans and travails today, not because man has turned his back on nature, but because he has turned his back on God!

The teaching that says man has a special dignity, or is in some way "above" the animals, is viewed today by many environmentalists and "New Age" Educators as utterly repugnant, and as one of the chief causes for the decay in our environment. An unprecedented number of conservative Christians have been elected to public school boards of late, and many have been rudely awakened to find evolution to be not merely an "issue," but at the very core of the humanist agenda that has been accelerating for most of this century. Evolution teaches that man is a mere animal, made in the image of ape, at best. For this reason, many school children are taught that the Native American religions are far nobler than Christianity, for in those beliefs, man is viewed holistically as a part of the natural world from which he evolved. If evolution is true, and then nature is not so much to be cared for as it is to be revered as "sacred," which is what our Vice President espouses. The Biblical teachings that man is separate, being made in God's image, and that man has been commissioned to have dominion over nature are held up for ridicule today. They represent teachings that are increasingly detested.

According to this new agenda, only if the environment is set right can there be any hope that man can live harmoniously with his fellow man and with nature. Yet, the book of James declares that it is because of an internal problem--sin--that man has lusted, destroyed, and warred with his fellowman. One hardly ever will learn today the real lesson from the French Revolution, and, more recently, from the fall of the communist Soviet Union. This lesson is that man cannot be perfected by furnishing the "proper" teaching environment, for man's fundamental flaw is an internal one. On the other hand, a good example of man restored to a proper view of nature can be seen in the works of the great Reformation painters such as Raphael and Rembrandt, who were distinguished from their predecessors by their sensitive and beautiful portrayal of nature, in which real people, real animals, and real landscapes are portrayed. Getting right with God is crucial to a healthy view of the environment, and both the Bible and history teach this.

These hyper-environmentalists claim that because such problems as global warming and ozone depletion pose a clear and imminent threat, it will be only by the most concerted global effort, including the forging of a "new spirituality, that disaster is to be averted. The same military zeal that won the Second World War must be put forth to combat these supposed new enemies. Such environmental groups as the "Sierra Club" and "Greenpeace" are beginning to be supported by both Christians and non-Christians alike, with the same zeal that former generations gave to Christian missions.

There is still a problem, however. One can fully understand the above two issues from a scientific standpoint and come away entirely unconvinced that they represent anything remotely like a "crisis." For example, most people are not aware that there is no consensus yet existing in the scientific community that "global warming" even has been determined to be real, much less to be dangerous. Dozens of top atmospheric scientists and researchers will attest to this uncertainty. One must wonder why our media and government officials are rushing to embrace a "problem" that may not be even real. Could there be some other motive for seeking to forge this "new spirituality"?

The Christian has been commanded by God to show a serious and sober concern for the environment. Ever since the industrial revolution, however, the salt and light that God intended us to be, has been all too easily compromised—first with the "enlightened socialists" of the late 1700s and later with the evolutionists of the late 1800s. These "social Darwinists" blatantly sanctioned greed and the exploitation of nature in the name of "social progress."

Although we should not shrink from accepting our part of the blame for the current state of the environment, we must not be taken in by this emerging new environmental religion. Outwardly, leaders such as Vice President Gore, who professes to be a "Baptist," and who mumbles a sort of allegiance to the Creator, also speaks repeatedly in his book of the "sacredness of nature, with every rock and tree being stamped with "the image of God." He also believes in a wisdom to be distilled from all faiths, laments the loss of the ancient "each godless," and beckons us to heed Teilhard de Chardin's call for "the emergence of a new faith in the future." Although he speaks with an air of authority in the area of science and accepts "Big Bang" cosmology and evolution in his theology, his compassion and sincerity are not to be confused with a true Biblical faith. As it was possible for the Jews of old to fear the Lord, serve their own gods (II Kings 17:33), and thus fall into judgment, so it is today.

If what the Bible says is true, and man really is in a state of rebellion against his Creator (Romans 8:7), then we should not be surprised to see a faith that offers (1) a crusade-like cause to its adherents; (2) a missionary hope for "salvation," and (3) a suppression of the truth that God has created. It is inevitable that this new belief will not tolerate Christians who hold to a creationist worldview, for the Christian maintains that "the builder of the house has more honor than the house." (Hebrews 3:3).

Man is indeed in grave danger today because of his separation--not from nature--but from the GOD who created nature. If the God of creation really does exist, then it is the highest act of treason to "(worship) and (serve) the creature more than the Creator, who is blessed forever. Amen." (Romans 1:25). The only hope for Planet Earth is for man to face the fundamental problem behind the "environmental crisis" and to be reconciled, through the work of Christ, to his Creator. Mr. Gore and those who follow his theology, seriously and soberly need to come back to Genesis.

*William Hoesch has a M.S. degree in geology.