In 2003, the human genome was heralded as a near-complete DNA sequence, except for the repetitive regions that could not be resolved due to the limitations of the prevailing DNA sequencing technologies.1 The chimpanzee genome was subsequently finished in 2005 with the hope that its completion would provide clear-cut DNA similarity evidence for an ape-human common ancestry.2 This similarity is frequently cited as proof of man's evolutionary origins, but a more objective explanation tells a different story, one that is more complex than evolutionary scientists seem willing to admit.

Genomics and the DNA Revolution

One of the main problems with a comparative evolutionary analysis between human and chimp DNA is that some of the most critical DNA sequence is often omitted from the scope of the analysis. Another problem is that only similar DNA sequences are selected for analysis. As a result, estimates of similarity become biased towards the high side. An inflated level of overall DNA sequence similarity between humans and chimps is then reported to the general public, which obviously supports the case for human evolution. Since most people are not equipped to investigate the details of DNA analysis, the data remains unchallenged.

The supposed fact that human DNA is 98 to 99 percent similar to chimpanzee DNA is actually misleading.

The availability of the chimp genome sequence in 2005 has provided a more realistic comparison. It should be noted that the chimp genome was sequenced to a much less stringent level than the human genome, and when completed it initially consisted of a large set of small un-oriented and random fragments. To assemble these DNA fragments into contiguous sections that represented large regions of chromosomes, the human genome was used as a guide or framework to anchor and orient the chimp sequence. Thus, the evolutionary assumption of a supposed ape to human transition was used to assemble the otherwise random chimp genome.

At this point in time, a completely unbiased whole genome comparison between chimp and human has not been done and certainly should be. Despite this fact, several studies have been performed where targeted regions of the genomes were compared and overall similarity estimates as low as 86 percent were obtained.3 Once again, keep in mind that these regions were hand-picked because they already showed similarity at some level. The fact remains that there are large blocks of sequence anomalies between chimp and human that are not directly comparable and would actually give a similarity of 0 percent in some regions. In addition, the loss and addition of large DNA sequence blocks are present in humans and gorillas, but not in chimps and vice versa. This is difficult to explain in evolutionary terms since the gorilla is lower on the primate tree than the chimp and supposedly more distant to humans. How could these large blocks of DNA--from an evolutionary perspective--appear first in gorillas, disappear in chimps, and then reappear in humans?

Analyzing the Source of Similarity

So how exactly did scientists come up with the highly-touted 98 to 99 percent similarity estimates?

First, they used only human and chimp DNA sequence fragments that already exhibited a high level of similarity. Sections that didn't line up were tossed out of the mix. Next, they only used the protein coding portions of genes for their comparison. Most of the DNA sequence across the chromosomal region encompassing a gene is not used for protein coding, but rather for gene regulation, like the instructions in a recipe that specify what to do with the raw ingredients.3 The genetic information that is functional and regulatory is stored in "non-coding regions," which are essential for the proper functioning of all cells, ensuring that the right genes are turned on or off at the right time in concert with other genes. When these regions of the gene are included in a similarity estimate between human and chimp, the values can drop markedly and will vary widely according to the types of genes being compared. 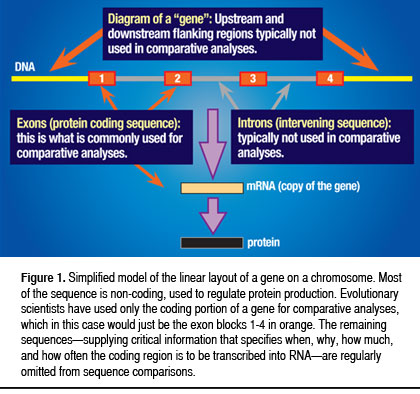 Another important factor concerns the potential for variants of the same protein to have different functions that can perform different tasks in different tissues. There is now no doubt that gene or protein sequence similarities, in and of themselves, are not as significant as other functional and regulatory information in the cell. Unfortunately, evolutionary assumptions drove a biased approach of simple sequence comparisons, providing few answers as to why humans and chimps are obviously so different.

Interestingly, current research is confirming that most of what makes humans biologically unique when compared to chimps and other animals is how genes are controlled and regulated in the genome. Several studies within the past few years are demonstrating clear differences in individual gene and gene network expression patterns between humans and chimps in regard to a wide number of traits.4, 5 Of course, the largest differences are observed in regard to brain function, dexterity, speech, and other traits with strong cognitive components. To make the genetic landscape even more complicated, a number of recent studies are also confirming that close to 93 percent of the genome is transcriptionally active (functional).6 Not so long ago, scientists thought that only 3 to 5 percent of the genome that contained the protein coding regions was functional; the rest was considered "junk DNA."

So what is an appropriate response to the assertion that a 99 percent similarity exists between human and chimp DNA, and thus proves common ancestry?

One can simply say that the whole genomes have never really been compared, only hand-selected regions already known to be similar have been examined, and the data is heavily biased. In fact, due to limitations in DNA sequencing technology, researchers do not even have the complete genomic sequence for human or chimp at present. In the sequence that they do have, much more analysis needs to be done.

Here are a number of key points that counter the evolutionary claims of close human-chimp similarity:

It is clear that the only way to obtain extreme DNA-based similarity between man and chimpanzee is to use comparative analyses that are heavily skewed by an evolutionary bias where one picks and chooses what data or what part of the genome to use. At present, the DNA sequence differences between these genomes clearly indicate a much lower level than 98 to 99 percent. In fact, one evolutionary study suggests it may be as low as 86 percent or less. In addition, the complex functional aspects of genes and their regulatory networks differ markedly between humans and chimps and play a more important role than DNA sequence by itself.

The DNA data, both structural and functional, clearly supports the concept of humans and chimps created as distinct separate kinds. Not only are humans and chimps genetically distinct, but only man has the innate capacity and obligation to worship his Creator.7