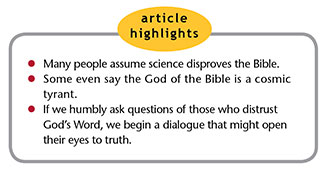 Some contend that science proves the Bible wrong. They may ask how the Bible’s supposedly good God could allow so much pain and evil in the world. And who hasn’t heard that science has proved humans evolved over eons?

Does a Bible believer need a bunch of college degrees to answer these claims? Education helps, but even non-expert Christians can use one basic tactic to address such attacks.

Any Christian can ask thoughtful questions of the challengers. It demonstrates humility, and “God resists the proud, but gives grace to the humble” (James 4:6). It shows interest and care for the questioner. Scripture says, “Let your gentleness be known to all men. The Lord is at hand” (Philippians 4:5), and “I tell you not to resist an evil person. But whoever slaps you on your right cheek, turn the other to him also” (Matthew 5:39). A response from meekness rather than wrath may help the challenger far more than words about their actual subject. After all, “a soft answer turns away wrath, but a harsh word stirs up anger” (Proverb 15:1). Finally, you might learn something from the encounter, and “how much better to get wisdom than gold!” (Proverb 16:16).

This can open a new chat. For example, if they describe God as a cosmic tyrant, then you can ask what Bible verses showed them He is a bad God. You could ask “why would a bad God sacrifice His own Son for sinners like me?” If they describe science as evolution over millions of years, then you might try asking what scientific experiments demonstrate either evolution or millions of years.

The more you know, the more precise the questions you can ask. For example, I have learned that many who accuse God of evil have no logical support for a belief in right and wrong. Those who believe the whole world is made of nothing but atoms think of themselves as walking, talking bags of chemicals. Those who think like this have a hard time trying to explain how atoms can be good or bad. One good question could lead them to see the mismatch. I learned that only lawgivers, not atoms, make laws. God is the ultimate lawgiver. He placed that knowledge of right and wrong both in the Scriptures and in our souls. Ask “how can mere molecules know good or evil?”

Finally, I wouldn’t expect this question tactic to work well online—at least not past the first question. People don’t always act as civilized when facing a screen as when facing a face.

Every generation suffers attacks on the Bible. So, every Christ follower should “sanctify the Lord God in your hearts, and always be ready to give a defense to everyone who asks you a reason for the hope that is in you, with meekness and fear” (1 Peter 3:15). Give your heart to Jesus, then go talk to folks. Ask them about their beliefs. If they challenge the Bible, you can always ask them what they mean or what led them to that conclusion. Your question may become their turning point.