Grand Canyon, with its multi-layered sides, is well known to creationists—years of creationist research and writing have secured its place in Flood geology and creationist literature. The Grand Canyon strata are (mostly) from the Paleozoic “Era,” supposedly from about 550 million to 250 million years ago according to uniformitarian dating. Creationists deny the date, considering the fossil and geologic records as largely due to the great Flood of Noah’s day some few thousand years ago. Paleozoic strata were deposited early in the Flood, while the following Mesozoic “Era” (supposedly 250 to 65 million years ago) and Cenozoic “Era” (from 65 onward) represent middle to late (or post) Flood activity. Grand Canyon doesn’t speak to these, for these strata are not present there, having evidently been eroded away. 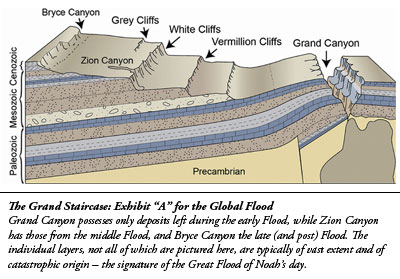 However, when one takes a big picture view of the strata, he sees that the Canyon is only the last notch of a much larger canyon stretching from northern Colorado to southern Arizona. It’s too big to see and can only be appreciated from high above the earth or on maps. The north flank of Grand Canyon is overlain by the Vermillion Cliffs, made up of the Chinle and Kayenta Formations, and the White Cliffs are made up of the cross-bedded Navajo Sandstone. That is overlain by the Grey Cliffs, all of which make up Zion Canyon strata units, which are overlain by the Brian Head and Wasatch Formations, giving Bryce Canyon its unique charm.

Creationists generally attribute Grand Canyon and strata designated as Paleozoic to the beginning phases of the great Flood and ascribe Zion Canyon and strata from the Mesozoic to the middle stages during which the Flood was at its maximum. During the Cenozoic, the waters began to wane. On at least a regional scale, all of the strata deposition required intense, catastrophic forces—the great Flood of Noah’s day!

The accompanying diagram illustrates the successive layers and their vertical relationship.1 Grand Canyon shows the continent-spanning Tapeats Sandstone, deposited during the first burst of the Flood by dynamic water action. The Redwall Limestone, in which billions of two-foot-long nautiloid fossils were discovered by creationists, prove the deposit could not have been due to gradual processes. Likewise, the Coconino Sandstone is an underwater sand ripple deposit, not a series of desert sand dunes. Zion Canyon places the Navajo Sandstone in its proper context among marine deposits with marine fossils, not as a terrestrial deposit. Bryce Canyon can best be considered a failed lake bed full of ponding Flood waters. It all fits inferences gained from biblical information. The Grand Staircase, shown in this figure, could be considered Exhibit A for the Flood model of geology.