This year evolutionists are celebrating Charles Darwin's 200th birthday and the 150th anniversary of the publication of his book The Origin of Species. In preparation for this celebration, last December ICR sent Dr. Steve Austin to the Santa Cruz River Valley in southern Argentina to follow up on Darwin's trip on the Beagle. On board, Darwin read Charles Lyell's new book on uniformitarianism, advocating that today's "uniform" processes had dramatically sculptured the earth over long ages, accomplishing much geologic work.

The Santa Cruz River was the Beagle's first major stop, and thus Darwin's first chance to apply Lyell's ideas. Dr. Austin discovered Darwin had made numerous errors in Argentina as he attempted to interpret the river valley according to uniformity, and mistook major Ice Age flooding for great ages of minor processes.

Darwin's voyage continued, sailing around to the west of South America where the ship encountered the Galapagos Islands, straddling the equator. Here Darwin applied uniformitarianism to living systems, and eventually proposed slow-acting evolution as the source of life's diversity. ICR was certain he was equally as wrong on Galapagos as he was in Argentina, and desired to demonstrate it.

This became a reality when Doug Phillips and Vision Forum asked me to accompany them to the Galapagos during the week of March 9-15. They were shooting a Christian family film about a Christian father teaching his son about creation and the dangers of evolution. The film featured interviews with several experts, including me. The project's leading question was: Is Galapagos a living laboratory for evolution or a showcase for creation? 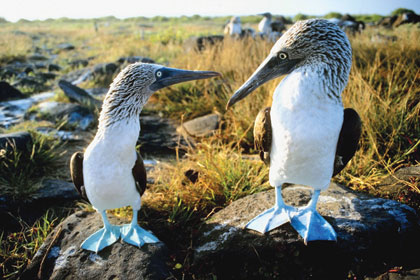 As has been pointed out in these pages, the one thing that Darwin didn't mention in his book The Origin of Species was the origin of species. He discussed at length variety within a species (i.e., pigeons or finches), and merely assumed that these minor, observed changes (microevolution) add up to large changes (macroevolution). This is the unsupported "faith" of the evolutionist. ICR's previous investigations on the Galapagos Islands had convinced us that no evolution is going on there.

The islands abound with unusual life. Going there was a wonderful "animal experience" for all of us, for the animals show little fear of humans. The rather barren volcanic islands afford unencumbered visibility of giant Galapagos turtles, sea lions, land and marine iguanas, Darwin's finches, "booby" birds, flightless cormorants, flamingos, frigate birds, etc., along with sea creatures accessible by snorkeling.

Evolutionists make much of the adaptation of land-based iguanas to ocean life. But is this evolution? No! The two rather different "species" freely interbreed in the wild. Evolution is about the origin of new species from existing species, but here we see the amalgamation of species, the opposite of evolution.

Evolutionists trumpet the several Galapagos finch "species" as arising by adaptation from one species. Creationists agree, but this did not happen through evolution. Normally the finch types segregate by lifestyle according to their beak shape, but in times of stress they interbreed and combine. No evolution here. The flightless cormorants are recognizably related to other species of cormorant on other continents, but these have lost the use of their wings. Since when is the loss of a useful structure an evolutionary development? The real question is how animals acquire wings in the first place, not how they lose them.

No, there is no evolution happening on the Galapagos Islands. They really are a showcase for creation. On display is God's wise creative design in preparing robust gene pools in each created "kind" that enable all of God's creatures to adapt and survive varying conditions.

Darwin got it wrong at the Galapagos Islands. The Genesis account stands.

*Dr. Morris is President of the Institute for Creation Research.