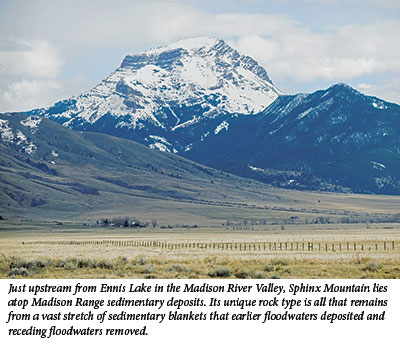 The Bible teaches that God judged every man and air-breathing, land-dwelling animal found across the entire earth’s surface during the Flood. 2 Peter 3:3-7 says that those who scoff at the reality of this worldwide Flood will scoff at God’s coming judgment by fire. If the first did not happen as the Bible says, there’s no reason to trust the second judgment will happen either. But we saw clear evidence of that watery judgment in the mountains around Ennis.

The Madison River’s waters originate in Yellowstone, flow northward through the picturesque Madison River Valley where Ennis lies, then produce rapids on their journey through Bear Trap Canyon. The river eventually merges with other waters near Three Forks, Montana, to form the Missouri River. Oddly, Bear Trap Canyon cuts right through a mountain range made of hard crystalline rock called gneiss. Why didn’t the Madison River flow around the mountain instead of cutting right through it? And did this little river carve the canyon over millions of years? 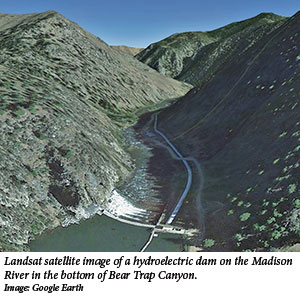 Geologists use the term water gaps for narrow canyons holding rivers that cut through mountain ranges. We don’t see them form today, so we rely on our forensic wits to solve these geologic mysteries. Every continent has water gaps, and thousands exist around the world.1 So, if we solve the mystery of one water gap, we might help solve a world of such mysteries.

Those who declare that slow and gradual erosion is the only process available to answer the water gap question must assert that the river flowed at a pace that eroded through solid gneiss at exactly the same rate as the mountain of gneiss slowly uplifted. This occurs nowhere today and implies an eons-long, finely tuned balance that sounds more like science fiction than science.

Flood geologists have a better explanation that includes water volumes that at one time overtopped the surrounding mountain peaks. As the Rocky Mountains rose late in the Flood year, floodwaters receded off the continents. Decreasing water levels began to pool behind mountainous barriers. They would have rapidly flowed over any nearby low notch soon after the mountaintops appeared above the water’s surface. Like waters that break through a crack in a dam, they ripped through that notch to catastrophically carve a steep-sided gorge. Similar occurrences have been documented during events like the 1982 Mount St. Helens mud flow and the formation of Canyon Lake Gorge.2 But who in their right mind could ever believe in so much water? A second nearby landscape feature made believing as easy as seeing. 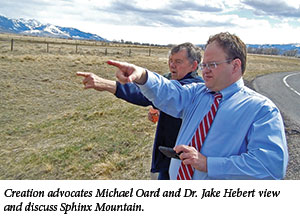 We parked our vehicle beside the road to discuss a very out-of-place peak in the Madison Range called Sphinx Mountain. Its layered sedimentary rocks match no nearby outcrops. Apparently, Sphinx Mountain is all that remains of a vast collection of layered sediments that once blanketed the whole region! Where did all that rock go? The worldwide Flood helps solve the puzzle.

Early flooding mixed dead creatures’ remains with sandstones, limestones, and other sediments as it carried in the sediments that underlie Sphinx Mountain. During perhaps months or weeks, fast flows ripped up debris from far away. Slowing flows deposited more layers on top, then receding waters began to speed up again as they rolled off the world’s continents. They eroded and erased those fresh deposits, carving whole valleys. In the Madison River Valley they eroded all but a tiny remnant of certain layers that today form Sphinx Mountain.3 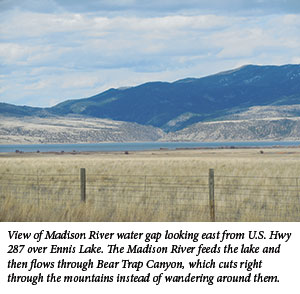 As we gazed at the Madison Range, we imagined early and middle Flood fast flows that formed vast sedimentary sheets where today we see sky. Late Flood rapid erosion removed most of them but left sky-high sedimentary remnants like Sphinx Mountain. Then the last receding waters rapidly carved water gap canyons. Psalm 104 seems to recap the scene:

You who laid the foundations of the earth,
So that it should not be moved forever,
You covered it with the deep as with a garment;
The waters stood above the mountains.
At Your rebuke they fled;
At the voice of Your thunder they hastened away.
They went up over the mountains;
They went down into the valleys,
To the place which You founded for them.
You have set a boundary that they may not pass over,
That they may not return to cover the earth.4

Erosional remnants on mountaintops and water gaps through mountain ranges remind us that the world really was judged by a watery catastrophe that only eight people receiving God’s grace escaped. And since the Bible speaks with amazing accuracy about history and geology, we have plenty of evidence to believe whatever it says about any subject—even about a judgment to come.5