When geologists make field observations, they typically focus on the rock before them and its color, density, mineral makeup, fossil content, and other features. But they often would be well-served by looking at the strata’s context as well.

Numerous examinations of local outcrops can result in large-scale maps and cross-sections. Both small-scale and large-scale studies are necessary, but big-picture consideration of the strata and timing of deposition produces some interesting observations that help to explain both the rock and the conditions under which it was formed. 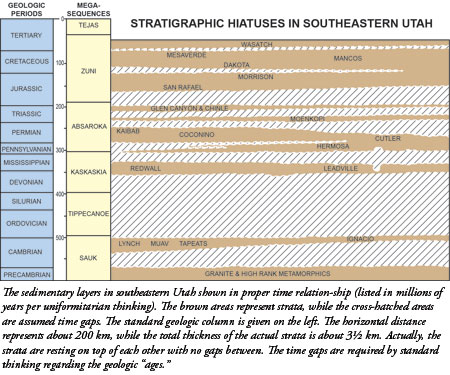 Geologists have found that the layers come in “packages” of strata called megasequences that are bounded on top and bottom by evidence of erosion. The depositional package of sediments overlies a recognizable unconformity or erosional plane and is truncated at the top by another unconformity. Geologists identify at least six megasequences that together comprise essentially all sedimentation. The packages persist across the continents, often ignoring the standard geologic column, yet fitting in with the megasequences. Nearly all sediments were either water-deposited or water-eroded. Could this be the signature of the global Flood?

The accompanying chart illustrates the various layers (brown), the erosional unconformities (wavy lines), and the strata that are assumed to be missing either through erosion or non-deposition (cross-hatched).1 Such charts could be drawn anywhere, but the well-studied and well-represented layers in southern and eastern Utah serve as an illustrative model. Shown are the many pancake-like sedimentary layers in sequence and the erosional gaps between them. The strata are plotted according to the dates (as assigned by standard thinking) of their upper and lower surfaces. The layers actually lie directly on top of each other, but they are drawn separated in time. More of the total geologic column (as proposed by uniformitarianism) is missing than is present.

For evolutionary geologists, the fact that layers are missing is the evidence for erosion. But obvious evidence for erosion is missing as well. Evolutionists assign the “time” between two layers as tens of millions of years, but the contacts are typically flat and featureless. Millions of years of erosion would produce irregular terrain, but there is none—no stream beds, valleys, or canyons.

Road cuts often reveal flat and featureless contacts between strata. Some extend for many miles. The big-picture stratigraphic sections, however, reveal flat time gaps that span the continent, creating doubt about the passage of a long time period and implying dynamic floodwaters.

These types of discussions were never held a generation ago, but expanding geologic knowledge has made regional maps and other data available. No longer should geologists restrict their focus to a single outcrop or hand specimen while ignoring larger implications. No longer should creation/catastrophic thinking be excluded.