Download Evolution Is Not Based on Natural Laws PDF 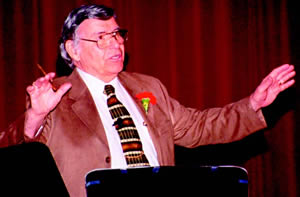 Let us first consider evolutionary theories on the origins of the universe. The most widely accepted theory on the origin of the universe is known technically as inflation theory, but is generally referred to as the Big Bang theory. It was recognized that the standard Big Bang theory had insuperable flaws, so something else had to be postulated to rescue the theory. Alan Guth, now at the Massachusetts Institute of Technology, invented the notion, based on quantum theory, that prior to the Big Bang there occurred a fluctuation of a false vacuum. The particle, or whatever it might be called, that was produced in a tiny fraction of a second, inflated itself into something about the size of a grapefruit. From this point on the remainder of the universe was produced essentially similar to the original Big Bang theory, starting with subatomic particles, then hydrogen (75%) and helium (25%), then stars and galaxies, eventually our solar system, and so on until we arrived. There were no natural laws in existence during this hypothetical early stage of the origin of the universe. Evolutionists must suppose that the natural laws that now govern the operation of the known universe somehow were produced by the Big Bang. Therefore, its origin could not have been based on natural laws. If creation is excluded then likewise all evolutionary theories on the origin of the universe must also be excluded.

Furthermore, there are perhaps as many as fifty physical constants in the universe that must be precisely what they are or the universe and life could not exist. They cannot be a little bit more or a little bit less. They include, for example, the universal constants (Boltzman's constant, Planck's constant, and gravitational constant); the mass of elementary particles (pion rest mass, neutron rest mass, electron rest mass, unit charge, mass-energy relation); and fine structure constants (gravitational, weak interaction, electromagnetic, and strong fine constants). The probability that even just one of these physical constants could have been produced with precisely the value required from the chaos of the Big Bang is vanishingly small, let alone fifty or so. Thus, all theories on an evolutionary origin of the universe contradict the laws of probability and must therefore be excluded on this basis as well.

According to evolutionary theory, starting with the chaos and disorder of the Big Bang and the simplicity of hydrogen and helium gases, the universe created itself. This is clearly a violation of natural law, namely the Second Law of Thermodynamics. According to this law an isolated system can never increase in order and complexity, transforming itself to higher and higher levels of organization. An isolated system will inevitably, with time, run down, becoming more and more disorderly. There are no exceptions. Contrary to this natural law, evolutionists believe the universe is an isolated system which transformed itself from the chaos and disorder of the Big Bang and simplicity of hydrogen and helium gases into the incredibly complex universe we have today. This is a direct violation of the Second Law of Thermodynamics. If natural laws are natural laws, the universe could not have created itself. The only alternative is that it is not an isolated system. There must be a Creator that is external to and independent of the natural universe who was responsible for its origin and who created the natural laws that govern its operation.

The knowledge concerning the laws of thermodynamics was developed about one hundred and fifty years ago, but this knowledge was inscribed in the Bible three thousand years ago. In Psalm 102:25-26 we read, "Of old hast thou laid the foundation of the earth: and the heavens are the work of thy hands. They shall perish, but thou shalt endure: yea, all of them shall wax old like a garment . . ." The Bible tells us that in the beginning God created the heavens and the earth, but now, in their present state, and fully in accord with the Second Law of Thermodynamics, they are wearing out like a suit of clothes. At the time the Bible was written, most people believed that the universe had been here forever and would continue to be here forever. The Bible says, not so, the universe had a beginning and is now wearing out and running down, just as modern science has determined. Furthermore, modern science establishes that the universe had to have a beginning. If the universe had been here forever it would have run down a long time ago. It hasn't run down yet, so it could not have been here forever. Therefore, it had a beginning, and the Biblical statement, "In the beginning," has been scientifically verified, as has its statements concerning the present state of the universe.

Let us now consider theories on the origin of life. Here also the so-called evolutionary origin of life chemist is forced to utilize processes contrary to natural laws. In their experiments designed to produce even very simple molecules, they run into insuperable difficulties. For example, they must postulate some form of energy that would be available to convert simple molecules into more complex molecules. The only forms of energy that would have been available on their hypothetical primitive Earth would have been energy from the Sun, electrical discharges (lightning), radioactive decay, and heat. Most of the available energy would be that from the Sun. All raw forms of energy are destructive. The raw, unshielded ultraviolet light coming from the Sun is deadly, destroying rapidly the biological molecules required for life, such as amino acids, proteins, DNA, and RNA. UV light rapidly kills bacteria by disrupting molecules. All forms of life from bacteria to man are killed by UV light, and you know that if you are hit by lightning you would not become more complex—you would be severely injured or killed.

In all experiments employing these sources of raw energy, the rates of destruction vastly exceed the rates of formation. How then was Miller in his experiment1 able to obtain a small quantity of several amino acids and a few other products? He employed a trap. As tiny quantities of these substances were constantly being created and were immediately isolated in the trap, the gases he employed were circulating continuously through his raw energy, electrical discharges (simulating lightning). Without the trap, the products would have been destroyed by the electrical discharges at rates that vastly exceed the rates of formation, and no detectable quantities of the products would have formed. There could have been no traps available on the hypothetical primitive Earth. If these products were formed in the atmosphere they would be destroyed before they could reach the ocean. Furthermore, the ocean could not have acted as a trap since even there destructive processes would eliminate any surviving products.

"Thou are worthy, O Lord, to receive glory and honor and power: for thou hast created all things, and for thy pleasure they are and were created" (Revelation 4:11).