A thrill-seeking bungee jumper wouldn’t leap off a bridge tethered by a chain, and most people wouldn’t buy a car with its axle welded directly to the frame. It needs a flexible spring system joining the axle and frame to afford a comfortable ride. And from an engineered performance standpoint, a flexible suspension allows tires to oscillate up and down within a specified range, keeping them safely in contact with the road’s surface in varying conditions. Even non-engineers intuitively know when engineering applications call for strong but flexible items.

Likewise, a proper understanding of biological function begins with correlating a living organism’s features with the engineered characteristics—like flexibility—that enable them to work. Unfortunately, the evolutionary biologists who dominate academic and research positions reject the possibility that living things were intelligently designed. Except for systems or bioengineers, biological researchers seem oblivious to the concept that the characteristics of the living systems they study correspond to those of the human-designed systems they use right in their laboratories. 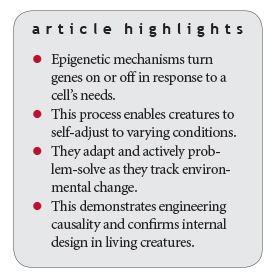 Thus, even in a highly researched and widely popularized field like epigenetics,1 evolutionary thinking tends to underappreciate the flexibility that epigenetic mechanisms confer on an organism’s adaptability. But a quick, design-based overview of epigenetics will make it easier to see.

The engineered elegance of flexible designs is that they allow a part to change form without breaking as it absorbs a stress and then returns to its standard shape when the stress passes. Biologically, our genes code for certain traits, and when a gene changes, a lasting alteration to the trait happens. That’s called a genetic change. But, epigenetic mechanisms enable the trait expressed by a gene to be flexibly and adaptively altered without permanently changing the gene. So, when the stress is gone, the original trait of the gene usually returns. Design analysis gives insight into how the intrinsic flexibility of epigenetics integrates into an organism’s overall adaptability.

Design analysis gives insight into how the intrinsic flexibility of epigenetics integrates into an organism’s overall adaptability.

For example, ponder this evolutionary conundrum. Evolutionary change is supposedly random, slow, and gradual. But if an environment undergoes a sudden life-altering or even life-threatening change, then how could creatures survive long enough to produce the new traits necessary to continue living there—not to mention produce fit offspring?

Suppose that you’re a bioengineer and you are given the exciting challenge of producing the plans and specifications for an organism to be built and somehow animated. The design parameters state that the organism must sustain homeostasis (the self-regulating ability to maintain stable internal conditions) in challenging external conditions and be able to pass those vital adjustments to its offspring.

You identify three capabilities to design: adaptability, reproducibility, and the ability to pass on a biological inheritance (i.e., heritability). You begin work on adaptability.

If changing conditions are seen as problems needing a solution, engineers could identify them as “constantly moving targets.” Tracking systems rapidly follow moving targets—and are already designed. You decide that one would make a good pattern for your epigenetic and other adaptable systems. You know, then, that it will have at least three essential elements: a sensor to detect changed conditions, a logic mechanism that selects suitable responses based on what is detected, and output responses to implement the logical selections.

This organism needs several more design characteristics to attain rapid, reliable adaptability. You restrict its responsive programming to certain conditions, and once equipped with detectors sensitive to only those conditions, the organism effectively specifies for itself what constitutes a stimulus. The adaptive responses must be resilient so your organism can resist damage, mitigate loss, and quickly recover. Therefore, along with being flexible, it should be robust enough to maintain its basic functions even when the challenges become stressful.

Does research identify actual epigenetic system elements that correspond to—and are utilized as—an organism’s tracking system’s sensors, logic centers, and output responses? Yes, in abundance. But you need to apply engineering principles to the literature in order to identify these elements since most evolutionary biologists seem disinclined to interpret the interdependent use of elements as a purposeful system that tracks and responds to environmental changes. Even so, one researcher recently published several meticulous works intended to increase accuracy and reduce misunderstanding amongst his evolutionary colleagues. Nelson Cabej details each step, from first detecting changed conditions to the expression of a suitable trait. In a book section titled “Making Environmental Signals Intelligible to Genes,” he states:

All of the information related to these external stimuli is received by sensory neurons [the sensors], which convert them into specific electrical signals and transmit them to respective centers of the brain for further processing. The processing of the electrical input in these brain centers [the algorithm-based logic mechanisms] interprets the stimulus…in neural circuits to provide it a meaning….The final stage of neural processing is determining the appropriate adaptive response to the anticipated effects of the stimulus itself or of the environmental effects it might presage. The final product of the neural processing is an output that, in the form of a chemical signal, triggers an “adaptive” signal cascade, ultimately leading to the expression of one or a number of specific genes....The processing is a neural codification or a translation of environmental stimuli into messages that are intelligible to genes….The nervous system by using specific signal cascades or gene regulatory networks (GRNs) can adaptively and “at will” relate naturally unrelated external agents to virtually any gene….This mechanism enables the brain to choose from the available off-the-shelf signal cascades and GRNs leading to phenotypic results [the output response] that adapt the organism to the environmental stimulus.2

Cabej’s description perfectly illustrates engineering causality since only verifiable elements are included and no vital element is omitted. The epigenetic modification of an organism’s genes modulates its innate capacity to define the stimulus, interpret it and assign meaning, select the response, translate that into a “gene’s language,” and build the phenotypic result.

Darwin’s finches on the Galapagos Islands are assumed to evolve as genetic variation that causes different beak shapes is “fractioned out” when nature selects the fittest birds that have survived following struggles over scarce resources. New research suggests that this outdated story is misleadingly simplistic. Researchers found that “growing evidence suggests that epigenetic mechanisms, such as DNA methylation, may also be involved in rapid adaptation to new environments.”3 On Santa Cruz Island, a sub-population of birds within two finch species is being exposed to, and consuming far more, human-associated foodstuffs than natural ones. These were labeled “urban finches.”

The team sampled over 1,000 birds in adjacent populations of traditional “rural finches” and newer urban ones. Significant differences were identified in beak depth and width (and the length of a leg bone) between urban and rural populations in one species. Researchers then looked for genetic and epigenetic differences and found dramatic epigenetic variances but few genetic differences. They conclude that epigenetic mechanisms “may play a role in regulating expression of genes in this pathway [for beak shape] and therefore may influence finch morphology….These results are consistent with a potential role of epigenetic variation in rapid adaptation to changing environments.”3

Epigenetics Is Evidence Against Evolutionary Externalism

Despite the fact that the elements an organism uses to deal with an external tracking situation—the sensors, the logic mechanism, the output responses—all originate within the organism itself, evolutionary scientists still mistakenly describe the genetic alterations as being environmentally induced. Confusion typically flows from their rejection of engineering principles to explain the biological function that is involved in the extremely tight organism-environment relationship. Their perspective is also skewed by the belief that active environments mold passive organisms when challenging conditions “drive” their evolution through eons of time.4

Consider the new field of ecological evolutionary developmental biology (“ecoevodevo”) advanced by Scott Gilbert and David Epel.5 A basic tenet is that environments exercise agency and actively control an organism’s genes during development. In their chapter titled “The Environment as a Normal Agent in Producing Phenotypes,” they summarize:

Environmental factors such as temperature, diet, physical stress, the presence of predators, and crowding can generate a phenotype that is suited for that particular environment….Thus, in addition to helping decide the survival of the fittest, the environment is also important in formulating the arrival of the fittest.6

They later add, “Ecological developmental biology has shown that the environment can instruct which phenotype can be produced from the genetic repertoire in the nucleus” since “the environment is giving instructive information as well as selective pressures.”6

Of course, their environment-driven interpretation traces to Darwin, who “accepted the view that the environment directly instructs the organism how to vary.”7 But, no scientific tests can detect environments exercising agency, or sending instructions, or selecting one organism over another. Magical language is so pervasive in environment-focused scenarios about adaptation that it cannot be dismissed as “scientific shorthand” for long, precise explanations. Mystical projections of agency onto unconscious conditions substitute for the overlooked information-based environmental tracking and response systems in organisms.

To correct mystified explanations, Cabej details at length why changed conditions in and of themselves are “meaningless” and “are not instructions telling genes what to do.”8

In everyday parlance, environmental stimuli is [sic] said to induce or even regulate the expression of specific genes. This notion is so engraved in the biological conceptual system that it comes as a revelation when, upon closer scrutiny, it turns out that no external stimuli that could directly induce the expression of any gene are known.9

Epigenetic mechanisms enable populations to rapidly flex with suddenly changed conditions. These self-adjustments are so regulated and precise they’ve actually been described as predictable. The purposeful tightness between a creature’s response to myriads of changed “targets”—conferred by ultra-miniaturized systems—exceeds the most sensitive human-engineered tracking systems.

The evidence is for intelligent, purposeful design by a Master Engineer.

Only when scientists skip over all the details linking a changed condition to an altered gene—and fill the void with mystical events—can they believe that epigenetics demonstrates externalism versus engineering causality. The details tend to confirm a design-based theory emphasizing active, problem-solving, intrinsically adaptable organisms that continuously track environmental changes. The evidence is for intelligent, purposeful design by a Master Engineer.