For thus says the LORD, Who created the heavens,
Who is God, Who formed the earth and made it,
Who has established it, Who did not create it in vain,
Who formed it to be inhabited: “I am the Lord,
and there is no other.”
— Isaiah 45:18 —

In the beginning, God created Earth’s magnetic field, which He designed and installed during the creation week. This field protects our planet from the deadly effects of space-generated charged particles that come from cosmic rays, the solar wind, and coronal mass ejections. Its shielding importance cannot be overstated. Rather than striking living things, these harmful charged particles are redirected by Earth’s magnetic field high in the atmosphere to collide with gas molecules. These collisions sometimes create beautiful light displays at the poles, phenomena we know as the aurora borealis and the aurora australis.

There have been hypotheses and speculation from many eminent scientists but everything we know about the mantle and core has been gleaned remotely. A certain amount of data interpretation must occur to extract useful ideas about our planet’s internal construction. For example, earthquakes generate seismic waves that pass through the earth. Observing these waves can provide information about Earth’s deep interior if properly interpreted.

Two types of earthquake-generated waves include Primary (P) waves and Secondary (S) waves. The P-waves compress the layers of rock or liquid they pass through and travel approximately at twice the speed of an S-wave. Secondary waves travel as undulating waves that can shear rock apart but stop when they hit a liquid boundary. By observing these earthquake waves at research stations positioned around the earth, one can supposedly draw conclusions concerning the makeup of the earth’s mantle and core. Figure 1 accurately illustrates this process.2 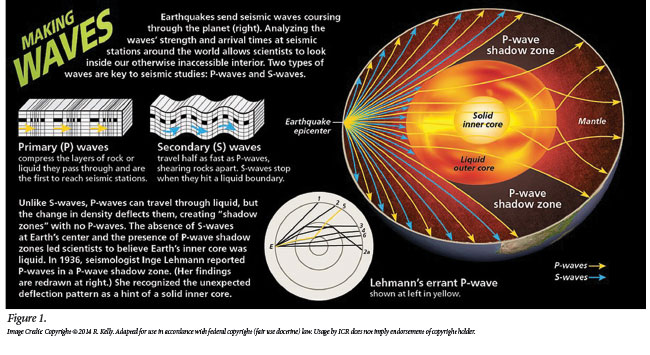 Early in the 20th century, interpretation of observational data led scientists to believe that the earth’s core was liquid. This interpretation was reexamined in 1929 when Inge Lehmann found P-waves in what should have been P-wave shadow zones. In a 1936 paper she argued that the earth must have a solid inner core. Until recently, it has generally been accepted orthodoxy among geologists that the earth consists of a very thin crust, a thick rock mantle made of upper and lower sections, and a core made of a liquid outer core and a solid inner core.

Most secular scientists believe that the earth’s magnetic field is produced by the convection of hotter pockets of molten material that rise through the liquid of the outer core, similar to a lava lamp. Coupled with the earth’s rotation, these pockets are thought to become electrical currents that give rise to the earth’s magnetic field. The process is called a geodynamo or dynamo model, the precise mechanisms of which are still hotly debated. Figure 2 shows an artist’s illustration of how this process might occur.

But a fundamental problem with this geodynamo model has recently come to light. Geophysicists from two British universities discovered that liquid iron at the temperatures and pressures found in the outer core conducted heat two to three times faster from the outer core to the lower mantle than any of their previous models accounted for.3 This means that there would not be enough heat left in the outer core to power the critical heat-driven convection, the process long thought to sustain and renew the earth’s magnetic field. Several recent attempts to save the dynamo model have been made, the most popular by a group of scientists from the University of Illinois and Nanjing University in China.4 They analyzed coda waves5 from 20 years of seismic monitoring data and concluded that their models support an inner core that is further divided into an inner-inner core that is solid and an outer-inner core that is liquid. This outer-inner core is then hypothesized to display the necessary characteristics for a convection-driven geodynamo.

A widely accepted theory maintains there have been many pole reversals of the magnetic field over the course of Earth’s history. How, when, and why these reversals happened have remained in the realm of naturalistic speculation. Dr. Russell Humphreys offered an interesting theory concerning these pole reversals that is consistent with the biblical record and merits serious consideration.6 Secular geologists will tell us that paleomagnetic phenomena7 in rock crystals definitively establish that the field has reversed polarity many times in the distant past. But has it really? Most of the conclusions concerning apparent paleomagnetic phenomena are based on small fluctuations in the recorded magnetic field as magnetometers are passed over the ocean crust. Do all the crystals in rock formations of a similar age provide the same magnetic field data?8 How can we be sure all the magnetic effects observed in rocks are produced by the earth’s magnetic field and not some local phenomenon? David Strangeway believed it is probable that the erratic effects of remnant magnetism were due to lightning strikes.9 Dr. Thomas Barnes stated in 1972, “It is clear that paleomagnetic arguments for reversal of the earth’s magnetic field are not conclusive and depend in the main on arbitrary interpretations of selectively chosen samples.”10

What are the actual observational facts concerning the earth’s magnetic field?

2) The magnetic dipole axis of the earth’s magnetic field is approximately 11.5° offset from the earth’s rotational axis.

3) The magnetic dipole of the earth is not centered on the earth’s core but instead is offset by approximately 700 km toward the direction of southeastern Asia.

4) Paleomagnetic evidence is frequently used to support the dynamo model and thus refute the rational conclusions represented by the observational evidence of item 1. But it is at best inferential in nature and strongly biased toward the deep-time, evolutionary worldview interpretation of data. We have never witnessed a reversal in recorded history.

i) Paleomagnetic evidence for reversals in the earth’s magnetic field can be selective, erratic, and self-contradictory. Samples taken from the early Pleistocene lavas at Cape Kawajiri, Japan, by E. Asami (1954) showed areas in the lava where the magnetization was normal, areas where it was reversed, and areas where they were mixed.10 This suggests rapid reversals of the magnetic field as suggested by Dr. Humphreys11 but is certainly inconsistent with long time period variations of the earth’s magnetic field.

ii) Paleomagnetic measurements assume a deep-time age for their rock/sediment samples based on conventional geological timescales and dating methodologies.

iii) Natural processes other than the earth’s magnetic field can produce the remnant magnetization observed in rock/sediment samples. For example, in 1958 J. R. Balsley and A. F. Buddington discovered a correlation between the state of oxidation and magnetic polarity in metamorphic rocks from the Adirondack mountains.12

iv) Whether or not there have been reversals in Earth’s magnetic field is a matter for further debate and investigation, but if reversals have occurred they most likely occurred rapidly over a very short time period during a major Earth-wide catastrophe such as the Flood.

5) Finally, the model for planetary magnetic field formation put forth by Dr. Humphreys13,14 has thus far proven to have more accurate predictive power concerning solar system magnetic fields than any put forth by the secular community, including the dynamo model. He successfully predicted the 4% decrease in Mercury’s field strength during the timespan between the Mariner 10 space probe’s visit to the planet in 1974 and the 2008–13 Messenger spacecraft’s readings. His creation model’s prediction was based on a 6,000-year age for the decay rates of Mercury and Earth’s magnetic fields.