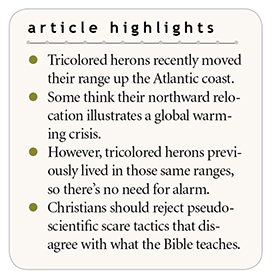 If you love birds, should you fight petroleum production in order to reduce greenhouse gas emissions? How you answer depends on whether you believe man-made global warming is threatening Earth’s climate. That crisis scenario is actually based on evolutionary old-earth assumptions,1 and constant media stories feed the fear.

An amateur naturalist recently sounded the global-warming alarm over tricolored herons expanding their range. He reported that about three-quarters of the population lived in Louisiana in 1976, but now many are relocating northward up the Atlantic coast.2 He had little trouble identifying the culprits:

Isolated islands, prime breeding grounds safe from land-based predators, are being lost everywhere to rising sea levels and devastating storms. The tricolor I was watching was apparently trying to adapt to a rapidly warming planet. It had arrived earlier and farther north than its ancestors ever did [sic].…Birds everywhere are being threatened by the climate crisis. The fossil fuel lobby and its enablers in Washington, DC, are handing tricolors and thousands of other species a life-threatening legacy.2

But wait! Are the fossil fuel lobby and the politically powerful petroleum industry really villains that are forcing the poor tricolored herons to migrate—in temperature-troubled desperation—to a Virginia wildlife refuge “farther north” than their ancestors had ever been? No, because the same writer admitted that earlier heron generations had populated eastern America outside of Louisiana in large numbers.

In the mid-20th century, ornithologists counted tricolored herons as the second most common long-legged wader in the United States (only outnumbered by cattle egret).2

So, why are the tricolored heron range expansions cause for alarm? Should America’s government take action to prevent habitat-warming by greenhouse gas production?

Some say “yes.” On March 19, 2019, a federal district judge ruled from Washington, DC, that public lands in Wyoming could not be leased for petroleum exploration due to unmeasured and perhaps “significant” risks of anthropogenic (man-made) climate change in Wyoming and elsewhere.3 In a 60-page ruling against the Bureau of Land Management (BLM), District Judge Rudolph Contreras rejected BLM’s FONSI (“finding of no significant impact”):

Having reviewed the record [of evidence] and the relevant law [especially the National Environmental Protection Act, which governs Environmental Impact Statements and FONSIs], the Court concludes that…BLM did not sufficiently consider climate change when making those [oil and gas lease] decisions…[and failed] to provide the information necessary for the public and agency decisionmakers to understand the degree to which the leasing decisions at issue would contribute to those [environmental] impacts. In short, BLM did not adequately quantify the climate change impacts of oil and gas leasing.3

This ruling shows that climate change science is serious business. Federal judges often trust speculative claims of global warming alarmists. Judge Contreras expects temperatures in western Wyoming to go up “0.25 to 0.40 degrees Fahrenheit per decade” and those in Utah, eastern Wyoming, and Colorado to “increase by 0.40 to 1.2 degrees Fahrenheit per decade.”3 Even if they did, that’s no killer heat wave!

Christians should reject pseudo-scientific scare tactics that disagree with what the Bible teaches about Earth’s post-Flood stability.

This perceived threat is advocated and marketed by those who assume evolutionary old-earth theories. Blaming bird range changes on global warming is sloppy science—especially when prior range data show the birds lived there not long ago. Christians should reject pseudo-scientific scare tactics that disagree with what the Bible teaches about Earth’s post-Flood stability.4