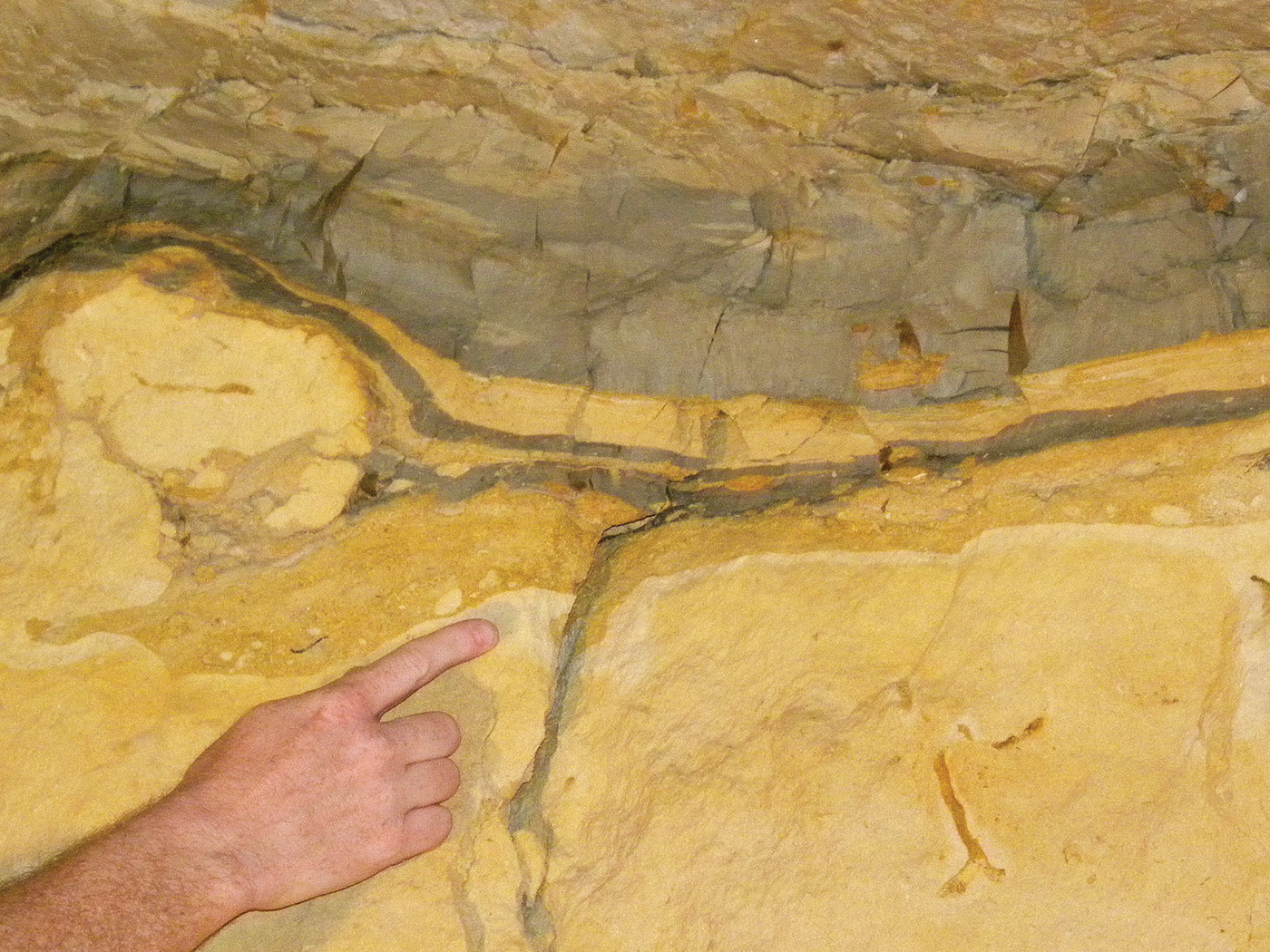 Complex Cretaceous-Paleogene clay layer (gray) in the Geulhemmergroeve tunnels near Geulhem, the Netherlands. Finger is on the actual K-Pg boundary.

Evolution’s speculative story is filled with fanciful tales explaining natural phenomena that are actually best explained by the Bible’s narrative of history. Huge graveyards of fossilized plants and animals are found the world over in water-deposited sandstone, limestone, and shale rocks. Clearly, this is evidence of the global catastrophic deluge recorded in Genesis. To counter this, evolutionists concoct stories based on multiple extinction events to explain changes in the fossils found in strata.

Evolution’s speculative story is filled with fanciful tales explaining natural phenomena that are actually best explained by the Bible’s narrative of history.

One tale is that a huge asteroid slammed into Earth, selectively killing off the dinosaurs while somehow allowing more delicate mammals, birds, insects, fish, and plants to survive. Dinosaurs and many marine reptiles were mysteriously killed en masse and fossilized while many other animals lived. Evolutionists coincide this improbable extinction with the junction of two hypothetical evolutionary geological periods, the Cretaceous and the Paleogene—also called the K-Pg boundary. 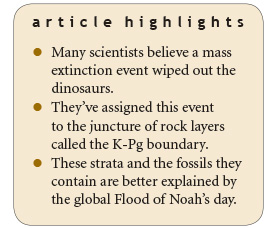 But even by evolutionary standards, all is not well in Darwinland. A new paper has built evolutionary trees from huge DNA data sets for a wide array of mammals.1 The authors tried to determine if the evolution of animal groups, particularly placental mammals, took place before or after the K-Pg boundary. Much disagreement abounds on this question. Some evolutionists claim the origin of placental mammals occurred before the boundary, and others believe it happened mostly afterward. The fossil evidence seems to support a post-K-Pg scenario,2 while many DNA studies of living mammals (calibrated by fossil dates) indicate a pre-K-Pg origin.1,3-7 The conflicting results of genetic vs. paleontological studies in evolution are common and a source of evolutionary contention.8-9

While evolutionists continue squabbling, ICR research based on a biblical Flood framework is making significant strides.

The new study attempts to resolve the issue. The researchers used huge DNA data sets and new statistical data-smoothing techniques to help corral unruly genes and other DNA sequences that don’t behave according to evolutionary assumptions. The authors of the paper state, “Placental mammals underwent a continuous radiation across the K-Pg boundary without apparent interruption by the mass extinction,” and “the K-Pg catastrophe evidently played a limited role in placental diversification.”1 Amazing—the selective extinction properties of the asteroid impact story get even more incredible!

While evolutionists continue squabbling, ICR research based on a biblical Flood framework is making significant strides. Global Flood megasequences as determined from vast oil well and geological outcrop (exposed rock) data sets reveal that the K-Pg mystery can be deciphered in a better way.10 These studies show that the major rock layers covering the continents were laid down in a catastrophic ebb-and-flow model. The K-Pg boundary is found close to one of these ebb-and-flow depositional events. It lies near the boundary of the Tejas and Zuni Megasequences that represent the final two sedimentary packages deposited during the Flood. This offers a more satisfactory explanation of the sequence of fossils based on the ecological zonation of the pre-Flood world.11

There are no real extinction events in the rock record, only the last appearance of organisms as they were encapsulated by the tsunami-like floodwaters.

There are no real extinction events in the rock record, only the last appearance of organisms as they were encapsulated by the tsunami-like floodwaters. Again, the Bible offers the best framework for scientific discovery because it depicts an accurate rendering of life and Earth history that better fits what we observe in the real world.