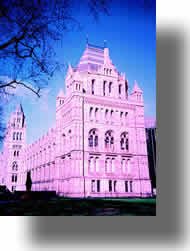 It is not uncommon for Christians to feel oppressed by the heavy emphasis on evolution and naturalistic, anti-Christian sentiment in science museums. From the commentary and interpretation in many museum displays one would think that all legitimate scientists agree with Darwin and creation is a concept accepted only by ignorant fundamentalists.

On my first visit to the Natural History Museum of Great Britain in London I expected a similar experience. But upon approaching the museum I was at first astounded by the size and magnificence of the building. I was then puzzled by the architecture of the building and then angered by what I thought was an intentional attempt to ridicule Christians and the Bible. I came to discover that quite the opposite was true.

The front of the Natural History Museum, protected behind black, iron fences, rises four stories above a two-block stretch of Cromwell Road in South Kensington. Eight-story towers, spires, and pinnacles accent a beautiful German Romanesque style of architecture. Inside the main entrance, a Central Hall rises from a series of arched arcades of stone, capped by cast-iron columns similar to a Victorian railway station. The walls are of a reddish-brown color which contrasts beautifully with the light tan columns and decorations. The impression from inside the Central Hall is one of being in the nave of a large cathedral. 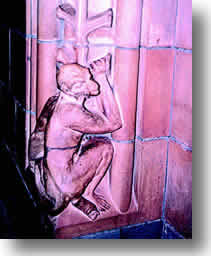 The entire building, inside and out, is covered with terra-cotta figures of plants and animals. The zoological western wing is decorated with living specimens and the geological eastern wing is covered with extinct ones. In the Central Hall terra-cotta monkeys climb the stone columns from the floor to the ceiling. Outside the building on the towers, lions and tigers and other large animals grace the spires. A statue of Adam was originally mounted on the parapet over the main entrance but was knocked down during the bombing of World War II and never replaced.

In the Central Hall only a few objects are centrally displayed—the fossilized skeletal remains of a diplodocus dinosaur from Wyoming, a section of a 1300-year old giant Sequoia from California, and a statue of Richard Owens, the original superintendent of the museum. Statues of Charles Darwin and Thomas Huxley are also displayed on the main floor, but they seem to have been relegated to the obscurity of the lunch room to one side of the Central Hall next to a stack of lunch trays.

Throughout the galleries of the museum many beautiful displays are exhibited in traditional cases and dioramas. Plants and animals of all orders, minerals and meteorites in abundance, and small exhibits of primates and man are displayed in the main museum. A separate section of the museum at the far eastern end entitled "Earth Galleries" is devoted to geology and earth science. An incredible display of minerals is located here along with an "earthquake room" which actually shakes. A modern discussion of earth processes is included in this area. The museum guide talks of a new section of the museum scheduled to open in 2002 entitled "The Darwin Centre" but, apparently, funding of this extravagant addition has been delayed.

Two sections have been added to the main museum—Ecology and Dinosaurs. They both use modern technology and are technically well done. The Ecology area uses an optical illusion to fool the viewer into believing that he is watching a video display on the ecology of the entire globe when, in fact, he is only viewing a cluster of twenty television monitors multiplied several times over in a mirrored closet. The content and presentation are spectacular. The Dinosaur area uses realistic robots containing sensors to direct the dinosaurs to lunge and growl at spectators when they move. Unfortunately, these two displays are built on steel platforms which detract from the elegance of the original museum architecture. 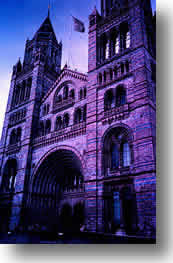 building a monument to Darwin and housing it in a replica of a cathedral. The playful monkeys climbing the columns of the Center Hall convinced me that someone was purposely trying to have fun at Christians' expense. The museum was opened in April, 1881, twenty-two years after Darwin's Origin of Species1 was published, and it was natural to assume that his ideas had been adopted by that time and incorporated into the design of the museum. However, this was not the case. After further study I found that the museum was actually built to honor God and His creation, not to ridicule it. Professor Richard Owen, opponent of the evolutionary ideas of Thomas Huxley and Charles Darwin and superintendent of the Natural History Department of the British Museum, convinced his friend and later-to-be Prime Minister of England, William Gladstone, that the facilities of the British Museum were inadequate. A new museum needed to be built to house the natural history artifacts which had been collected from all over the world during the great expeditions sponsored by the British Museum, the Royal Society, and the Royal Navy. Gladstone concurred, but it took twenty years to locate a site, fund the project, design, and construct the building. It was constructed on the original grounds of the successful 1851 London Exposition which had been sponsored by Prince Albert and Queen Victoria.

The original design for the building was drawn up by Francis Fowke in the Renaissance style. This architectural style was believed by the Gothic Revivalists at the time to be based on pagan, not Christian roots. The final design was derived from Fowke's work but was completed by Alfred Waterhouse in a German Romanesque style. This style intentionally presented a dramatic cathedral-like architecture. Both Owen and Waterhouse, as well as Gladstone, were Christians and wished to offer the greatest possible recognition to God and His creation.

To strike this ecclesiastical note was by no means inept; indeed it was soon taken up all over Europe. Victorian museums tended to be built in a dedicated missionary spirit that was in sympathy with their presentation as secular cathedrals. In particular Owen, like his friend Gladstone but unlike his rival and enemy Huxley, believed that the material world revealed the wisdom and purposes of God, who had created it. A natural history museum should display and make evident the divine rationality of creation; it deserved to be approached in a reverent and religious manner.2

The fact that the Natural History Museum was built with such a viewpoint is surprising to us today who are accustomed to strong animosity toward Christianity from the scientific community. It is possible that Owen and Waterhouse may have also received objections to their designs on religious grounds, but it is a tribute to them and the British government in the mid nineteenth century that such godly principles could predominate. It is likely that the ministry of Charles Haddon Spurgeon in London and the reign of Queen Victoria during this period may have also influenced the cultural climate of England favorably. It was not until the early twentieth century that Darwin's influence on the scientific and political community became oppressive to Christian faith and practice.

Although evolutionary thinking and anti-Christian sentiments continue to encroach upon our society and remove Christian influence from public activities, we should be encouraged by instances of Christian testimonies in public places from the past like the architecture at the Natural History Museum of Great Britain. Sometimes we need to look below the surface to understand how the testimonies got there and what they mean. When we do, we may discover connections with our spiritual forefathers.

We also need to be continually creating testimonies in public places for our descendants. In the U.S. our government buildings are adorned with Bible verses and quotes from godly men who established our government. These Bible verses are under attack today by critics of Christianity but, if it weren't for these statements carved in stone and written into our founding documents, the drift toward secularism would be even more rapid than it is now. We can hope that when our children find these testimonies they will say like the children of Israel, "That this may be a sign among you, that when your children ask their fathers in time to come, saying, What mean ye by these stones?" (Joshua 4:6).

* Dr. Vardiman is Chairman of the Astrophysics Department at ICR and Director of Tours.