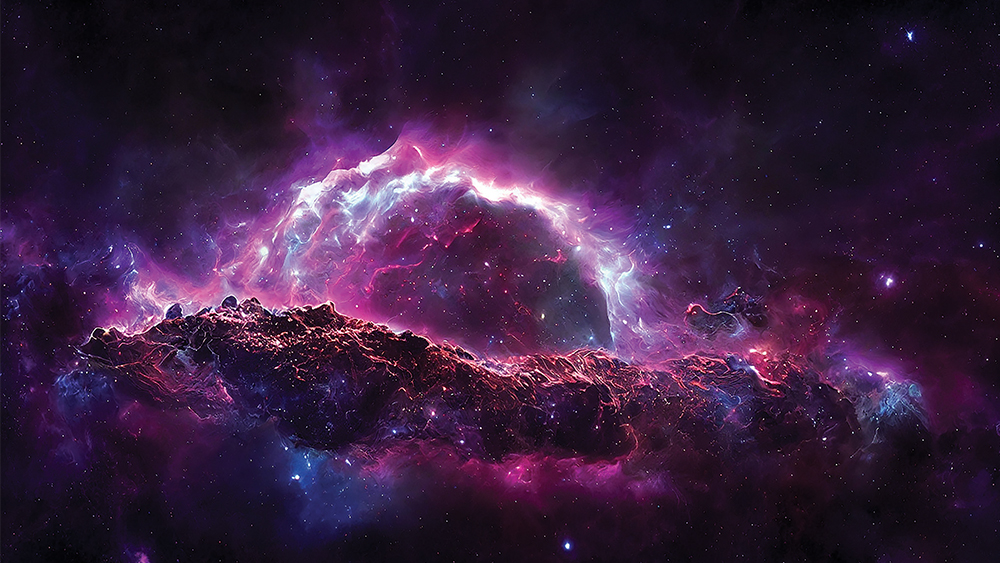 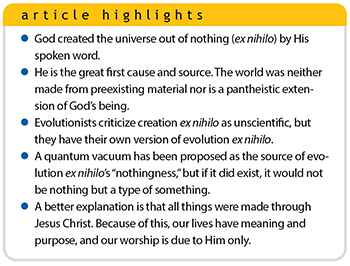 In the Hebrews 11 list of what we are to understand by faith, the first thing noted is the creation of all things by the word of God: “By faith we understand that the worlds were framed by the word of God, so that the things which are seen were not made of things which are visible” (v. 3). Thus, we are to receive by faith the supreme truth that everything in this present universe was brought into existence literally out of nothing by the good pleasure and will of God.

One of the great articles of Christian faith, penned by 121 Puritan clergymen in 1649, succinctly states this foundational truth of Genesis 1.

It pleased God the Father, Son, and Holy Ghost, for the manifestation of the glory of his eternal power, wisdom, and goodness, in the beginning, to create, or make of nothing, the world, and all things therein, whether visible or invisible, in the space of six days, and all very good.1

This truth that God created the universe out of nothing is sometimes described by the Latin phrase ex nihilo (out of nothing). This ability of God to create ex nihilo is not only mentioned in Hebrews 11:3 but is also inferred in Romans 4:17, where God “calls those things which do not exist as though they did.” The English Standard Version says “calls into existence the things that do not exist.” In Psalm 33, the Scriptures say, “By the word of the LORD the heavens were made, and all the host of them by the breath of His mouth….For He spoke, and it was done; He commanded, and it stood fast” (vv. 6, 9).

When God speaks something into existence such as the universe that didn’t previously exist, what is implied? First, nothingness cannot beget nothingness. Truly, God is the great first cause and source of the entire universe. This is traditionally called the cosmological argument in apologetics.

What Is Creation Ex Nihilo ?

What exactly is the fundamental meaning of the biblical doctrine of ex nihilo? This Genesis-based proposition answers two age-old questions—“What is the material cause of the universe?” and “What did God make the world out of?” In short, the answer to both questions is “nothing.” But what is “nothing”? Philosophically speaking, any definition or paradigm describing nothing could actually make it something.

Some philosophers and theologians have thought that it could be more descriptive to speak of creation into nothing instead of out of nothing. While both ideas are helpful, we need to understand that creation is neither “out of” a preexisting material nor “into” a preexisting place. In this regard, theologian John Frame said, “We must oppose both the Aristotelian notion of an eternal ‘matter’ and the Platonic notion of an eternal ‘receptacle.”’2 These were popular ancient pagan Greek philosophies.

Yet another false view is the proposition that the universe is merely an extension or emanation of God Himself. This idea is known as pantheism, where creation and God are one—making creation itself divine.

So, how can we best understand the idea that an ex nihilo creation came from a transcendent God? Instead of saying that God created the world from nothing, it might be better to say that God created the universe without any preexisting material. As the Scriptures indicate, God spoke and things appeared, including space and time (a medium) for all created things to occupy and in which to function.

When we construct creation ex nihilo in this way, it requires no definition of “nothing”; it simply refutes the nonbiblical view that God created the universe from preexisting stuff. In this sense, creation ex nihilo can be thought of philosophically as a negative proposition that affirms that the world was neither made from preexisting finite material nor is a pantheistic extension of God’s being. Thus, since there are no other alternatives, the universe was not made from anything—it was made from nothing (ex nihilo).

Amazingly, evolutionists have often criticized creationists for the doctrine of creation ex nihilo being unscientific, while they maintain their own version of evolution ex nihilo without a creator or logical first cause.3 What hypocrisy! The biblical creation doctrine quite logically maintains that an infinite, omnipotent, omniscient, transcendent, self-existing Creator God who upholds and personally interacts with His creation (is immanent) is the source and first cause of the universe. Evolutionists, however, have no reasonable source or first cause for their paradigm of Big Bang ex nihilo cosmology (evolution ex nihilo)! Even worse, a considerable amount of astronomical scientific data has now refuted the so-called evidence for a Big Bang and an ancient universe.4-10

Edward P. Tryon was one of the first modern physicists to promote evolution ex nihilo. He recounted the whole affair, saying:

In 1973, I proposed that our Universe had been created spontaneously from nothing (ex nihilo), as a result of established principles of physics. This proposal variously struck people as preposterous, enchanting, or both.11

In a 2002 Discover magazine article, the authors well-summarized the idea of evolution ex nihilo by highlighting an interview with theoretical physicist Alan Guth.

The primordial “stuff” of inflation [aftereffect of the Big Bang], he and other cosmologists contend, is very likely a spontaneous creation, a no-strings gift that boiled out of absolutely nowhere by means of an utterly random but nonetheless scientifically possible process.12

Theoretical physicist and cosmologist Lawrence Krauss published a book in 2012 titled A Universe from Nothing, the final chapter of which was contributed by well-known atheist Richard Dawkins.13 The ideas Krauss promoted in his book and other sources have received strong criticism, with astronomer Luke Barnes saying:

What Krauss and other theoretical physicists are really talking about when they refer to nothingness is the theoretical idea of a quantum vacuum. If a quantum vacuum did actually exist (according to theoretical physicists), it would not be nothing but a type of something. It would have properties, it would have energy (albeit very little), it would fluctuate, it could contribute to the alleged expansion of the universe (now in doubt), and it would obey the complex equations of quantum field theory. In returning to our argument of nothingness discussed above, you could describe it as having certain properties. In other words, the quantum vacuum is not “nothing,” and this type of hypothesis leads to a view of the sudden appearance of the universe that is essentially nothing more than a fortuitous accident.

Nevertheless, theoretical physicists have seemed to be quite enamored with evolution ex nihilo and a quantum vacuum, beginning, as mentioned, in 1973 with Edward Tyron, who said, “So I conjectured that our Universe had its physical origin as a quantum fluctuation of some pre-existing true vacuum, or state of nothingness.”11 Even more absurd is a statement made by Alan Guth that “theoretically, anything—a dog, a house, a planet—can pop into existence by means of this quantum quirk, which physicists call a vacuum fluctuation.”12 Krauss says “that we all literally emerged from quantum nothingness” and “this is so strikingly nonintuitive that it can seem almost magical.”13

Henry M. Morris, the founder of the Institute for Creation Research, best summarized the efforts of modern evolutionary cosmologists when he said:

Regardless of the sophisticated mathematical apparatus leading the inflationary-universe cosmogonists to their remarkable statement of faith in the omnipotence of nothingness, there will continue to be a few realists who prefer the creationist alternative: “In the beginning God created the heaven and the earth.”3

In addition to the opening chapters of Genesis, we find more information regarding creation in the New Testament. At the beginning of John’s gospel, we’re told concerning Jesus Christ, the God-man, “All things were made through Him, and without Him nothing was made that was made” (John 1:3). The first clause in this verse in the Greek text literally reads “all things through Him came to be,” with the Greek word for “all things” (panta) referring to the entire universe.

God is our sovereign Lord and Creator, and He rules over all the universe. There is nothing in creation that’s to be worshiped instead of or in addition to Him (e.g., nature). However, if we were to deny creation ex nihilo, we would logically have to affirm that some sort of matter has always existed and that it is eternal like God. This erroneous idea is an affront to God’s independence and sovereignty and the fact that our worship is due to Him only. And if matter or living creatures existed apart from God, then what inherent right would God have to rule over creation and govern it for His glory?

But God did create the universe ex nihilo—out of nothing. Therefore, the universe and our lives have meaning and purpose. And God has revealed that purpose to us in His holy Word, the Bible, and in His coming as God in the flesh—the Lord Jesus Christ. Let us serve and worship this mighty Creator God and meditate upon His Word.

* Dr. Tomkins is Director of Research and earned his Ph.D. in genetics from Clemson University.