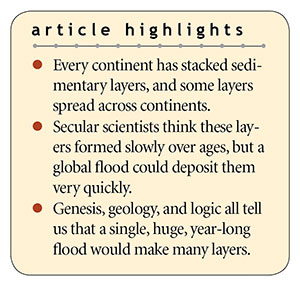 The Grand Canyon exposes layer after layer of sedimentary rock stacked one atop the other like vast, multicolored pancakes in the earth. Other cliff faces and highway road cuts reveal red mudstones, white limestones, and yellow sandstone layers. How did the layers get there? Most people believe that many layers require many years. They imagine ancient worlds that gave each layer unique colors, grain types, and fossils.

In truth, you don’t need much time to make rock layers if you have plenty of water. Some floods move more sediment in mere hours than regular rain moves over centuries. How about a world-destroying flood? That would cause more erosion and deposition than most people can even imagine. No wonder those who view Genesis as history see Noah’s Flood behind the many varied, thick, and continent-covering rock layers across the world.

In truth, you don’t need much time to make rock layers if you have plenty of water.

But could a worldwide flood like the Bible describes make layers that look so different? Three key sources say yes.

First, the Bible. Whoever says that one flood could not form many different layers must have missed Genesis 6–8, which describes a flood that lasted about a year! This was no small-time, single-deposit flood like we see today. The text tells of water rising for 150 days, sloshing back and forth over all lands, then retreating into the ocean basins for months. How could these many stages not form many layers?

Day 150 seems to mark the Flood’s peak. “And the waters receded continually from the earth. At the end of the hundred and fifty days the waters decreased.”1 The phrase “receded continually” literally means “going and returning.”2 Enormous tsunami-like events shoved muddy waters back and forth over earlier deposits. They scraped and re-scraped Earth’s surface. Mud-loaded waters going one way would make different layers than later tsunamis headed in another direction. Each one would pick up and lay down different sediments.

The last source is logic. How could one layer of muddy water keep sliding over the earth nonstop for a year? It would stop moving after friction sapped its energy. So, for one flood to last so long, it would need many pulses. Smaller flooding episodes shifted water flow rates and directions. Flows eroded hard rock and deposited and redeposited sediments. We should expect many different types of layers from a pulsing, year-long flood!

Genesis, geology, and logic remind us that Noah’s Flood definitely would have made water-laid rock layers just like we see today.

So, the next time you see all those layers at the Grand Canyon or your local road cut, remember that Genesis describes water rising for months, surging back and forth, then falling for more months—eroding and redepositing all the while. Geology confirms past mega-catastrophes that match the global scale that Genesis describes, and logic confirms that any flood that lasted a whole year would have sands and muds moving different ways. Genesis, geology, and logic remind us that Noah’s Flood definitely would have made water-laid rock layers just like we see today.