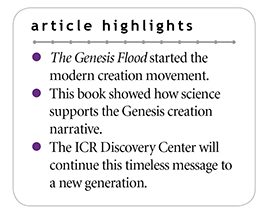 The book The Genesis Flood has rightly been credited as the catalyst of the modern revival of scientific biblical creationism. Published in 1961 and still in print, no other work has had such a profound effect on Christian thought concerning the theological and scientific credibility of biblical creation in particular and the veracity of Scripture in general. Its magnificent apologetic is stunning—and each of us owes a great debt of gratitude to Drs. John Whitcomb and Henry Morris for providing this powerful weapon in the defense of the faith.

At the time, no organization existed that was wholly dedicated to creation science research. But the enthusiastic fervor that quickly followed led to the founding of the Creation Research Society in 1963 and the Institute for Creation Research in 1970. Many fine organizations have sprung up since, but these two original ministries, still in existence, continue to provide the bulk of the technical research essential for the creation science movement.

The unique pairing of a theologian (Whitcomb) and a scientist (Morris) played a part in the effectiveness of The Genesis Flood. I’m convinced that the reason for its unrivaled influence—aside from God’s direct blessing—was the authors’ frank acceptance of the Genesis record as absolutely and literally true, showing that Genesis offered a better basis for understanding the scientific data relating to Earth’s history than any evolutionary model. This conviction has been the dominant theme of all of ICR’s ministries.

ICR’s highly successful creation conferences and publications have all shown that the literal Genesis record of supernatural creation is the foundation of the gospel of Christ and all crucial aspects of biblical Christianity. True education, true science, and the institution of marriage and family are also based on the truths found in Genesis. In fact, all truth in every area of life finds its beginning in the Genesis record—the very word means “beginning.” God placed it first in the Bible for a good reason. It is the foundation of all that comes after it.

But while Genesis is the foundation, it’s not the complete structure. Jesus Christ is our Creator, and He became our Redeemer and will one day be acknowledged by all as King and Lord. Thus, pointing the world back to God is our ultimate goal. No organization could achieve such a task alone, and it will never be fully accomplished until Christ returns to “make all things new” (Revelation 21:5). But we earnestly work toward that end—doing what we can to meet this great challenge.

This has always been ICR’s purpose, and by God’s grace it will continue to be until Christ comes again. Almost 60 years since The Genesis Flood was first published and 13 years since our founder Dr. Morris went home to heaven, ICR is committed to the same timeless message of the truth of God’s creation and His loving work of redemption. Soon, the ICR Discovery Center for Science & Earth History will become the public face of this ministry and will reach the next generation with the evidence that the Bible is right and its message is true.