The harvest truly is plentiful, but the laborers are few. (Matthew 9:37)

ICR constantly receives invitations to speak to churches and organizations around the country, and we try to send our experts to as many events as possible. We are committed to serving the Lord, teaching “whatsoever” He has revealed to us through His Word and His creation. Two thousand years ago, the Lord Jesus challenged His disciples to go all over the world and declare the glorious gospel to all creatures (Mark 16:15). We are to “make disciples” and “baptize” and “teach” everything that the Lord has commanded (Matthew 28:19-20).

The churches are the agency that our Lord commissioned to carry out this vast responsibility, and over the two millennia since His initial command they have spread over every continent among most cultures and in countless cities, villages, and hamlets around the world.

Prior to the Reformation and the subsequent rise of the Industrial Revolution, the worldwide commission was carried out mainly by the churches. As the “protesting” movements took hold and the wealth of the world began to be distributed widely among more people, something changed—the message and mission became muddled by the unwieldy necessity of “bigness” driven by the organized machinery of state and international churches. In time, money and power were required to perpetuate the machinery, and the ends began to justify the means. The gospel was often packaged in programs to increase and maintain attendance, and the teaching of all things shifted from Christ’s clear message to official dogma and denominational creeds.

Yes, there are exceptions, but many of those churches—designed and commissioned by the Lord Jesus and led through the direction of the Holy Spirit in the lives of godly elders and deacons—have grown fewer in number and smaller in size over the past century. Driven by a growing sense of urgency, churches began to band together in their spheres of influence, and this resulted in a wide assortment of parachurch organizations and mission agencies sprouting across Europe and the United States. In many cases, these organizations were started and overseen by small groups of churches in an attempt to multiply their efforts. Today, most of those extra-church agencies are independent.

It sometimes appears that churches and parachurch organizations are “fishing” in the same ponds—and sometimes they appear to troll for each other’s fish. As the Lord Jesus would have us understand, the harvest is really, really big, if we would only “lift up [our] eyes and look at the fields, for they are already white for harvest” (John 4:35)!

The 2010 population of the United States has been recorded at over 308 million people (308,747,508).1 According to the Hartford Institute, 80 percent of people in America believe in God and belong to a faith group, 75 percent (over 230,000,000) identify themselves as Christian, 65 percent claim an affiliation with a congregation, 49 percent are claimed as “adherents” by all congregations, but only 20 percent attend weekly worship.2

The Association of Statisticians of American Religious Bodies (ASARB) has conducted surveys since 1952 and is one of the more thorough organizations that breaks out the various congregations and denominations across America. Their analysis of the 2010 U.S. Census includes a differentiation between “members,” as traditionally defined, and the more applicable term “adherents,” which includes active participants who are not members.3 ASARB indicates that there are over 150 million (150,686,156) total adherents and 344,894 total congregations in America. There are 77 million (77,546,696) total Protestants and almost 59 million (58,928,987) Catholics. Of the Protestants, over 50 million (50,013,803) belong to an “evangelical” or “conservative” congregation, the largest group of which is the Southern Baptists, claiming almost 20 million (19,896,975) adherents in 2010. Those more than 77 million Protestants are in some 286,000 churches. The over 50 million evangelicals and conservatives are in over 191,000 churches.6

The Hartford Institute breaks down the sizes of those various church groups and congregations (excluding Catholic and Orthodox). These figures are important for us to understand.

As this chart reflects, the majority of Protestant churches in this country have under 500 members. In addition, only 40 Protestant churches across this land have memberships of 10,000 or more. Look again. Nearly 300,000 churches have less than 1,000 attendees on Sunday morning—over half of those congregations have less than 100—with a total of 43 million attending! The vast majority of practicing Christians are in small churches. The big churches get most of the press and, usually, the better-trained leaders. These demographics make for some real challenges—but also some fantastic opportunities. 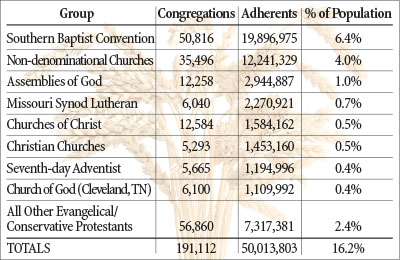 ASARB tabulated the data from the 2010 U.S. Religion Census into a very interesting analysis of the main evangelical and conservative denominations.6 Here is the table that emerges.

Perhaps a quick summary of the “big” pieces might be helpful. 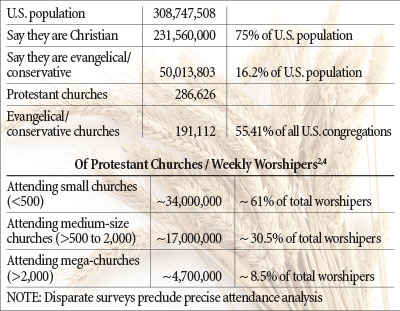 These data reveal an interesting set of issues. Obviously, a rather small portion of the U.S. population is within the evangelical and conservative community, and the bulk of those folks attend smaller churches. Most churches concentrate (as they are supposed to) on the community in which they are planted. Some of the larger churches are able to afford external ministries through radio or television, and some are strong supporters of educational institutions.

Parachurch organizations generally focus on evangelism (mission agencies, campus ministries, etc.) or discipleship (Precept Ministries International, Bible Study Fellowship, etc.). Others have unique ministries through music (Gaithers, Hoppers, etc.), counseling (Focus on the Family, etc.), or specialized radio ministries (Hope for the Heart, Back to the Bible, etc.). All of these see themselves as resources for the churches or are attempting to perform a service that most churches cannot.

There are a number of problems that are connected with broad-scale Kingdom work. Churches, by the Lord’s design, are focused on a limited number of people. Even the mega-churches with weekly attendance in the thousands basically minister to the same group each week. Among those churches with external programs (radio, TV, etc.), the contact is often limited and detached. Parachurch organizations are not churches and, even with the best of intentions, cannot and should not attempt to usurp the role of churches. At best, parachurch ministries should evangelize and/or disciple with the intent to assist and to ultimately steer folks into good, local churches.

The Challenge of Plenty

Rather than trying to solve problems here, perhaps ICR can share its own challenges with you. The Institute for Creation Research is, foremost, a discipleship organization. Our mission is to share the wonderful evidence God has provided through His own creation that confirms the accuracy and authenticity of His Word. The driving purpose behind our research, publications, seminars, and other resources is to help God’s people increase their confidence in the Scripture and to supply resources for church families that will strengthen their faith and sharpen their worldview.

ICR is a rather small organization compared to many—certainly, we are smaller than most churches. Our cadre of scientists and speakers tries to meet the requests for as many engagements as possible—some 200 or so each year through which we speak or present creation evidence to perhaps 100,000 people. Our publications reach some 500,000 readers each month, and we distribute tens of thousands of our books (mostly free) each year. But all of these numbers represent a very small percentage of the 50 million evangelicals—let alone the other 180 million “Christians”—in the United States!

Obviously, it is physically impossible to consistently be in front of that number of people. Perhaps we could multiply those efforts through radio (we do) and television (not yet), but true discipleship—training God’s twice-born to grow in maturity in their understanding and use of His Word—is much more than a short presentation or a detached “show.” Often, such efforts become little more than the “very lovely song of one who has a pleasant voice and can play well on an instrument; for they hear your words, but they do not do them” (Ezekiel 33:32).

How can ICR face the challenge to reach the “plenty” already “white unto harvest”? What mechanisms can we devise to reach the smaller churches—where over 40 million evangelicals worship and some languish—let alone to provide a continuing training resource that will stimulate “one another to love and good works” (Hebrews 10:24)?

Plans are in the works! More about this in next month’s issue.

Adam and the Animals
"And out of the ground the Lord God formed every beast of the field, and every fowl of the air; and brought them unto Adam to see what he would call...
BY: HENRY M. MORRIS, PH.D.

Is Man a "Higher" Animal?
Frequently we see the statement that man is an advanced animal, implying he is higher on the evolutionary tree than the others. Let's examine this...
BY: JOHN D. MORRIS, PH.D.
More Environment and Ecology

Orphaned Manatee Rescued in Florida Keys
Necessities can be keys to forming new friendships, an orphaned baby manatee learned earlier this month.1 Maybe there is also a lesson for us...
BY: JAMES J. S. JOHNSON, J.D., TH.D.
More Impact