Have you ever toured a cave? There is something especially intriguing about exploring the deep, dark underground and its mysterious animals and rock formations. Tour guides at Carlsbad Caverns and at caves around the world repeat the mantra that it takes a thousand years of slow drips to build just a centimeter of these formations, called speleothems.1 Two observations about speleothems show they can form much faster than that. These observations help explain why we would expect caves and their speleothems to have formed within the Bible’s timeline of only several thousand years.

Cave Formations and the Bible 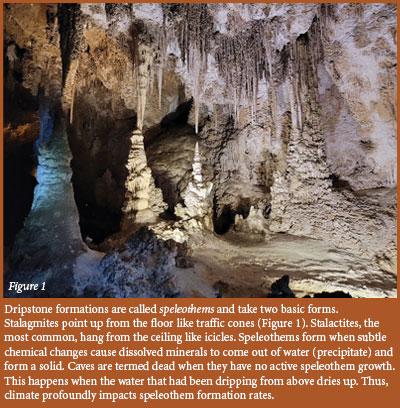 Most modern speleothems typically grow very slowly. Mainstream geologists extrapolate today’s slow rates into the past to estimate millions of years for some of the large speleothems. Such conclusions depend on whether or not we believe that today’s processes (such as rainfall and erosion) happened at the same rates in the distant past. And we know they did not.

Instead, catastrophic activities that follow from the Bible’s record of Noah’s Flood and the later Ice Age shaped the large geological structures on our planet. And science sings the same tune.

The Ice Age and Caves

The first observation that suggests speedy speleothem formation starts by noting that the Carlsbad region of New Mexico has been dry for centuries. This arid climate means most of its speleothems are dormant. They therefore largely formed in the past. But when and how fast? Scientifically, we cannot assert that they grew slowly back then if their growth rate is zero today, and nobody was there to measure the growth rates in the distant past. What if Carlsbad’s speleothems formed fast in a wetter past?

In general, cave formation likely began with the help of receding waters from the global Flood and the rapid circulation of water underground. Then during the Ice Age, the American Southwest was wet for centuries. Enough water flowed there to quickly deposit Carlsbad’s speleothems.2 And the Ice Age saw wetter climates around the world. In other words, the Ice Age offers a stronger reason to suppose fast speleothems than slow ones.

Fossilized animals encased in Carlsbad’s speleothems point to a second observation that fits fast speleothem formation. The October 1953 issue of National Geographic published a pictorial overview of Carlsbad Caverns. One photo showed a bat’s skeleton encased in a stalagmite. This intriguing picture (Figure 2) became iconic to those interested in questioning the “thousands of years per centimeter” mantra. The bat fossil demonstrates the speed with which stalagmites can form. How could a bat’s intact bones lie undisturbed and undecayed unless its stalagmite formed fast?

Dave Woetzel, coauthor of this article, visited Carlsbad in 2021 with the goal of documenting this rock-encased bat. He was surprised to discover more than one such bat (Figure 3). One spot in the Lower Cave at Carlsbad holds special interest (Figure 4). A whole bat lies entombed in a large speleothem that is part of the Colonel Boles Formation. A guide was able to photograph the bat remains by backlighting the translucent speleothem. And this one suggested more than just bones locked in rock.

Do you see the discoloration in and below the body of the bat? We wonder if decaying flesh and body tissue slid down as the wet stalagmite formed around the bat. Soft tissues decay faster than bone. On the cave floor, cave crickets scavenge the flesh off fallen, dead bats. It looks like this bat got entombed faster than it could get scavenged or decay. While bones might last for thousands of years, softer tissues would have decayed long before the often-cited millennia for speleothem formation would have elapsed.3

Bible scoffers have used caves as platforms to propagate old-earth ideas. But actual speleothem formation rates and the bats they encapsulate tell a far different story. We don’t need a thousand years to make one centimeter of speleothem. With enough water, such as the Ice Age supplied, even large calcite formations can form in mere centuries. Speleothems can form fast, and bats trapped in rocks show it.

* Dr. Thomas is Research Scientist at the Institute for Creation Research and earned his Ph.D. in paleobiochemistry from the University of Liverpool. Dave Woetzel is an active creation researcher with experience in artifacts and zoology and earned an M.S. from Clemson University.