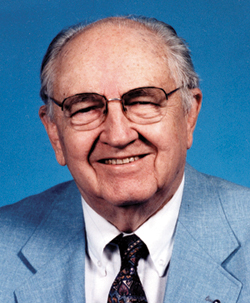 The February 25 homegoing of my father, Dr. Henry Morris, was not unexpected, but neither were we ready to let him go. At 87, his vigor and battle readiness had waned somewhat, as he succumbed to the relentless onslaught of entropy, but the last few days before he died, as he realized he would never regain everything his two recent strokes had taken, he wanted to go. His eyes were as firmly fixed on heaven's gates as they had always been on the goal of restoring Scripture and creation thinking to their rightful place in men's minds.

As long as I can remember, he has been a man of unswerving commitment to truth, especially Scriptural truth. He was never a "Don Quixote," pursuing hopeless dreams, but when he saw a vital need, or encountered an important unanswered question, or was blocked by a lie that obstructed truth, he moved to fill it or answer it or tear it down. He was a gentle, peaceful man, although his life was filled with battle and marked by courage. And God granted him many successes. Through all the victories and despite the accolades, he remained a humble man, the kind of man God most often choos-es to use. He would agree that "neither is he that planteth any thing, neither he that watereth; but God that giveth the increase" (I Corinthians 3:7).

He has been wide-ly acclaimed as the "father of modern creationism," and in many ways that is so. His books and lectures plowed fallow ground, preparing it for the seed to follow. His insistence on Scriptural authority sets an example for those of us who come behind. Even though he is gone, he will participate in the coming harvest.

He considered the Institute for Creation Research to be one of his "children." He loved it, cared for it, and prayed for it just as a father would his children. The foundation he laid provides the solid ground on which we continue to build. Ensuing research will provide new answers and perhaps alter current thinking, but never, as long as I am President, will we deviate from Scripture, just as he has always insisted.

The ICR will not become a "Henry Morris Memorial." Instead it will continue to press toward the goals he envisioned. However, much of his legacy is timeless, such as his Days of Praise articles, and some of his most important ones may be repeated every few years. His science books may go out of date, as new discoveries are made, but they primarily are "worldview" statements and should remain in print. Minor scientific updating may be warranted, but the spirit of his writings will not be altered.

The ICR Board of Trustees has initiated plans to found a "Henry Morris Center" in a central location which will enhance the ICR ministries. It will serve as the center from which our distance education efforts flow, and as a focus for training of professionals. The ICR Graduate School may find a home there too, but no decision has yet been made. This center will be the fulfillment of my father's long-standing dream of quality creation education, his plan for changing the world. A memorial fund has been initiated to fund the center, and already the total grows. God has answered so many of his prayers, we expect this to be answered as well.

The memorial service for him bless-ed all who were present. Drs. John Whitcomb and Tim LaHaye were joined by a recording of Dr. D. James Kennedy to pay tribute to him and thank God for His blessings. A DVD was produced of the entire service and includes testimonies of many of those present.