Do we live on an earth that is 4.6 billion years old or only thousands of years old? The age of our planet is a significant stumbling block for many Christians and keeps countless others from even considering the scriptural message—specifically, the gospel. Indeed, an old earth means death isn’t really the wages of sin (Romans 6:23) since violence, pain, and death would have had to reign in the world millions of years before sin made its first appearance. If that were the case, then God, not Adam, would be directly responsible for this cruel regime of endless suffering.

But Scripture is silent regarding the millions and billions of years demanded by the secular scientific community. The New Testament clearly states God was speaking through “the mouth of His holy prophets, who have been since the world began” (Luke 1:70; Acts 3:21). Earth, our solar system, and the universe were created along with God’s first prophet during the six-day creation week just thousands of years ago. Adam, made on Day 6, recorded the first prophecy in Genesis 3.1

Creation scientists have shown we live on a young planet.2,3,4 The field of biology reveals the youth of our Earth in dramatic fashion. Some of the oldest recovered biomolecules were found in crinoid (a class of sea animals having a long stalk) fossils in Iowa, Indiana, and Ohio.5 Secular scientists have yet to figure out how these biomolecules could last for the supposed hundreds of millions of years since these crinoids were deposited. Living material simply decays too quickly to survive so long a time. The existence of still-intact, complicated chemicals of life makes better sense if they were buried in Noah’s Flood only thousands of years ago.

Original biological material has been detected in a fossil leaf that is identical to modern leaves despite a supposed 50-million-year age assignment.6 Clear evidence of unfossilized plant tissue has been reported in a kimberlite crater in Canada.7 In a specimen supposedly “53 million years old,” scientists found exquisitely preserved unfossilized wood. 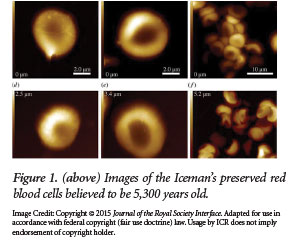 And Nature reported a new record for organic material in a dinosaur fossil—possible collagen (protein) in dinosaur eggs from the early Jurassic.

But it is not just the age of the fossils that is notable, the researchers say. Spectroscopic analysis of bone-tissue samples from the Chinese nesting site revealed the oldest organic material ever seen in a terrestrial vertebrate. That was surprising because the fossilized femur bones were delicate and porous, which made them vulnerable to the corrosive effects of weathering and groundwater, says Reisz [lead author of the study].8

But this preserved organic material would not be surprising if Earth is as young as the Bible and significant amounts of scientific evidence indicate. The article went on to say, “Reisz thinks that the complex proteins his team detected in that organic material are preserved collagen.”8 But collagen is a soft tissue, and studies show it can’t last millions of years.9 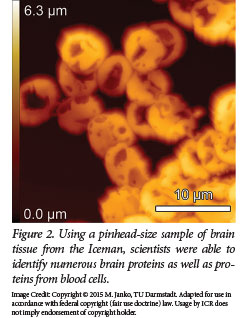 The article stated these findings “could have major implications for our understanding of the organic fossil record.”10 Creation scientists heartily agree. They expect such discoveries based on a recent flood that laid these sediments down rapidly, preserving the organic material in cement-like sedimentary rock before the tissues decayed entirely—readying them to be discovered just thousands of years later. 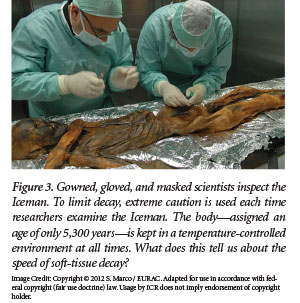 How about delicate nucleic acids—can they be preserved for millions of years? “The story of life on Earth keeps getting stranger,” states a LiveScience article reporting on fungus found in supposedly 2.7-million-year-old mud. “This was an unexpected discovery,” said William Orsi, microbiologist at the Woods Hole Oceanographic Institution in Massachusetts. “We’ve found diatoms [microscopic algae] and the nucleic acid [DNA] preserved in sediments for millions of years.”11 This may be a strange, getting stranger, story to the evolutionist, but the evidence once again lines up precisely with the young-earth model.

More recently, red blood cells were extracted from the famous Iceman, a man preserved in an alpine glacier in Italy who was discovered in 1991.12 Although his death was dated at about 5,300 years ago, researchers were successful in obtaining samples of his cells, making this the oldest known sampling of such tissue. This raises an interesting question for the evolutionist: Were there not possible red blood cells also found in dinosaur soft tissue that appear just as red and intact as the famous Iceman’s?13 The problem is that evolutionary theory states dinosaurs supposedly lived many millions of years earlier than humans, but the physical, undecayed evidence brings them dangerously close together time-wise. 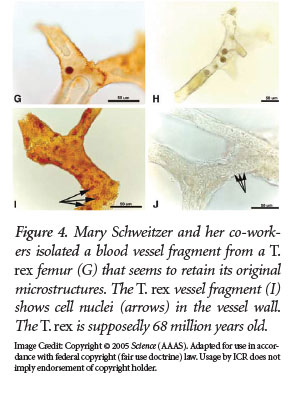 Soft tissue and organic (carbon-based) remains found deep in the layers of the geologic column do not bode well for evolutionists who insist they were laid down over the span of a half-billion years. Such a long time means innumerable biological processes as well as meteorological and geological events would affect every square inch of this planet’s surface several times over and deep underground. Does the evolutionist really believe fossils containing soft tissue can survive many millions of years of bacteria, worms, arthropods, volcanoes, tsunamis, weather’s constant drenching, drying, freezing and thawing, and even earthquakes? Periods of extended sunlight and pH variation must also be considered. 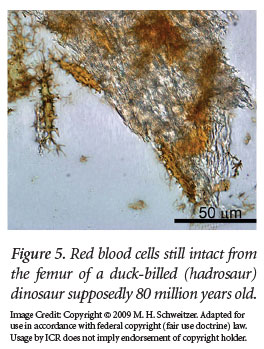 In 2008 scientists announced the creation of a “doomsday” vault containing the world’s seed collection.14 If a world war or a natural catastrophe happened, 4.5 million seed samples would be protected in this temperature-controlled, secure enclosure in a mountainside on an island between the North Pole and Norway. No expense was spared to use 21st-century technology to ensure the seeds last for 1,000 years. But how are we expected to believe that randomly buried animals that supposedly fossilized millions of years ago but still clearly contain soft tissue remained unspoiled without the benefit of any preservation technology whatsoever?

Clearly, science and the biblical record agree. A global flood just 4,500 years ago or so is the best explanation for why scientists are finding unfossilized plant and animal material—including red blood cells—throughout the geologic column all over the world.

Image Credit: Copyright © 2012 S. Marco / EURAC. Adapted for use in accordance with federal copyright (fair use doctrine) law. Usage by ICR does not imply endorsement of copyright holder.