No star. No angels. No shepherds. No wise men. No mention of Bethlehem or Mary and Joseph. No compelling story of the babe in a manger. No genealogy of Jesus to introduce His birth. No elaborate “Christmas Story” describing the events preceding and surrounding the birth of Jesus.

John the Apostle does none of these things when he begins to tell the story of Jesus of Nazareth.

Instead, he pens a unique introduction to the words and works of Jesus that reaches back to eternity past, echoing the introductory phrase in Genesis—“In the beginning.” John establishes the nature and character of Jesus as he begins to unfold such familiar themes as life and light to describe the One who became flesh and lived among us.

Why are there four different gospels? How different are they? Do they contradict one another? Why did God inspire four accounts of Jesus’ story?

Although all four gospels record the life, ministry, death, and resurrection of Jesus, each is distinct, written from the author’s own perspective. Each author is writing to a specific audience for a specific purpose. From the pages of each gospel emerge a unique, but complementary, portrait of Jesus Christ.

Matthew presents Jesus as the Messiah to his Jewish audience. Mark presents a call to discipleship where Jesus is Lord desiring a fruitful, right relationship and proper worship from His people. Luke emphasizes Jesus as teacher and seeks to make the Gentiles certain of the things that Jesus has taught. But John’s purpose in writing is clearly defined by John himself—Jesus is the Christ, the Son of God, and the source of eternal life.

And truly Jesus did many other signs in the presence of His disciples, which are not written in this book; but these are written that you may believe that Jesus is the Christ, the Son of God, and that believing you may have life in His name. (John 20:30-31)

John begins by stating and developing the “thesis” that he will defend as he tells Jesus’ story. He describes the nature and character of Jesus, boldly declaring who this Person is. And while he recounts the earthly ministry of Jesus, John does not focus on His humanity, as the other gospel writers do, but rather on His deity.

In the beginning was the Word, and the Word was with God, and the Word was God. He was in the beginning with God. All things were made through Him, and without Him nothing was made that was made. In Him was life, and the life was the light of men. And the light shines in the darkness, and the darkness did not comprehend it. There was a man sent from God, whose name was John. This man came for a witness, to bear witness of the Light, that all through him might believe. (John 1:1-7)

John systematically builds a clear and compelling case for the nature and character of Jesus in the first chapter of the gospel of John.

Rather than giving a detailed account of the birth of Jesus, John, in his own style, writes an explicit description of who Jesus is. Did you notice, too, that John actually does include the essence of the Christmas story in his introduction?

Jesus, the Creator, stooped to enter His creation. In the first twelve chapters of John’s gospel, we read the story of Jesus’ earthly ministry, but with a primary focus on His deity and the reason why Jesus became flesh and dwelt among us.

The power and purposes of Jesus the Creator become evident as John describes His earthly ministry, particularly as he details the many miracles Jesus performed. John himself declared, “There are also many other things that Jesus did, which if they were written one by one, I suppose that even the world itself could not contain the books that would be written” (John 21:25).

Just how many miracles did Jesus perform while on earth? So many that no one but God knows. However, John chose to record just seven miracles to make his case for Jesus, the Son of God.

John’s selection of these miracles is intentional. To validate the message of Jesus, John purposefully and strategically records (under inspiration of the Holy Spirit) these seven specific “signs” or miracles. They are unique in emphasis and in message. And these are creation miracles—ex nihilo (“from nothing”) miracles—extraordinary supernatural demonstrations that validate Jesus’ role as Creator. They give testimony to Jesus’ identity as the Son of God, the Messiah, the source of eternal life, the Savior and the Creator (John 1:1-3). All seven of these supernatural creation events—creating something from nothing—were accomplished merely by the thought or command of the Creator. 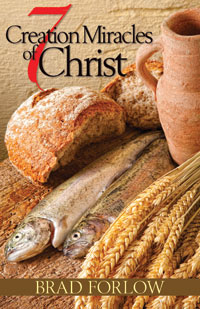 The 7 Creation Miracles of Christ will present how each creation miracle highlighted in John’s gospel demonstrates Jesus’ authority over all of creation (the physical, chemical, material, and natural universe), His power over life and death as the Son of God, and the spiritual truths taught through His encounter with human need that can and should impact our lives today.

Adapted from 7 Creation Miracles of Christ, by Brad Forlow, Ph.D.

* Dr. Forlow is Associate Science Editor at the Institute for Creation Research.