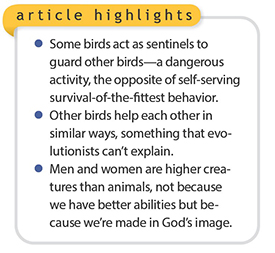 Why are evolutionists surprised to learn that birds are intelligent, careful, and very caring? Birds communicate among themselves, use tools, and often demonstrate altruism (unselfishly caring for others)—sometimes risking their own welfare to care for a neighbor in need.1 Yet, if evolutionists would take Scripture seriously, especially Genesis, they would not be surprised, because Christ bioengineered bird kinds with built-in traits designed to fit them for population success.1

Accordingly, these evolutionists err because they have the wrong biological theory of bird behaviors. They fail to recognize God’s Genesis mandate-purposed designs (including continuous environmental tracking systems)2 that predispose bird populations toward successful “filling” of various post-Flood environments (Genesis 9:1-7).

Consider, for example, how caring birds—such as the African savannah thrush called the southern pied babbler (Turdoides bicolor)—altruistically serve as risk-taking sentinels, willingly endangering themselves to protect their friends and families.

We found that [Turdoides bicolor] sentinel behaviour was costly because (a) sentinels were targeted by predators more often, (b) they were further [sic] from cover than foragers, and (c) they took longer to reach the safety of cover following a predator alarm.…These results suggest that individuals do not become sentinels because it is safer. This is the first study to demonstrate that sentinels are at greater risk of predator attack than foraging group members.3

Likewise, consider how some corvids—such as America’s scrub jay, Eurasia’s Siberian jay, and the Australian magpie—rescue other birds from predators or from “ankle bracelet”-like GPS monitors.

Here, we describe one such study trialling [i.e., trial-experimenting] a novel harness design for GPS tracking devices on Australian Magpies Gymnorhina tibicen. Despite previous testing demonstrating the strength and durability of the harness, devices were removed within minutes to hours of initial fitting. Notably, removal was observed to involve one bird snapping another bird’s harness at the only weak point, such that the tracker was released.4

Yet, as creatures go, mankind is qualitatively higher than other life forms, such as birds.6 Specifically, the greatest qualitative difference is that humans—male and female (starting with Adam and Eve)—are God’s favorites, uniquely created in God’s own image.6

Thankfully, as God’s most-favored creatures, we humans can individually receive personal redemption and eternal life (John 3:16), with everlasting gratefulness unto Christ our Creator-Redeemer.