Ice Cores, Seafloor Sediments, and the Age of the Earth, Part 3 | The Institute for Creation Research
Skip to main content


The two previous articles in this series demonstrated problems with the old-earth timescales that secular scientists have assigned to deep seafloor sediments and ice cores.1,2 This article presents a positive argument for the youthfulness of the seafloor sediments—an argument that has ominous implications for the vast ages assigned to the high-latitude ice sheets.

At today’s “slow and gradual” rates, it can take a thousand years for just a couple of centimeters of sediment to be deposited on the ocean floor. Because these sediment layers can be many hundreds of meters thick, and because it’s assumed that sedimentation rates have always been slow, secular scientists believe the sediment deposition required many millions of years.

Secular scientists assign ages to these layers by using the astronomical or Milankovitch hypothesis of ice ages to interpret chemical clues within the seafloor sediments. This theory simply accepts as a given the idea of “deep time”—millions of years. A previous article discussed some of the problems with the Milankovitch hypothesis.1

Although creation scientists reject the millions of years that secular scientists have assigned to the seafloor sediments, they do agree that their deposition has been slow and gradual for at least the last few thousand years. But even a few thousand years of slow deposition could only account for a tiny fraction of the total sediments on the ocean floor. How, then, can creation scientists explain the great thickness of these sediments? Objects called manganese nodules found on the floors of the Pacific, Atlantic, and Indian Oceans provide a significant clue. 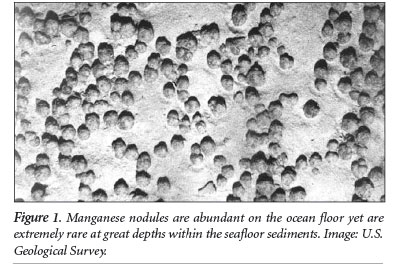 Manganese nodules are typically potato-size concretions found scattered on the ocean floor (Figure 1). Composed of manganese and other metals such as iron, nickel, and copper, these nodules form as a result of the accumulation of chemicals onto a nucleus. These chemicals originate in seawater or within water trapped between the sediment grains below the sea floor. In both cases, the end result is the formation of metallic pellets near the surface of the ocean floor. Manganese and iron extruded from underwater volcanoes can also contribute to nodule growth, as can the presence of algae and bacteria.3,4 Nodule growth is thought to cease once the nodules become buried beneath more than a few centimeters of sediment.5,6 Based on radioisotope dating methods, secular scientists estimate that these nodules typically grow at the exceptionally slow rate of only a few millimeters per million years.3

Manganese nodules puzzle secular scientists because most are found in just the uppermost 50 centimeters (~20 inches) of sediment, although some are found at greater depths.3,5,6

Why are nodules generally missing from the deeper seafloor sediments? If the present really is the “key to the past,” one would expect nodules to be found at all depths within the seafloor sediments. After surveying manganese nodule data from the Deep Sea Drilling Project, one secular geologist observed, “The major question arising from this survey is why nodules occur in such paucity at depth in the sediment column.”5

Some scientists have speculated that this scarcity of deep nodules can be explained by chemical dissolution of the nodules after burial. However, this proposal is problematic for at least two reasons. First, some nodules have been found at great depths, although this is relatively rare.5 Second, buried nodules do not exhibit any clear trends in chemical composition with depth, as one might expect if they were in various stages of dissolving, suggesting that “buried nodules neither grow nor dissolve after their burial in the sediment column.”6

But if nodules don’t dissolve after burial, then their absence in the deep sediments implies that nodules simply were not being formed when the deeper sediments were deposited. Secular scientists have suggested possible explanations for this,5 but these proposals tacitly acknowledge that past conditions were significantly different than those of today, and this violates uniformitarian assumptions. In the case of manganese nodules, the present is definitely not “the key to the past”! 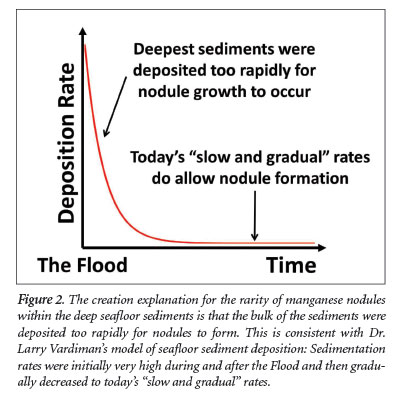 Creation scientists have an extremely straightforward and logical explanation for the rarity of manganese nodules within the deep seafloor sediments: Since nodule growth is apparently possible only at the surface or below a shallow layer of sediment, the absence of nodules in the deeper sediments implies that these deeper sediments were simply deposited too rapidly for nodules to form and grow.7 This is consistent with the proposal of creation scientist Dr. Larry Vardiman that the deposition of seafloor sediments was initially very rapid during and shortly after the Genesis Flood but then decreased to the slow and gradual rates we observe today (Figure 2).8

This argument is strengthened by the fact that secular scientists seem to have seriously underestimated the true rates of nodule growth. Although growth rates can vary considerably due to a number of factors, nodules have consistently been observed growing at rates hundreds of thousands of times faster than the slow rates calculated from radioisotope dating methods.4,9,10 This implies that deposition of the deeper sediments would had to have been even more rapid in order to prevent the formation of nodules at these faster growth rates. Moreover, this glaring discrepancy between the calculated and observed rates of nodule growth is just one more indication that there are serious problems inherent in radioisotope dating methods.11 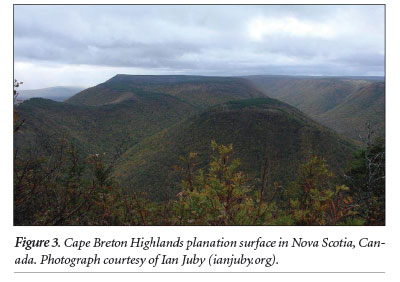 If most of the seafloor sediments were rapidly dumped into the ocean basins, then one might expect additional geological clues to fit this interpretation of the data. Is this the case?

Across every continent, we observe flat or nearly flat erosional surfaces that extend for many miles. These erosional plains are known as planation surfaces (Figure 3).12

Each planation surface marks a very specific event in time and therefore allows insight into the geological history of that area. These surfaces are especially important since they are observed on a global scale. The deepest global planation surface is called the Great Unconformity.

In many places around the world, the Great Unconformity resides at the Cambrian-Precambrian boundary. Uniformitarians believe this surface, and others like it, formed as the sea level slowly rose, invading (transgressing) the land and forming a broad zone of coastal erosion. Their explanation for the formation of this global surface is problematic and falls outside traditional uniformitarian thought.13

Secular geologists have identified at least five other global planation surfaces that were supposedly formed as oceans slowly flooded the continents and later drained off in cyclic succession. Secular scientists believe these planation surfaces define the tops and bottoms of what are termed megasequences. The Great Unconformity is, in fact, the base of the first of these megasequences, known as the Sauk sequence. The upper erosional boundaries of each megasequence are believed to have been created as each new megasequence, during its deposition, eroded the top of the previous sequence. These megasequence-bounding erosional surfaces, like the Great Unconformity, have been traced across the globe and yet the mechanism of their formation continues to perplex secular scientists.12 This is because modern erosion creates V-shape stream channels across all exposed land; it does not create planar surfaces. So if no modern geologic process can account for the creation of flat planation surfaces, then how did they form?

Source of the Sediment: The Genesis Flood

The answer requires a unique global erosional event: the Genesis Flood. At the start of the Flood, we would expect the formation of a vast erosional plain like the Great Unconformity as immense tsunami-like waves swept across the continents, stripping away soil in a matter of hours or days.

As the Flood progressed, the water oscillated, retreated, and advanced in cycles, resulting in the formation of additional megasequences and their associated planation surfaces. Thus, these erosional episodes (planation surfaces) between megasequences do not represent millions of years but merely brief hiatuses as the floodwaters surged.

At the end of the Flood, the newly formed ocean crust cooled and subsided, deepening the ocean basins and lowering sea levels worldwide. This caused the floodwaters to recede on a vast scale, likely as massive sheets of rapidly moving water drained off the continents.14 “And the waters receded continually from the earth. At the end of the hundred and fifty days the water decreased” (Genesis 8:3).

It should also be noted that the warm, mineral-rich oceans during and after the Flood would also have greatly stimulated the growth of phytoplankton, likely resulting in many algal blooms. Since zooplankton (such as foraminifera and diatoms) can feed on phytoplankton, it’s likely that they too greatly increased in number, and their abundant remains would also have contributed to the accumulating sediments during the post-Flood period.15

Implications for the Seafloor Sediment and Ice Cores

Hence, the Bible’s true history of a global flood and a young earth enables us to make far better sense of the seafloor sediment and erosional data than can uniformitarian, old-Earth assumptions and speculations. The evidence points to a young earth!