An international research team claims to have found the world's oldest big cat fossil in Tibet, publishing their findings in the Proceedings of the Royal Society B.1 Big cats include lions, tigers, jaguars, and even snow leopards from Asia. The team dated several snow leopard-like partial fossils at between 4.1 and 5.95 million years old and a complete skull at around 4.4 million years. But how did the authors obtain these large numbers?

"The fragments were dated using magnetostratigraphy - which relies on historical reversals in the Earth's magnetic field recorded in layers of rock," according to BBC News.2 The method makes use of tiny minerals, in layered sediments for example, that align with Earth's magnetic field just before hardening into rock, showing that magnetic reversals really happened. But when in history did these reversals occur? Researchers must make assumptions before answering that question.

Experts tie each magnetic reversal to a historical era named on a geologic chart already showing millions of years.

In this case, the big cat fossil team cited recent research published in Palaeogeography, Palaeoclimatology, Palaeoecology (P3).3 The P3 authors aligned certain sedimentary layers from the Tibetan Plateau—including those within which the big cat fossils were found—to age designations noted on a generally accepted version of the geologic chart called the Geomagnetic Polarity Time Scale (GPTS). However, there may be almost as many versions of the GPTS as there are researchers who try to construct them.4

With the GPTS under constant revision, how can researchers be sure that it is historically accurate? 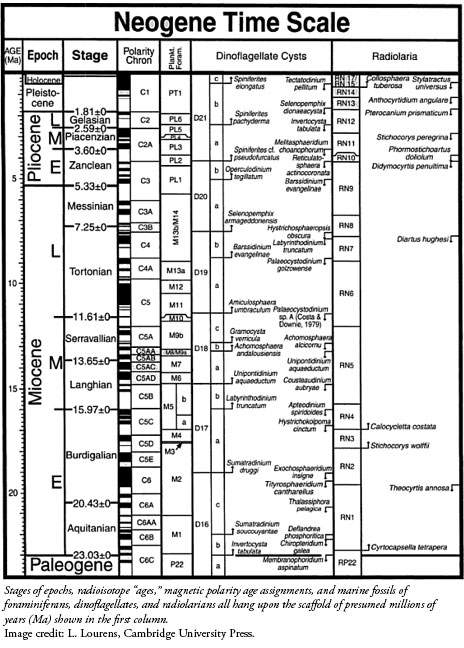 The P3 study relied on a GPTS printed in a technical book titled A Geologic Time Scale 2004. It shows a "Neogene Time Scale" on page 423, with geomagnetic polarity reversals under the heading "Polarity Chron." It also pins fossil-bearing layers to geologic ages, a process called biostratigraphy.5

When available, secular researchers use radioisotope dating to pin certain magnetic or fossil layers to the geologic time scale, so both methods rely on the same isotope "ages." One problem with this approach is that the most often used argon-based isotope methods yield excessively old ages for samples known to be much younger.6

In short, these supposedly separate dating methods both rest upon a third, disproven method! Was the Tibetan big cat fossil stash really millions of years old? Those who use these dating techniques ignore that the technology used to arrive at these dates has been falsified, and they ignore historical accounts of creation and the Flood.

Perhaps the best information available about the past is a soberly written account of the world's earliest events, which is not subject to constant revision—the book of Genesis.