A mixture of sorrow and thankfulness comes over the Institute for Creation Research family as we note the passing of Dr. Duane Gish on March 6, 2013. Dr. Gish has been a champion of creation at ICR for decades, and we will miss him.

Born in Kansas and educated at University of California, Los Angeles, he later received his Ph.D. at UC Berkeley. He joined the ICR faculty in 1970, after a fruitful career in biochemistry at the Upjohn Company in Michigan. Soon after the publication of The Genesis Flood in 1961, he joined with other creation-minded scientists to found the Creation Research Society in 1963 and served on their governing board until 1997. As his opportunities for creation ministry grew, he joined Dr. Henry Morris at the newly formed Institute for Creation Research. This was a true step of faith as he left a secure, well-paying position for a very uncertain future. But God blessed both his faith and his efforts. 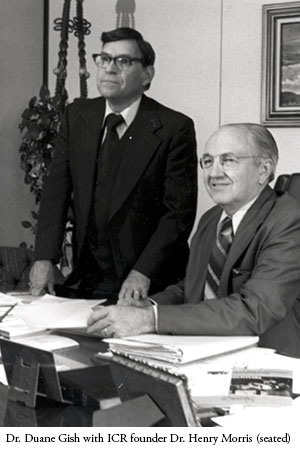 At the time, there were no such ministries and no clear path to follow. Dr. Gish shouldered the daunting burden of speaking to any audience about the evidence for creation. He especially found his own ministry niche on the college campus, where evolution was thoroughly entrenched. His expertise equipped him to speak on origin of life subjects, enriched with his personal laboratory experiences. He had worked and published with recognized experts in the field, and his voluminous knowledge of the subject served him well.

In those early days, evolutionists were caught somewhat by surprise when a qualified speaker challenged their worldview, complete with a working knowledge of the relevant literature and research.

Soon the lectures turned into debate opportunities, and Dr. Gish rose to the occasion. Over the years, he participated in over 300 formal debates, and by all accounts he won them all. Soon spokespersons for evolution were publicly recommending that evolutionists not debate Duane Gish, because they would surely lose. He never enjoyed the confrontations, but he relished the chance to present creation's evidences.

The debates and campus lectures were always billed as a scientific—not religious—comparison of the evidence for and against evolution. His opponents many times tried to discredit him as a scientist by branding him as a Bible-believer. He never denied his Christianity, but scrupulously stuck to the scientific evidence, never bringing up the Bible. No doubt, audiences knew where he was coming from, and in the process of presenting truth unapologetically, he gave a good testimony. Josh McDowell claimed ICR's work was "the cutting edge of evangelism." Christian campus groups reported a great harvest of souls following the debates.

His lectures most often began with an explanation of the nature of science, and how any discussion of origins involved speculation about the unobserved past. He would then present a study of the record of life in the past as seen in the fossil record. He concluded with the laws of science, saying they precluded any self-transformation of organisms from simple to more complex forms. Depending on the time and interest, Dr. Gish would follow the lecture with sections on origin of life experiments or dinosaurs. Perhaps he shone the best during question and answer sessions, because his encyclopedic knowledge and winsome way often won over the most aloof audience and sometimes even disarmed his most avid opponents.

The subject of fossils proved the most valuable anti-evolution subject, and before long his debate lecture developed into a book, Evolution? The Fossils Say NO! Years later, after many printings and updates, the book was reissued as Evolution? The Fossils Still Say NO! This was a strong foundation on which the rest of creation thinking was built. He also authored other books, including A Creation Scientist Answers His Critics, Evidence Against Evolution, Dinosaurs: Those Terrible Lizards, and Dinosaurs by Design.

Dr. Gish had an eternal impact, and the entire creation ministry will miss him, especially his ICR family. He leaves a wife, Lolly, four children by his deceased first wife (also named Lolly), nine grandchildren, three great-grandchildren, and hundreds of thousands of intellectual "children" who are advocates of biblical and scientific creation. He was not a large man, but stood as a giant in defense of scriptural authority. Well done, Dr. Duane Gish. Well done.