Schoolchildren know the names of some chemicals essential to the life of a cell, like DNA or protein. Older students learn why they are essential, like that DNA holds critical information that codes for the cell's proteins as words do in an instruction manual. Proteins provide critical function and structure like the various appliances and wood framing in a house. But most people have not heard of recently characterized biochemicals known as piRNAs. 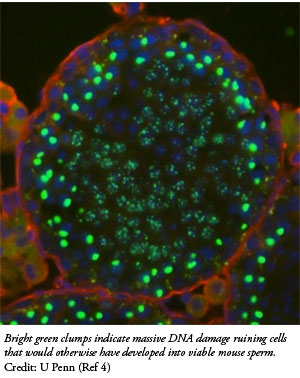 The piRNAs form complexes with small proteins. Together, they play a variety of key regulatory roles in the genome.1 A recent report has examined the ways in which piRNAs interact with other proteins and DNA inside mouse reproductive cells. A pair of researchers from the University of Pennsylvania made several interesting discoveries, publishing their results in the online journal PLoS Genetics.2 But perhaps their most important finding was that without piRNAs, mouse sperm cells failed to mature.

"PiRNA" is an abbreviation of "piwi-interacting RNAs." Piwis are small proteins that, when joined with the short RNAs, attach to DNA and prevent transposon activity and regulate the activity of certain types of genes. In other words, they regulate cell processes by suppressing the cellular machinery that cuts and splices DNA inside the developing reproductive cell. PiRNAs are the most abundant type of small non-coding RNAs in animal cells.3,4

Mouse sperm cell production stops without piRNAs. The University of Pennsylvania researchers found this out by visualizing the scrambled DNA in such cells. The barrage of mutations occurred after the cells had undergone meiosis—reproductive cell division. The study authors do not yet understand how the presence of piRNAs prevents wanton mutation, only that it does.

Co-author Jeremy Wang said in a university press release, "This is the first time we've shown that pachtyene piRNA is required for maintaining genome integrity in the post-meiotic germ cells."4 The upshot is that without piRNAs, mice would die in one generation.

And not only do the cells need piRNAs, but this research discovered that the enzyme MOV10L1 acts as a "master regulator" of piRNAs.

These discoveries present a significant conundrum for evolutionary origins. They demonstrate another vital role for certain "non-coding" DNA—which actually do "code" for piRNAs, though not for protein. Thus, these results reiterate that even DNA sequences that do not code for protein are still vital. How can natural processes generate new DNA code if almost all of that coded genome is required to be fully programmed up-front?

Without DNA, protein, and—from what we now know—without piRNA and MOV10L1 either, there would be no next generation of animals. And evolution needs countless generations for it to work the way that its proponents describe it.

The biochemical evidence perfectly fits the idea that the entire apparatus for building a new generation of creature from raw ingredients was expertly designed in mice as well as every other creature. It makes sense to think that a Creator tailored all the right biochemical pieces in just the right patterns. After all, every required piece of this apparatus had to have been properly arranged all at once, even as they are in living mice.