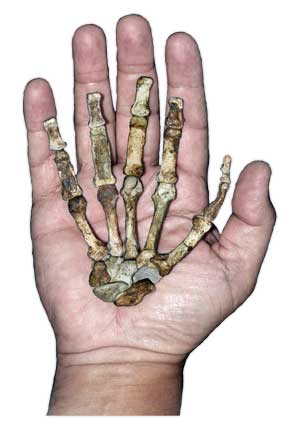 Widespread news reports recently proclaimed that a collection of primate fossils discovered in a collapsed cave in South Africa just might be an evolutionary “game changer.” ABC News reported that this creature, called Australopithecus sediba, “could be a key link in the process of evolution that led to modern human beings.”1 One headline read, “Rethinking Human Origins: Fossils Reveal a New Ancestor on the Family Tree.”2 But none of these claims is true, and it’s relatively easy to understand why.

If this fossil is a real “game changer,” then it should clearly demonstrate human evolution. Otherwise, it’s just an extinct kind of ape. It should show transitional features, such as bones and body proportions that are on their way to becoming shaped like a human’s. It should also be found in earth layers that are significantly below, and that therefore pre-date, evidence of humans. Does this new fossil meet either expectation?

Five technical papers in the September 8, 2011, issue of the journal Science offered analyses of the various Australopithecus sediba bone fossils. In one, researchers explained why they believe that the fossils’ age assignment makes them valid candidates for pre-human ancestors.3

The study authors argued that the “Sediba” fossils are almost exactly 1.977 million years old. They then asserted that no Homo—the scientific name for human—fossil remains are any older than 1.9 million years, so that Sediba supposedly existed 77,000 years before humans. They reasoned that man therefore could have evolved from Sediba or a Sediba-like creature.

But genuine human remains have been discovered in earth layers below, and thus were deposited before, Sediba fossils. These must be ignored for Sediba to possibly be an evolutionary precursor of humans, because descendants cannot pre-date their ancestors.

But there is more evidence of humans before Sediba. In agreement with the original assessment published in Science in 1980, two recent analyses concluded that the famous Laetoli footprints in Tanzanian volcanic mud were made by feet that were essentially identical to those of humans.5,6 The tracks were tacked onto the evolutionary timeline at 3.7 million years ago—long before Sediba—but despite their foot shape, the tracks were assigned to extinct apes!

A human foot bone fossil—the fourth metatarsal—was recently found in Ethiopia among an assemblage of hundreds of unattached bones and assigned an age of three million years. Researchers, also publishing in Science, compared it with those of the modern human, chimpanzee, and gorilla.7 Though their analysis rigorously demonstrated that it perfectly matched a human’s and was totally unlike the apes’, they claimed it was the foot bone of an extinct ape.8 Was this because it did not match the evolutionists’ consensus time of man’s supposed “emergence” at 1.9 million years?

And what about the evolutionary dating of “the first appearance of stone tools at 2.6 million years ago” that the Sediba authors acknowledged?9 As far as is known, only people make stone tools. And as described below, Sediba’s hands were not fit for tool-making.

How did the authors promoting Sediba as a “game changer” deal with these human bones, human foot tracks, and human tools, all deposited before Sediba? They simply dismissed them by saying “their age is uncertain.”3 They must say this in order to isolate Sediba’s candidacy as a pre-human ancestor from the fossil facts.

The many pre-Sediba Homo remains are the real “game changers.”

Even if the human bones, tracks, and artifacts that predate Sediba were somehow not from Homo, what is the feasibility that a creature like Sediba could have evolved into a human in 77,000 years? According to the researchers, morphing Sediba into Homo would require refashioning at least these features:

All those precise alterations by randomly occurring natural forces in only 77,000 years?

Such drastic changes are not only impossible over such a relatively short time, but no amount of time would be sufficient for natural forces to transform one fully formed, well-fitted ape creature into a human because nature alone cannot and does not build complicated machinery. According to observable science, the ravages of time don’t construct, they deconstruct.10

Pre-Sediba human remains must be ignored to maintain this fossil’s “game changer” status. However, did Sediba at least have transitional features, such as a part-ape, part-human hand?

One of the Science reports examined the features of each bone in the wrist and hand from what appears to have been an adult female of this extinct ape kind. The unique hand doesn’t look like a modern ape’s, a modern human’s, or any kind of gradual transition between the two. The researchers wrote that it had a “mosaic” of features.9

Its finger bones were long, curved, and—“together with its primitive australopith-like upper limb”—demonstrate that this small primate was fitted for swinging through trees.9 Human finger bones are straight.

Also, Sediba’s thumb was long and skinny. A human thumb is proportioned to bear “large loads during stone tool production.” So Sediba’s thumb probably “was not subject to the same type or frequency of loading as that of other contemporary or later hominins.”9 Thus, it could swing from tree branches and probably could not make tools out of hard stone.

The study authors concluded that the uniqueness of Sediba’s hand “adds to the range of morphological [shape] variation previously documented in the hominin carpometacarpal [wrist] joints and to the ambiguity surrounding the polarity and functional significance of some of these features.”9

“Functional significance” refers to the fossil hand’s potential to make tools. As far as is known, only the human hand, integrated with human muscles, nerves, and mental processes, has this capability.11

So, if Science says that this fossil adds “ambiguity”—a synonym for “uncertainty”—then how can media reports justify the claim that it “reveals a new ancestor”? When it comes to human evolution, headlines don’t match reality. For example, the fossil nicknamed “Ida” was promoted as the “missing link” in 2009, but almost immediately was debunked as an extinct variety of lemur with no evolutionary significance whatsoever.12

Preliminary reports of these same Australopithecus sediba fossils made similar claims of possible human ancestry. But it was quickly seen as “not a missing link.”13 These new Sediba fossil descriptions confirm that it is still “not a missing link.” Rather than showing any transitional features between ape and man, its anatomy, including its hand, was a mosaic of well-matched features that were fitted together as though specially created.

Australopithecus sediba had a unique and separate suite of physical and therefore genetic characteristics. It was not a transition toward man, but an extinct ape kind. It is not an evolutionary game changer, but the hype surrounding it shows that the game of promoting human evolution with premature and misleading headlines has not changed at all.