Having always been intrigued by historical geology with its eras of hundreds of millions of years, I was interested to know to what extent it could be, and has been, tested by experiment. Some years ago, I renewed my studies on the subject, paying particular attention to the principles of stratigraphy which are used to obtain a relative chronology from superposition of strata.

First some definitions. A stratum is a single layer of homogeneous or gradational lithology deposited parallel to the original dip of the formation. It is separated from adjacent strata or cross-strata by surfaces of erosion, non-deposition, or abrupt change in character. The term stratum includes "bed" and "lamination" which strata vary in thickness from less than a millimeter for micro-strata or laminae to more than a meter. A stratum often shows evidence of sorting of the particles of which it is composed, with the size decreasing from bottom to top of the stratum.

A facies is a recognizable series of superposed strata.

Superposed strata and, on a larger scale, superposed facies, are considered as successive layers or isochronously-deposited sediments. That is to say, the lower one formed first, the one above it second, and so on. The principles of stratigraphy arose from this belief of strata and facies being successive layers.

In 1667, Nicholas Steno, a naturalist from Tuscany, wrote in his book, Canis Carchariae, that "the layers of subsoil are strata of ancient successive sediments." From this assertion he deduced the principles of stratigraphy defined in his 1669 book, Prodromus. These include:

A. The principle of superposition:

B. The principle of initial horizontality:

C. The principle of strata continuity:

"Material forming any stratum were continuous over the surface of the Earth unless some other solid bodies stood in the way."

Implication of these definitions

De Luc, at the beginning of the nineteenth century, and later Brongniart, considered that if the principle of superposition indicated a time sequence, the difference in fossil content in superposed strata would show a change of species in time. Subsequently, the presence of index fossils in superposed strata was used as evidence of a succession of time periods. Later, these principles of stratigraphy and biostratigraphy provided the basis upon which nineteenth century geologists established the geological column.

At the end of the nineteenth century, Johannes Walther1 studied the formation of contemporaneous sedimentary deposits in a delta which prograded, or developed from the coast towards the open sea. He observed the same succession of facies from the surface downwards, as from the coast towards the sea. This was clear evidence that facies in sequences, when superposed and juxtaposed at the same time, do not always follow the principles of superposition and continuity.

In the 1970s and 80s, Glomar Challenger borings into the Pacific Ocean bottom showed that Walther's discovery of superposed and juxtaposed facies also applied to deep sea sediments. Walther's observations can in fact be shown to be a natural consequence of sedimentary mechanics.

American geologist Edwin McKee2 reported his observations of sediments deposited in 1965 when Bijou Creek in Colorado overflowed its banks due to 48 hours of torrential rain. The stratified deposits, reaching a thickness of 12 feet, exhibited particle sorting and bedding planes.

Bedding planes are generally interpreted as the result of interruptions in sedimentation, with hardening of the surface of the last-formed layer prior to further sedimentation. It was impossible by simple observation to tell whether the Bijou Creek strata had formed successively one on top of the other or were co-temporaneous. In any case, 48 hours gave no time for the surface of any stratum to harden before subsequent sediment was deposited on top of it. The partings had to be due to some other mechanism.

Searching the geological and sedimentological literature, I was surprised to find that there was little experimental data on the formation of strata. It had apparently been assumed that all strata form in accordance with the principles of stratigraphy. My objective was, therefore, to test by experiment this assumed mechanism for strata building.

Examination of conditions under which strata form

I started by examining how sedimentary particles are deposited in both dry and wet conditions. Sand particles of differing size produced micro-strata or laminae when poured into a flask. The micro-strata formed from the particles of sand sorting themselves out according to size, with the larger particles at the bottom grading up to the smaller ones at the top. The process repeated itself, producing multiple laminae.

This was fundamental because it showed that micro-strata or laminae formed from particle sorting, irrespective of the speed of sedimentation, and not by one layer forming first and then the next one forming on top of it. My results were published by the French Academy of Science,3,4 which encouraged me to continue my experiments, but on a much larger scale.

Experiments in the Colorado State University

Large scale experiments required the resources of a laboratory with the latest technology. Having read their reports on sedimentology, I contacted Colorado State University in the USA. This led to a series of experiments conducted in their modern hydraulics laboratory at Fort Collins. Pierre Julien, a sedimentologist, was in charge of the experiments. They took place in large glass-walled flumes, which allowed observation and filming from above and through the sides of the tanks.

Different sized particles of sand were poured into water circulating in the flume. Variations in current velocity caused the particles to be sorted according to size. At 1 m/s superposed laminae formed laterally in the direction of the current. A reduction of velocity to 0.5 m/s caused larger particles to collect on the previous laminae, always migrating in the direction of the current. An increase in velocity back to 1 m/s caused laminae similar to the previous ones to form, mainly due to friction, on top of the stratum of larger particles. The accumulation of sediment produced a deposit consisting of the downstream part of the lower laminae, part of the sloping stratum of larger particles, and the upstream part of the upper laminae. Each individual deposit formed successively downstream and was therefore younger than the one before it. Variations in current velocity, as found in rivers and oceans, could thus cause deposits to form both vertically and laterally at the same time in the direction of the current.

The flume experiments further demonstrated the mechanical nature of stratification, whereby: (1) Particles segregated according to their size when transported by a current of variable velocity; (2) Desiccation, or drying out, of deposits caused bedding partings; (3) Stratification of the deposit, under both dry and wet conditions, formed parallel to the slope of the deposit, which could exceed 30°.5

It was discovered that where there is a current:

a. Superposed strata do not always result, according to Steno's beliefs, from successive layers of sediment; consequently the principle of superposition does not always apply to strata formed in a current;
b. Stratification formed parallel to a slope exceeding an angle of 30°, can invalidate the principle of original horizontally. Inclined strata are not necessarily, therefore, the result of subsidence or uplift. 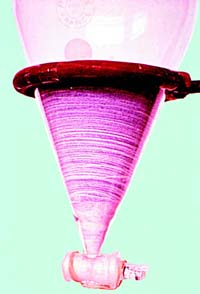 The experiments demonstrated that current deposited strata can form in the same way as sequences of facies. This is consistent with sequence stratigraphy. The experiments show that bedding planes, considered as resulting from interruptions of sedimentation, can result from desiccation of sediments. Moreover, recent submarine observations such as Rubin,6 the flume experiments summarized by Southard,7 and river studies initiated by Hjulström8 and developed by several other scientists, have shown the relationships between contemporaneous hydraulic conditions and sedimentary structures, particularly between critical speed of sedimentation and particular size. Such relationships correspond to those measured in our experiments. These relationships can be used to determine the minimum paleohydraulic conditions (velocity of current, depth of water, discharge and speed of accumulation of sediments) from sedimentary rock structures.

For further study, see the video describing the Berthault and Julien investigation "Experiments in Stratification," 1999.

* Guy Berthault is an independant researcher from France.