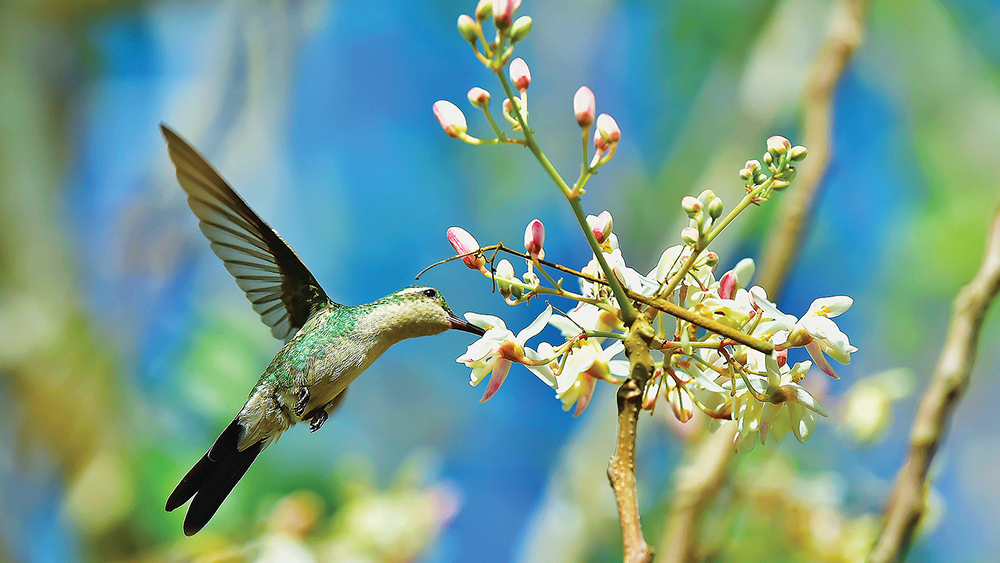 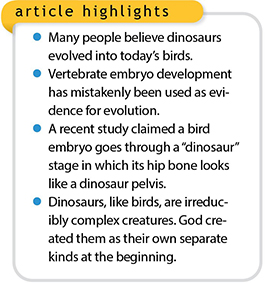 Most zoologists and vertebrate paleontologists have reached an imaginative consensus—birds are actually flying dinosaurs. This belief includes the soaring Andean condors, painted buntings, and even the world’s smallest bird, the bee hummingbird of Cuba. They all supposedly evolved from theropod dinosaurs.

Such an extraordinary evolutionary transformation is clearly a highly subjective interpretation based on an individual’s worldview. Evolutionary researchers with such a worldview are convinced that birds not only descended from dinosaurs, they are dinosaurs. One of their newest arguments for this idea comes from studying the embryology of birds that live on the earth today.

It was recently reported that some scientists could allegedly “see” bird embryos passing through a dinosaur stage during their development.

All baby birds have a moment prior to hatching when their hip bone is a tiny replica of a dinosaur’s pelvis. That’s one of the findings in a new, Yale-led study in the journal Nature that explores the evolutionary underpinnings of the avian hip bone. It is also a modern-day nod to the dramatic transformation that led from dinosaurs to birds over tens of millions of years.1

If this progression sounds familiar, it’s because it harkens back to a failed theory evolutionists used for decades called the biogenetic law, or embryological parallelism, in which a vertebrate embryo goes through supposed evolutionary stages. German zoologist Ernst Haeckel (1834–1919) popularized the idea with the phrase “ontogeny recapitulates phylogeny,” or in simpler terms, the development of the individual repeats evolutionary descent.

For example, folds in the neck (pharyngeal pouches) of the human embryo are said to correspond to the gills in our fishlike ancestor. However, according to two developmental biologists:

Haeckel based his biogenetic law on the flawed premise that evolutionary change occurs primarily by successively adding new features onto the end of an unaltered ancestral ontogeny while condensing the ancestral ontogeny into earlier developmental stages. This notion was based on Lamarck’s concept of the inheritance of acquired characteristics.4

“It was unexpected to find these initial stages of bird development look so much like the hips of an early dinosaur,” said Christopher Griffin, lead author of the Nature study.1 But perhaps what they “see” is actually a flawed interpretation, not unlike the subjectively “flawed premise” upon which Haeckel promoted his biogenetic law.4 Importantly, certain evolutionary biologists today aren’t convinced that heavy-tailed theropod dinosaurs evolved into birds. However, their views aren’t necessarily less problematic.

A university’s educational website stated, “Embryos do reflect the course of evolution, but that course is far more intricate and quirky than Haeckel claimed. Different parts of the same embryo can even evolve in different directions.”5 If this were true, then researchers have overlooked a much larger problem. Each animal—especially the wondrous avian kind—is an irreducibly complex unit of life that’s genetically, biochemically, and functionally programmed to develop from a fertilized egg to a reproductive adult. Different parts of the same embryo could never “evolve” or develop in different directions and still produce the highly unified organisms we marvel at today. We therefore see another layer of doubt added to the idea that bird embryos somehow transition through a dinosaur stage.

God created birds as birds on Day 5 and dinosaurs as dinosaurs on Day 6 of the creation week about 6,000 years ago, just as Genesis says.