We Need You! | The Institute for Creation Research
Skip to main content 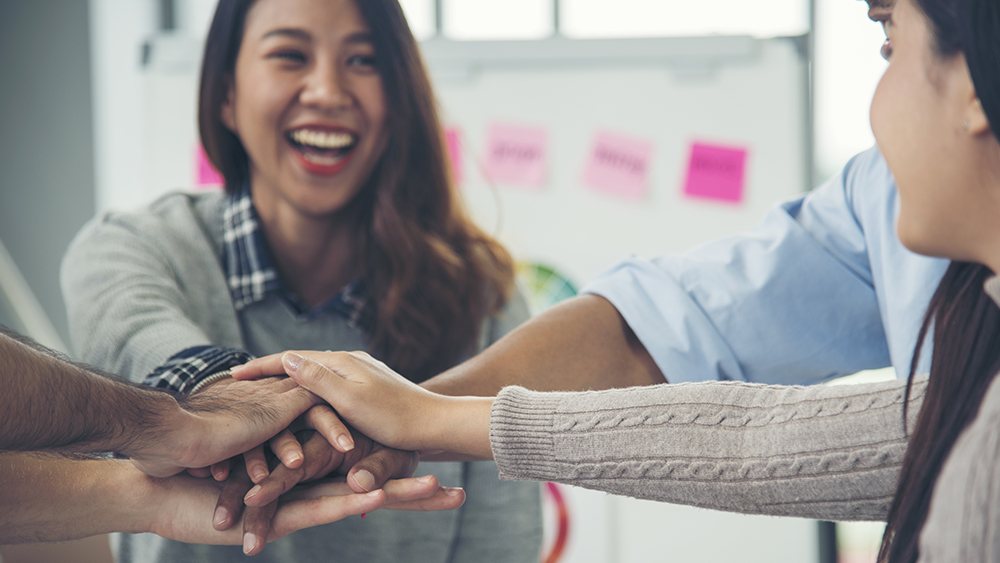 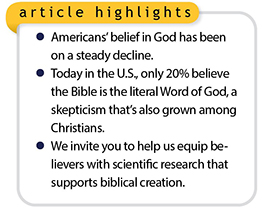 There’s been a steady decrease in the U.S. population’s belief in God. The assessment of our country’s religious views began when Gallup conducted a public opinion poll in 1944. Remarkably, 98% of those polled said they believed in God, a result reflected in polls in 1947 and the 1950s and ’60s. In a 2013 follow-up survey, the percentage dropped 11% to 87%.1

By 2022, the number decreased another 6%, with only 81% of Americans believing in God.1 Not only has the number declined, but belief in the integrity and clarity of the Bible is on the same downhill trajectory in both non-Christian and Christian populations.

A recent Gallup poll revealed that only 20% of Americans believe the Bible is “the literal word of God.” In the same poll, 29% of these folks say that “the Bible is a collection of fables, legends, history and moral precepts recorded by man.” And 58% of Christians were registered as believing “the Bible is the inspired word of God but not everything in it is to be taken literally.”2

How does the church at large view Yahweh’s sacred text? Gallup records that less than 50% of those who identify as “evangelical or born again” are likely to view the Bible as literally true. It’s a wonder these percentages aren’t lower, with many pastors, theologians, and seminary professors campaigning against the clarity of Scripture. One Old Testament professor paints an opaque picture of Genesis by stating:

Opinions like this abound. I’ve read more than 20 recent books written under Christian labels, many of which question portions of Scripture—books the Christian community feeds on to get “biblical” knowledge.

So, what does this have to do with stewardship and the Institute for Creation Research? ICR equips those in their spheres of influence to lead, feed, and defend believers by providing scientific responses to attacks against the authority and accuracy of God’s Word. As the writer of Hebrews states, “For the word of God is quick, and powerful, and sharper than any two-edged sword” (Hebrews 4:12).

ICR research views science through the lens of God’s Word. For example, this issue of Acts & Facts tackles evolutionary myths about dinosaurs, Ice Age models that sync with the Genesis Flood account, and the engineered Venus flytrap that demonstrates the Creator’s purpose, plan, and design. ICR connects people with the truth of Scripture, coupled with the current science of biblical creation.

If you’re an ICR donor, it’s a blessing for us to serve the Lord Jesus Christ with you to bring the truth of biblical creation to a spiritually starving culture. The Lord is working powerfully through your faithful efforts, both in your prayers and your giving. If you’re new to ICR, please prayerfully consider coming alongside us as a co-laborer and donating to empower ICR’s Christ-centered initiatives.

Scientific research requires a substantial investment of time and resources for staffing, investigation, and materials. Our goal is to communicate scientific evidence that affirms the clarity and truthfulness of God’s written Word. Visit ICR.org/donate to see ICR’s online giving options.

* Mr. Morse is Director of Donor Relations at the Institute for Creation Research.