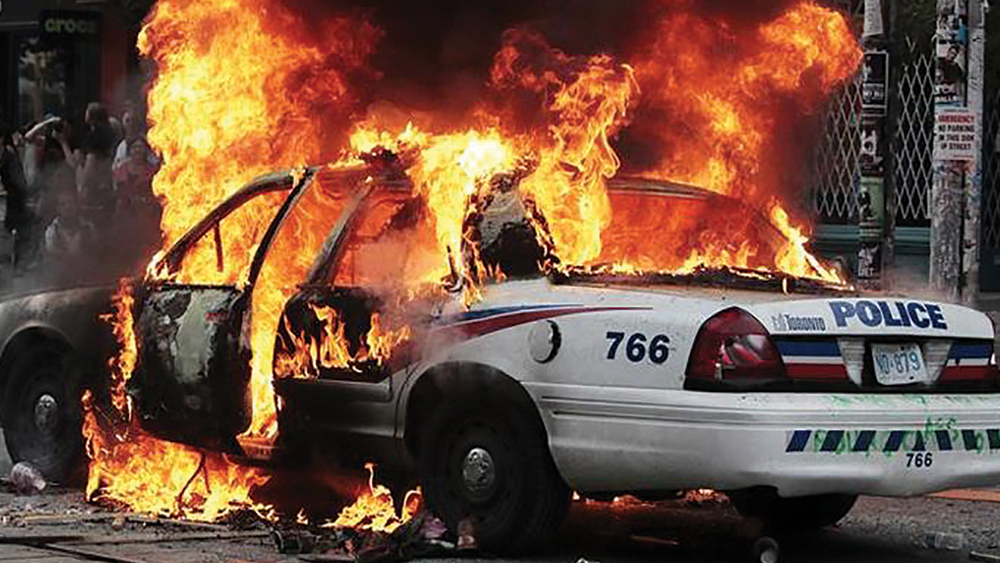 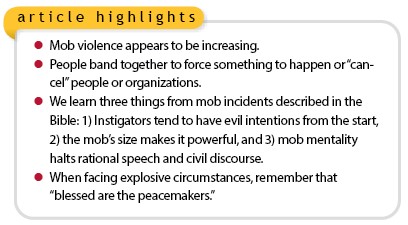 Some scenes from the evening news get etched into our memories. I recall seeing a college professor step outside his building and become suddenly surrounded by a very angry pack of students shouting verbal abuse right into his face. He became trapped in a circle of people who blocked his every move. His prior advocacy of these behaviors ironically didn’t spare him when he transgressed some unwritten code. The mob had come to devour one of their own.

Another time, a senator and his wife’s evening out was cut short when a mob descended on them and harassed them all the way to their car. Even policemen are targets. Angry crowds swarm over their cars, threatening to set them ablaze. And who can forget the truck driver in Los Angeles pulled from his cab in 1992, beaten, and hit in the head with a cinder block?

Mob Mentality and a Cancel Culture

Perhaps one of the most terrifying things a person can imagine is for themselves, and especially their family, to be engulfed by an enraged mob. Today’s technologies can facilitate a mob mentality. A social media message can summon an aggressive pack in what seems like an instant. Alternatively, an online crowd of cyberbullies can gang up on a victim. In many cases, physical violence isn’t necessary as long as the angry throngs are sufficiently vicious with their words.

Nowadays, colleges, businesses, government, and the entertainment industry will “cancel” someone through the growing sinister threat known as cancel culture. What’s entailed in this evil behavior? Cancelers turn a person into a communal pariah by taking steps to terminate their employment, shun them socially, shout them down, distort their legacy, or even go so far as to erase any memory of their existence. A key factor in enforcement is a united angry mob “up in their face” personally or online.

Some of the techniques of cancel culture were refined on creationist forefathers like Drs. Henry M. Morris and Duane Gish. Even now, ICR’s research ministry and speakers are slandered by malicious and personal lies spread via the internet. Unfortunately, even socially or politically conservative observers have largely remained silent when this happens to creationists. And like most untreated diseases, it’s grown worse. Now, everyone is so afraid of either a riot or online mob that our cherished freedom of speech is seriously threatened through self-censorship or social media being shut down.

What can we learn about violent mobs? What do they accomplish? Are there distinguishing characteristics of a mob? The best place for answers is the Bible. Biblical history records our unseen enemy regularly stirring up riots. We can’t study them all, but we can read through some passages to better understand the issue.

After 10 spies brought back a bad report against invading the land promised by God to Israel (Numbers 13:31-33), a mob rose up against Moses. Numbers 14:1-10 records, “So all the congregation lifted up their voices and cried…and all the children of Israel complained against Moses and Aaron.” Stewing over their perceived hopeless future, they sought to depose Moses.

The intensity of wrath became intimidating, and “Moses and Aaron fell on their faces before all…the congregation of the children of Israel.” The crowd reacted to conciliatory efforts by Joshua and Caleb with even greater fury, “and all the congregation said to stone them with stones.” Providentially, at that moment “the glory of the LORD appeared in the tabernacle,” and the riot abruptly ceased.

Hatred Toward the Lord Jesus

An angry crowd was stirred up against the Lord Jesus in Mark 15:8-14. “Then the multitude, crying aloud,” asked Pilate to release Barabbas instead of the Lord. Pilate withstood the demand, “for he knew that the chief priests had handed Him over because of envy. But the chief priests stirred up the crowd, so that he should rather release Barabbas to them.” Yet Pilate further resisted, “so they cried out again, ‘Crucify Him!’ Then Pilate said to them, ‘Why, what evil has He done?’ But they cried out all the more, ‘Crucify Him!’”

Opposition to the Apostle Paul

It seems that mob violence was the weapon of choice to suppress Paul’s gospel message. Acts 14:19 says, “Then Jews from Antioch and Iconium came there; and having persuaded the multitudes, they stoned Paul and dragged him out of the city, supposing him to be dead.” Acts 16:16-22 describes “a certain slave girl possessed with a spirit of divination,” and Paul “said to the spirit, ‘I command you in the name of Jesus Christ to come out of her.’” But those who no longer profited at her expense stirred up a “multitude [that] rose up together against them; and the magistrates tore off their clothes and commanded them to be beaten with rods.”

Then, in Acts 17:5-7 “the Jews who were not persuaded, becoming envious, took some of the evil men from the marketplace, and gathering a mob, set all the city in an uproar and attacked…crying out [that Paul and Silas are] ‘acting contrary to the decrees of Caesar, saying there is another king—Jesus.’” In Acts 18, Paul “was compelled by the Spirit, and testified to the Jews that Jesus is the Christ,” but “the Jews with one accord rose up against Paul and brought him to the judgment seat, saying, ‘This fellow persuades men to worship God contrary to the law.’”

Acts 19 records that after Paul performed numerous Christ-honoring miracles, “many of those who had practiced magic brought their books together and burned them in the sight of all.” Unsurprisingly, an idol maker stirred up a citywide riot in which “they were full of wrath and cried out, saying, ‘Great is Diana of the Ephesians!’” In characteristic fashion, “the whole city was filled with confusion.” They “rushed into the theater with one accord,” whereby “some therefore cried one thing and some another, for the assembly was confused, and most of them did not know why they had come together.” Confusion notwithstanding, the angry crowd seized Paul’s companions.

The Jews from Asia, seeing him in the temple, stirred up the whole crowd and laid hands on him…and all the city was disturbed; and the people ran together, seized Paul, and dragged him out of the temple; and immediately the doors were shut. Now as they were seeking to kill him, news came to the commander of the garrison that all Jerusalem was in an uproar. He immediately took soldiers and centurions, and ran down to them. And when they saw the commander and the soldiers, they stopped beating Paul…and some among the multitude cried one thing and some another. So when he could not ascertain the truth because of the tumult, he commanded [Paul] to be taken into the barracks. When he reached the stairs, he had to be carried by the soldiers because of the violence of the mob.

Placing these Scriptures side by side simplifies finding the patterns of behavior characteristic of mobs. First, we saw their evil provocation. Recall that envy motivated the instigators of mobs against the Lord Jesus and Paul. Envy, lust, and covetousness are closely related passions. This explains why mobs can suddenly explode. Envy readily fuels bitter resentment, outright theft, or envy-driven destruction of coveted property (i.e., “if I can’t have it, neither can you”). Someone compelled by unrestrained envy can spread lying, slanderous reports with the intention of igniting a crowd’s rage.

Next, we see characteristics of why any kind of mob—in person or online—is terrifying. The swarm effect swiftly overwhelms the prey. The Bible reveals that there’s a pool of confused, readily enraged people who are inclined to riot. Social media enables summoning a flash mob at will. Behaviors are so unpredictable amidst the commotion that they quickly devolve into anarchy. It’s hopeless to reason with an irrational crowd bent on expressing their fury. Sheer numbers make self-defense impossible and leave no avenue of escape. Angry mobs possess a bloodlust that’s implacable. An appeal for mercy from the victim only fuels the mob’s feeding frenzy.

Finally, we see how a riotous crowd instantly stops rational speech. Truthful or unfavorable messages immediately drown in the tumult. What an effective tactic this is for those who don’t want their beliefs challenged or positions scrutinized. Similarly, we’ve seen the academic community allow masses of students to shout down, shove, and pelt speakers with objects rather than encourage them to engage in logical discussion. Given the power in the gospel and the creation message to topple false beliefs, it’s no wonder they’re often met with hostile anger versus rational dialogue.

The Bible clearly addresses this diabolical tool that’s extraordinarily effective in fanning rebellion, inflaming hatred, and suppressing truth. Little wonder, then, that we see malicious people on the street or online trying to stir up an angry following. Should we be surprised to see people wield this intimidating weapon when they want to “cancel” someone?

Mob violence is rightly upsetting and must be opposed. Some have called for retribution by “canceling the cancelers.” We at ICR disagree and celebrate freedom of speech. When facing potentially explosive circumstances, ICR’s approach is guided by “blessed are the peacemakers” (Matthew 5:9).

For example, when we speak at public universities, some attendees try to deflect attention from our message by looking for a pretext to instigate a heated exchange through incendiary behaviors or questions. Admittedly, it’s tough to not take the bait. But with Christ’s enablement, we’ll keep true to our message while endeavoring to avoid saying provocative words, try to overcome evil with good, and, as much as we can, keep the peace.

* Dr. Guliuzza is President of the Institute for Creation Research. He earned his Doctorate of Medicine from the University of Minnesota, his Master of Public Health from Harvard University, and served in the U.S. Air Force as 28th Bomb Wing Flight Surgeon and Chief of Aerospace Medicine. Dr. Guliuzza is also a registered Professional Engineer and holds a B.A. in theology from Moody Bible Institute.