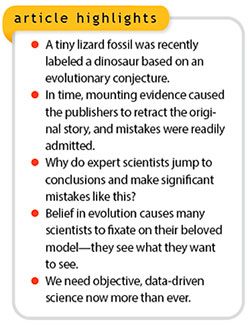 Many of the world’s top paleontologists were again recently fooled by their own preconceived ideas. This time it was a tiny skull trapped in amber that was declared a hummingbird-size dinosaur and named Oculudentavis.1 The initial report was published as the cover story in Nature in March 2020. However, nearly as soon as it was published, a second paper was submitted to Nature showing that the fossil was a lizard and not a dinosaur.2 Nature’s editors promptly rejected the rebuttal.2 The authors of the refuting article had to publish their paper in a Chinese journal instead.3

Then, in July 2020, Nature did retract the original paper. They explained that a new specimen of Oculudentavis showed they were mistaken.4 Others have come forth with the same conclusion.5 The so-called “tiniest dinosaur” was labeled a lizard after all.

A recent paper published in Current Biology tried to rationalize that the earlier misidentification was due to distortions of the skull during fossilization.6

Alan Feduccia, emeritus professor at the University of North Carolina and a paleornithologist, noticed the red flags associated with the dinosaur interpretation right away.2 Feduccia said the bony rings of the eyes in the original specimen (sclerotic ossicles) easily identified it as a lizard.2

This wasn’t the first time a big blunder was made in paleontology. In 1999, National Geographic published the discovery of Archaeoraptor. It was supposed to be a transitional fossil between birds and dinosaurs. But it turned out to be a hoax. The specimen was a bird fossil glued to a dinosaur fossil. And yet, it fooled many prominent paleontologists until it was exposed as a fraud. National Geographic published a retraction the following year.

How can esteemed scientists make such mistakes? And why didn’t the peer review process pick up on the mistakes? Alan Feduccia explains:

In the case of “tiny dino,” the red flags were waving, but the Nature paper went to press. There was no retraction [immediately] by Nature’s editors, who were made aware of the issue, and the authors offered no correction. The problem began not only with the authors, but also with editor Henry Gee, who processed the paper and has been publishing highly conjectural articles for decades on the dinosaur-bird nexus, many incapable of withstanding careful scrutiny.7

In other words, belief in dinosaur-bird evolution blinded them to reality. There never was an Archaeoraptor, and Oculudentavis was never a bird or a dinosaur.

The Bible warns Christians about this type of so-called science, where philosophical views trump factual evidence:

For the time will come when they will not endure sound doctrine; but after their own lusts shall they heap to themselves teachers, having itching ears; And they shall turn away their ears from the truth, and shall be turned unto fables. (2 Timothy 4:3-4)